Local gems in the overlooked periphery of Tokyo

Outside the sphere of top sights and must-see spots in Tokyo, the neighborhoods which wrap the city seem to stretch on forever, setting the scene for daily life. Musashi Koyama Station sits on the edge of what feels like inner Tokyo, but that doesn’t mean it’s any less magnetic. On any given day, streams of suit-clad workers step off the train here, stopping off at one of the numerous eateries and bars around the area on their way home. This surprisingly bustling area in Shinagawa Ward has a lot more going for it than first meets the eye.

Arriving at the top of the station escalators, the glitzy neon sign that hangs over the Palm shotengai (traditional Japanese shopping arcade) immediately draws the eye. Whilst the area is far from the quaint historic image of traditional Japan, it’s a perfect illustration of Japan’s modern past and its 20th-century push for development. When completed in 1956, Palm was dubbed “the best arcade of the Orient” and at 800 meters long is currently the longest covered arcade in Tokyo. Enter this mammoth of a shotengai and you’ll find yourself in a wonderful world of low-key local lives, older generations pushing their bicycles alongside lively families and young couples.

Made up of around 250 shops, the vibrant shopping street is a medley of the usual chain retailers, 100 yen shops, pet shops, drug stores and shoe retailers. But punctuating the well known names are noteworthy old-world gems that tell the history of the area. 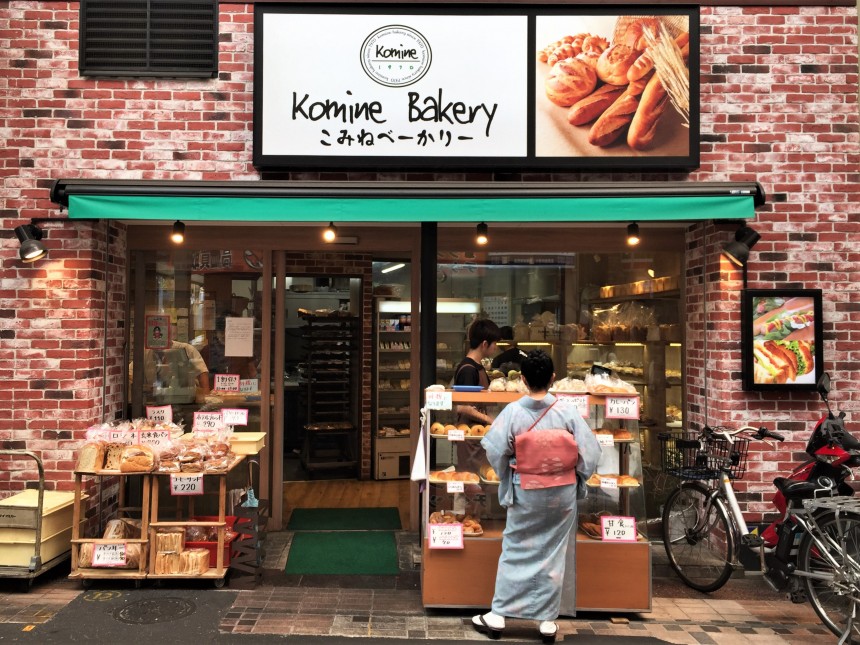 Serving its homely baked goods to the local people since 1970, Komine Bakery has to be one of the best places to buy anpan (a sweet bun with red bean paste) in Tokyo. The stall that sits in front of the main shop displays a variety of buns for passersby to gaze at. Fresh, flavorful, but not sickly sweet, the buns are thin-skinned, tappuri — packed full with fillings — and priced at around ¥100. There’s the rich and dark mashed red bean (tsubu); the sesame (goma) that oozes black with a deep flavor; the green bean (uguisu) is thick and sweet, and the chestnut (kuri) crunchy and rich. Though jammed full of bread and bento (lunch boxes) it’s the various varieties of sweet bean buns that will keep you coming back to Komine for more.

Next door, the waft of flame grilled chicken might lure you into another pit-stop before you even have a chance to think about what you’re doing. This stand-up kushiyaki (meat skewer) shop named Toriyu (鳥勇) can be easily spotted by its billowing smoke and a constant throng of diners eagerly tucking into meat skewers— but your nose will notice it first. Hugging a corner of the far end of the shopping street, the Ebara end, this stand up kushiyaki joint isn’t a luxurious place. Stand at the shop window, select the sticks you want to eat from the grill, slather on some sauce, enjoy. Once you’re done, hand over your used sticks to the no-nonsense cook and he’ll charge you for the number you ate. Beer is also served. A simple, cheap and delicious diversion.

For something a little less rushed, there’s the option of stepping into another era entirely. Hidden upstairs in a small side mall, Taro Coffee (珈琲太郎) is a charming coffee shop that’s been steadily serving a stream of customers since the 1970s. 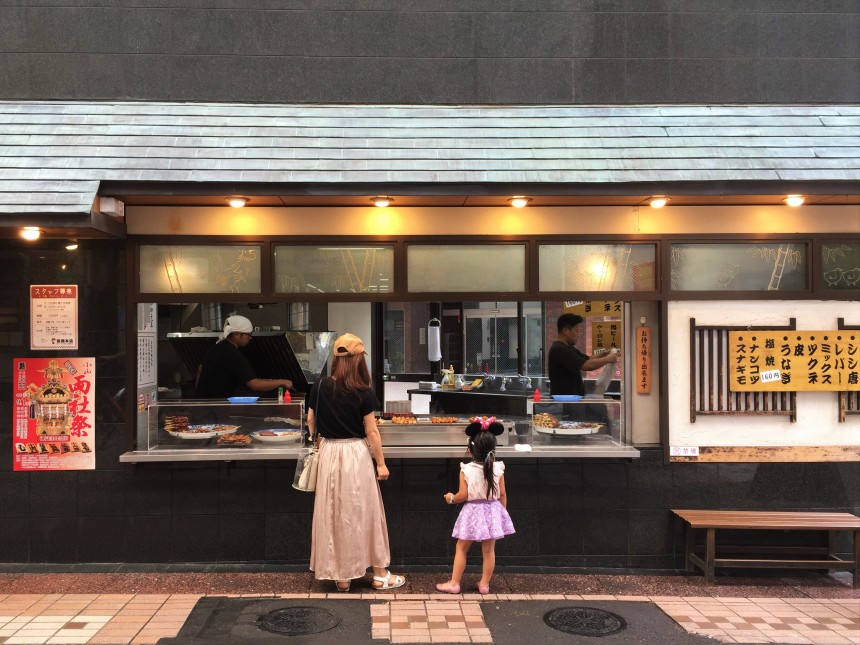 Inside are warm earthy tones, retro house plants and dark wood panelling which ushers customers into a space that inhabits a realm so far apart from the smartphones and high-speed trains which plague modern life. Get your fill of Japanese takes on old school Western food (yoshoku), from spaghetti napolitan, to half-loaf-sized butter toast. The coffee here is punchy and there’s a menu of single-origin coffee beans that predates fashionable syphon coffee joints and hip cafes. The elderly couple who run this special place are gentle and stoic, single-handedly pouring the coffee, making the food and manning the till. As you sit and sip your steaming brew, it’s difficult not to wonder who’s been here before, about the lives of the couple, and how beautiful places like these will keep afloat in our continuing digital age.

Away from the covered shopping street, Musashi Koyama has even more to discover. The area is the proud owner of Shimizu-yu, a venerable onsen established in 1924. This local family-oriented onsen beckons bathers with glowing lights and a shrine-like, stripped-back, natural wood exterior. Within you’ll find two types of hot springs to bathe in. Pumped from over a thousand metres below the city, the opulent-sounding Golden Hot Spring (黄金の湯, ougon no yu) is a steaming, iodine-rich pool, said to soothe muscles and ease tiredness. The second is the Black Hot Spring (黒湯温泉, kuroyu onsen): it moisturises, combats skin conditions, and generally makes you more beautiful. Aside from the two speciality baths, there’s a variety of smaller bathing options and treatments to enjoy, including a “bedrock bath” which is meant to help with circulation and anti-ageing. 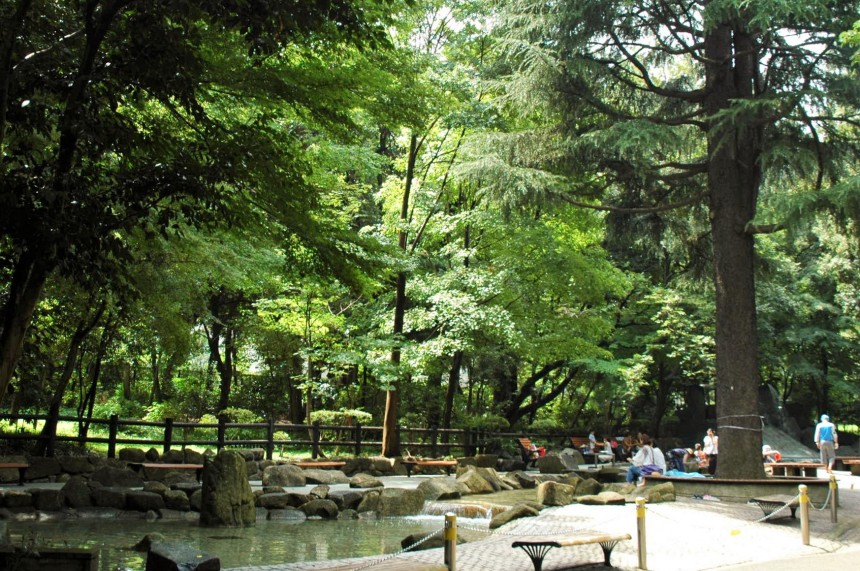 A short walk from Shimizu-yu, Rinshi-no-Mori Park (林試の森公園) is a treat for any nature lover who craves space and greenery among the tarmac streets of the city. The large park was started as a forest experiment in 1900, when trees from across the globe were planted in the area for scientific study. Opened as a public park in 1989, the arboretum is now a unique area in the metropolis to wonder curving walkways, stroll over bridges and amble under the greenery. In fall the trees are aglow in an array of reds and oranges; in the spring, the park is packed with picnicking parents, and in the summer months the small splash-park makes the trees echo with the sounds of children’s laughter.

Spliced between the rush of busy commuter trains and sky-splitting buildings, it’s easy to skip over Musashi Koyama. What at first simply appears to be a gaudy neon shopping arcade hides within itself a fascinating but overlooked history. The assortment of shops, eateries and amenities fill the record-breaking shotengai to serve the hardworking residents — not tourists. Offshoots of side-streets hide a selection of late night bars and kooky restaurants. Musashi Koyama is an area waiting to reward curiosity with its underrated mix of unpretentious nostalgia and contemporary convenience.

All photos by Becky Saunders