Japanese capsule hotels have become famous (or arguably notorious) as a novelty that takes urban space efficiency to an extreme…but mostly for just being weird. Western tourists can’t help but get a dose of “odd Japan” with a stay in one of these hospitality coffins. At this point, capsule hotels have the international recognition of say, Gudetama or warmed Toto toilet seats. But the odd accommodations market in Japan has gotten crowded as of late with the launch of Henn na Hotel. Hen, meaning strange in Japanese, signifies the hotel chain’s embrace of the weird with what has been dubbed Japan’s first robot hotel.

Henn na Hotel debuted in Nagasaki Prefecture back in July 2015 and the idea of staying in a hotel staffed almost entirely by robots caught on quickly, with clickbait-ready headlines hitting English language websites soon after. Now the company behind the hotel is looking to build on its initial success with three new locations in the greater Tokyo area and plans to expand nationally. At its core, Henn na Hotel isn’t far off from your above average business hotel. While the furnishing is clean and well-designed, the rooms aren’t necessarily spacious and the hotel seems to prioritize keeping nightly rates low over providing a luxury resort hotel or ryokan experience. As a result, the draw to Henn na Hotel is most certainly its bells and whistles. More specifically, the robots.

When you walk into a Henn na Hotel lobby you’ll likely end up face to face with a dinosaur. The hotel reception desks are manned almost exclusively by velociraptor robots (the reasons for which are still unclear to me) with the occasional humanoid attending to one of the counters. The robots aren’t just there for show, they move and talk to guests (English language options are available), walking them through the check-in process at touch-screen terminals before a card key is printed for elevator and room access. A relatively smooth process, this idea of a human interaction free check-in will appeal to the introverts of the world, cutting down on formalities and making the process more efficient. The velociraptor robot interaction will appeal to the kids of the world; Henn na Hotel has branded themselves, in part, as a family-friendly hotel experience. The look of awe on a toddler’s face when the dinosaur robot starts to talk may almost make the whole stay worthwhile. 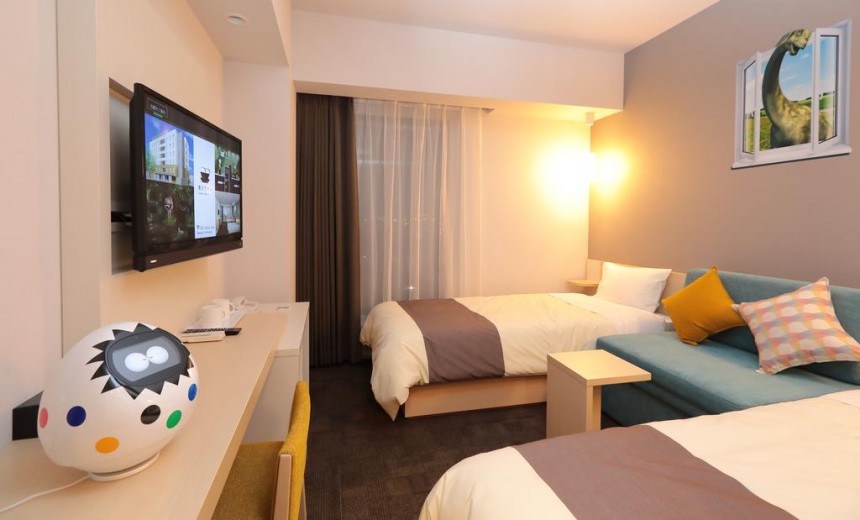 It’s not just the reception desk that has earned Henn na Hotel the title of “robot hotel.” During my visit to the Maihama location in Chiba, I was not only greeted by a velociraptor in the lobby, but also a water tank filled with robotic fish, a T-rex couched in jungle greenery that welcomed me with a growl and a friendly recycle bin on wheels that talked to guests. Each room is also outfitted with a kawaiified virtual assistant, similar to Amazon Echo, that you can ask questions about the weather or anything else on your mind. For international visitors, the hotel also provides your own smartphone with WiFi access that is filled with info about local tourist attractions.

Among the Tokyo hotels, the Maihama location is the most family focused, with a dinosaur-themed breakfast and lunch on offer. Just over the Tokyo prefectural border, Henn na Hotel Maihama is within walking distance (and an easy bus ride) to Tokyo Disneyland and Disneysea, a convenient and affordable alternative to the theme park hotel’s five-star prices. For the adults, Maihama is home to Ikspiari, a large mall adjacent to Maihama Station that boasts a large selection of fashion brands, restaurants and even a movie theater. Henn na Hotel Nishikasai, in Tokyo’s Edogawa ward, offers complimentary shuttles to Disneyland, as well as access to the area’s own Little India neighborhood. In the place of a dinosaur restaurant, the Nishikasai location features an onigiri cafe for breakfast. The other new addition is Henn na Hotel Ginza (located near the Tsukiji neighborhood) which cuts down on the dinosaurs (replaced here by creepily real looking reception ladies) to cater to a business professional clientele, perhaps looking for a place close by after a nomikai. While each hotel is customized to its location, they all share the same basic features and they all, most certainly, bring the weird.

Redefining the standards for short city-stays and serviced apartments

Stylish accommodation in one of the most popular neighborhoods in Tokyo

Premium ‘sleepovers’ in the trendy neighborhood

Rugby-Themed Hotdogs and Burgers at The Oak Door

A delicate fusion of art, culture and cuisine completes new hotel in Ginza