Whether it’s under the name Stephen Lee Bruner or — more famously — Thundercat, there’s a damn good chance you have jammed out to at least one of his songs, or one of the many he has helped create. From Kendrick Lamar to Mac Miller, Erykah Badu to Bruno Mars, Thundercat has flexed his musical chops by way of singing, producing and laying down soulful, mesmerizing bass chords with some of the world music scene’s hottest artists for almost 20 years. He has even collected two Grammys along the way.

When he’s not on stage or in the studio, Thundercat is most likely nerding out with superhero and horror movies, cameoing in the Star Wars galaxy or neck deep in everything Japan as a self-described Japanophile.

With the two-year-long entry ban finally lifting, allowing him to finally conduct his Japan “It Is What It Is” album tour (and also re-up on anime statues), Thundercat sits down with Metropolis in Tokyo Midtown to discuss music, anime and finally being able to return to Japan.

Metropolis: For those who may not be aware of who you are or what you do, how would you recommend first-time listeners dive into your discography?

Thundercat: A good introduction to me would be the IDGAF video Zack Fox and I shot. Actually, I don’t know, every album is different. I mean there aren’t too many just yet, so just start from the beginning. It’s only five albums.

M: The number of musicians you have been able to work with over your career is astounding. When thinking about all the songs and projects you have worked on, what do you find more fulfillment in? Creating your own music or collaborating to help others reach their goals?

T: I feel like they’re one and the same.

With everything from the pandemic to the way of the world, there will be times where I’m more in contact with people and genuinely put myself out there, but I’ve had to kind of go more inward with my energy. Things just change over time.

But in the end, the truth is that I still try to treat other people’s music like it’s mine too. 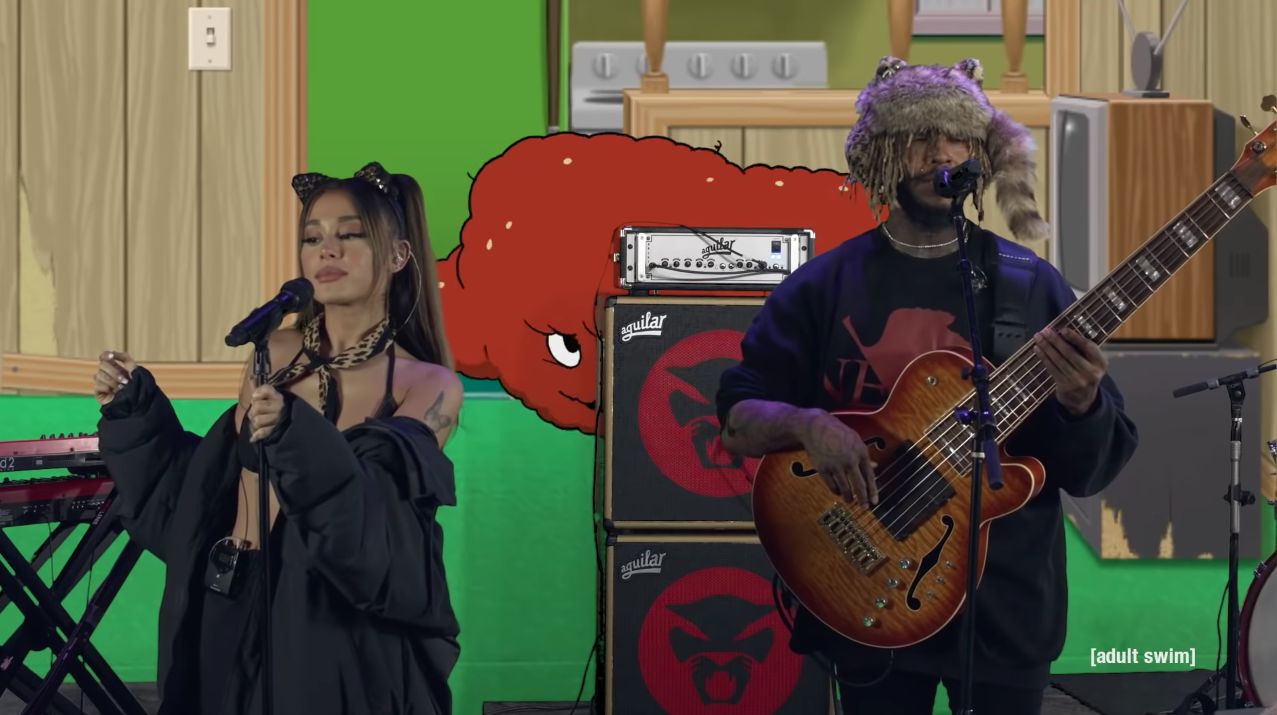 M: Many people outside of the Southern United States might not be too familiar with the chopped and screwed music genre. Having one of your own albums receive the treatment, which non-conventional music piece or album would you like to hear chopped and screwed?

T: Woah. All right, hold on. [He suddenly takes off his shades].

I’m trying to think of a singer because a rapper feels like it’s too easy. There are two out of the gate that pop into my mind: Glen Lewis and Dwele. Dwele chopped and screwed, now that’s the subject.

M: There are probably other people like myself out there, who grew up in a household, where music like heavy metal was off-limits, which eventually leads them into having a hard time getting into specific genres of music. As someone that has mentioned that their favorite album from the last 25 years is Slipknot’s self-titled album, do you have any tips for people opening up and exploring different types of music?

T: A lot of the time, whoever gets it, it’s for them. It couldn’t be for anybody else. If somebody was trying to open up to the idea of listening to Slipknot and they’ve been listening to Deitrick Haddon all their life, those two worlds don’t mix.

If I had to try to turn somebody on to it, I would try to get them to understand the level of musicianship and the imperativeness of what they’ve done for musicianship and rock music. I wouldn’t just immediately throw them on “Sic,” “Wait and Bleed” and “Eyeless,” trying to get someone to try and understand the lyrical content can sometimes be immediately scary. But when you hear what they’re doing musically, it’s undeniable. So you can either you either like it or you don’t. Just play them a few tracks and see how they feel about the music. 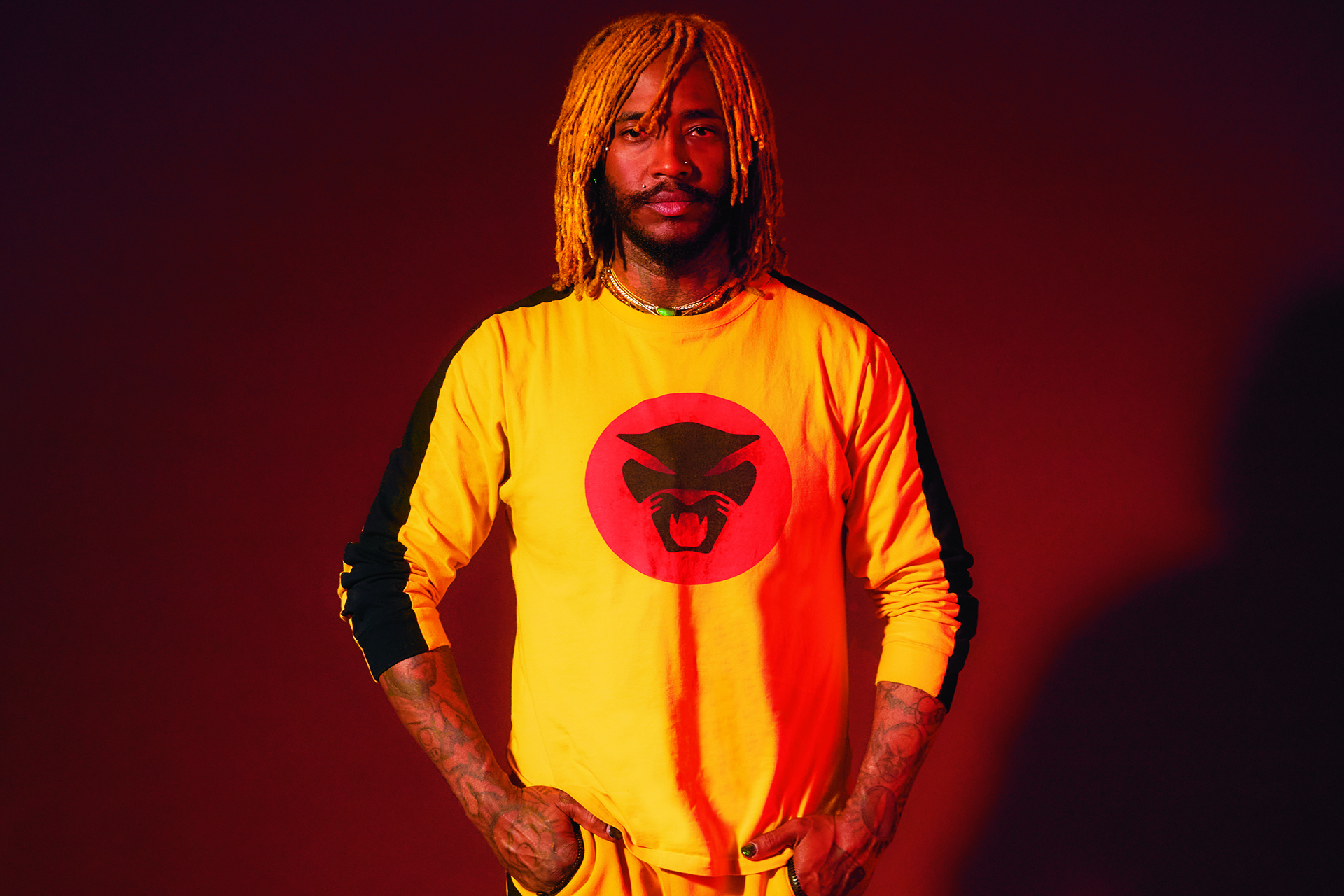 M: It seems that most of the world is slowly moving forward through the pandemic, hopefully. Looking back through the past two years, were there any particular media that helped you get through it?

T: Hell yeah, Naruto. It will always be Naruto and Dragon Ball. You know, the hits. Nothing but the hits. Big Lebowski. More Naruto. I’ve probably watched Naruto like five to six times.

During the pandemic when it first started, I was talking to this girl at the time and I was like, ‘you know, we have nothing to do, let’s start Naruto’, and she was like, ‘okay.’ We sat down for almost two in two and a half weeks watching it every day, every episode. Of course, by the time we get to the end, we’re in tears. And then I did it again after two or three months. Then I waited and I was like yeah, let’s do it again.

M:  You skip the filler episodes?

M: Something that helped many, including myself, get through the pandemic was the album “Circles” by Mac Miller. Unfortunately, it doesn’t seem that his influence didn’t have the chance to take root as it did in America. As a close friend of his, what do you think made Mac and his music so special?

T: His heart. Mac’s music was special because of his heart and how much he cared about what he was sending out. He was overqualified for the job as a rapper.

As a songwriter, he ventured out into places unknown. Sometimes that’s all you could ask for in a songwriter. I think about the moment we met, where it was just him finding value in me being involved with his music.

I tend to laugh a lot at stuff, even if it’s not funny, I’m always laughing, I think there was this moment where I think he saw it too and went with it. We would sit and just talk about stuff. The inner dialogue was in the music and the outer dialogue was conversations we had.

Out of everybody that I’ve worked with, I still have yet to work with somebody that personable, with that much to give and so much to offer. There was no stone unturned with this guy. You’re not gonna come in here and out rap him, yeah, you can come here to play an instrument, but can you write a good song? That’s the question Mac would ask. You could be an amazing musician, but let’s write a song and see if it means anything. That’s why I love Mac. 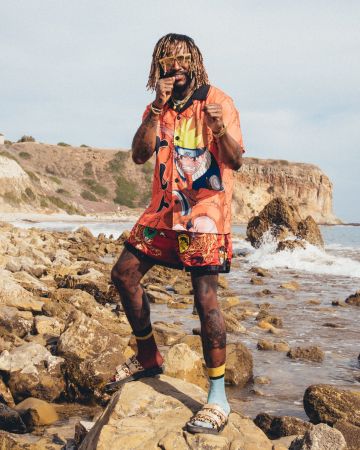 M: Sadly, Japan has been locked down for the past two years. Now that the gates are finally opened up for foreign musicians, how does it feel to be one of the first big artists to return to Japan?

T: They’re gonna have to cut my credit card up.

I’m so happy to be here. The funny thing is, no matter who I’ve been dating at the time, they always say ‘I want to go with you to Japan because you seem really happy and probably way more pleasant over there.’ For me, it’s just reliving my childhood that was riddled with Japanese culture.

M: For other artists with plans to travel over and even the tourists who have been waiting two years to enter Japan, what are some things you recommend they add to the itinerary for all those into otaku culture?

T: One thing that breaks my heart is that the Gundam Cafe closed down. It’s wild, but I hope it leads to something eventually bigger and better.

Akihabara is still old tried and true, Kotobukiya for sure. Oh! And Nakano Broadway. I think they’ve tried to keep it hidden for a while, but that place itself is all you need for everything you’re looking for.

M: You got to meet Sumire Ueasaka while you were here, are there any other Japanese voice actors, musicians or celebrities on your list to meet or collab with?

Everybody knows that Ryuichi Sakamoto is one of my favorite musicians. I would love to get a chance to work with him a bit more. There are a couple of others that come to mind that I would love to work with as well, Akiko Yano and Tatsuro Yamashita. But I think with these types of things, they have to want it to happen too.

M: Has your current trip influenced your music in any way so far?

T: Always! I love Japan and I love Tokyo. It will always be a part of the creative process creatively.

M: It used to be easy to keep up with anime and superhero stuff, but now it almost seems impossible with new content dropping every week. How do you find the time to keep up with it all in between projects and tours?

T: I’m not. I’m not able to keep up with everything. There’s too much. A lot of the time it has to do with word of mouth. Well, really It’s always been word of mouth though, as an anime nerd.

It’s just like comic book stuff, you have context, setting and satire but there has to be a good reason to watch it. A lot of the time, things that are new to us or get discovered as a really good anime, it’s after it’s been out for a few years. There’s such a broad spectrum of anime now, they make anime about everything, it can be about toilets or the leaves on a tree. Yeah, it’s cool, but when you find the golden stuff? You pass it on.

Amongst my friends, there’s like this thing where I become like Jiraiya (an older, mentor character from Naruto). Every now and then my friends come up to me and ask if I watched something already, and I’m just like ‘yeah’, but I try to pass recommendations along as much as I can. 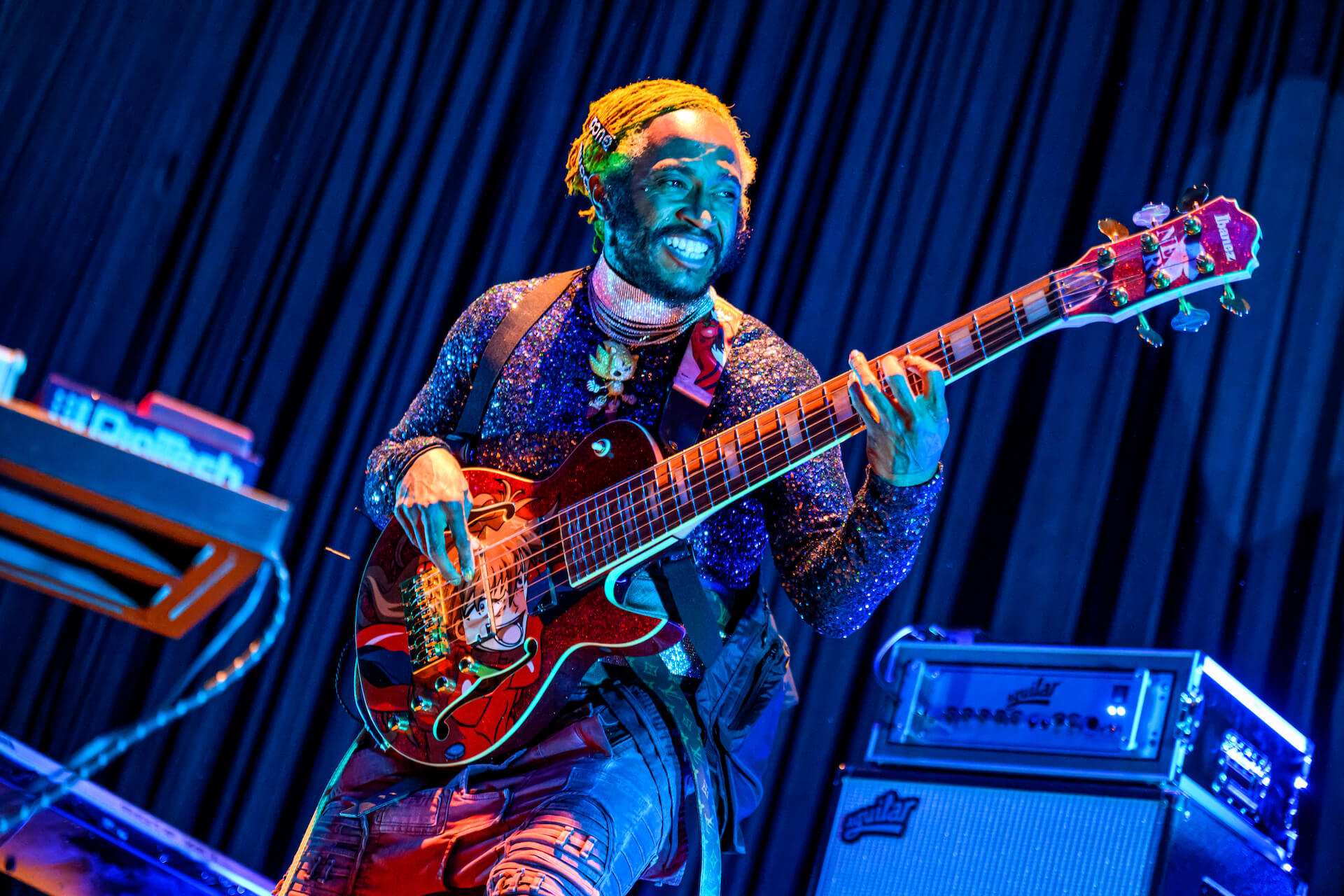 M: With your role in “Boba Fett,” you have now somewhat become canon in the “Star Wars” galaxy. If you had the chance to double up on Disney paychecks, which Marvel character would you like to play?

T: As for “Star Wars,” I would love to come back if they would have me. It was fricken awesome. Even if they just shot me in a background sequence or started a war and blew me up in a club.

In the Marvel Cinematic Universe (MCU), I would like to own a donut shop in a Thor movie. He could come in and use the word ‘brotha,’ so it’s really awkward and I just sit and stare at Thor, like ‘damn bro, you didn’t have to go there.’ 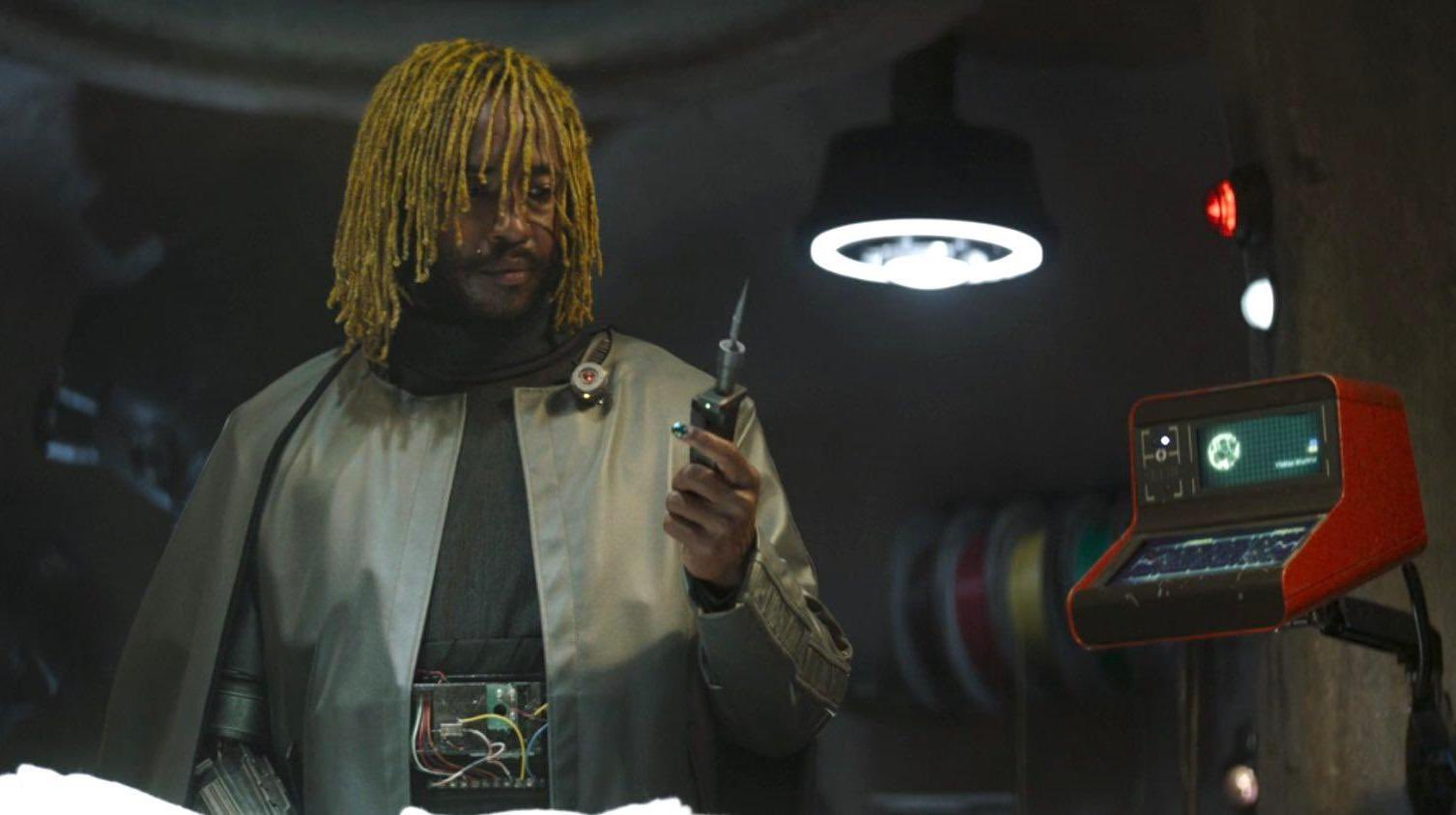 M: Sticking to the topic, if you were creating the soundtrack for an MCU movie, which artist would you reach out to for features?

M: What can the world expect next from Thundercat?

Thanks to the Beatink team for organizing the interview.