A bar with an open menu 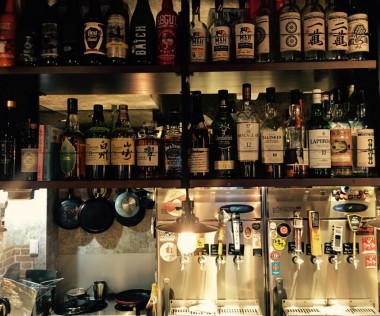 In the narrow side streets around Tokyo’s Iidabashi Station, there are numerous bars and eateries for you to choose from. One in particular, Hop-Scotch, is redrawing the traditional boundaries of what a bar offers.

The bar is owned by an Australian husband and wife, Luke and Jules, who are locals themselves. Behind the bar you’ll find Yusuke. He has been the manager since the doors opened, and brought with him fifteen years experience dealing with whiskey. Daily, he adds a new beer to the shortlist on the handwritten menu above the bar.

Beers don’t last long here; even the popular ones will be off the menu within a couple of kegs. Hop-Scotch’s aim is to keep themselves and their clientele up-to-date with what different breweries are producing by keeping an open menu.

However, the whiskeys are handled differently. The whiskey menu is set, with a focus on the limited and hard-to-get releases. One on offer, for instance, is from a young distillery located 200 feet below sea level: Milk and Honey in Tel Aviv. There were also many other bottles on the shelves with similar stories, giving Yusuke a chance to flex his knowledge. 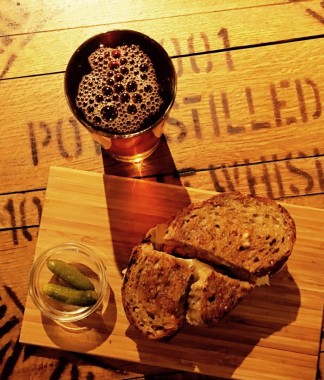 I ordered an imperial stout from Seattle, Washington, which was recommended as a pairing for the Reuben sandwich that I’d also ordered. While I sat and looked around, I couldn’t help but notice the beer labels stuck on the walls, displayed and earned like the badges on a boy scout’s uniform. I was taken aback by how many breweries had been served in the bar in the two years since it had opened, and wondered what the walls might look like in another two.

After I finished my sandwich, I ordered a serving of pulled pork sliders. The menu serves a mix of different pub foods, with offerings such as the chicken or vegetable quesadilla, fish and chips, gyoza and, on Tuesday nights, baby back ribs. Hop-Scotch also holds a number of events including the Cook-Your-Own-Takoyaki night, where everything is supplied. There is also a Showa Kayo night, hosted by a local DJ playing live tunes all night, and a Tap Takeover night, which is one of the few times that you might see a beer run through the taps for a second time. Tap Takeover nights give a brewery an opportunity to show a selection of what they have or a new release. Yusuke and the owners prioritize keeping a close connection with the brewers and distilleries by visiting them regularly. 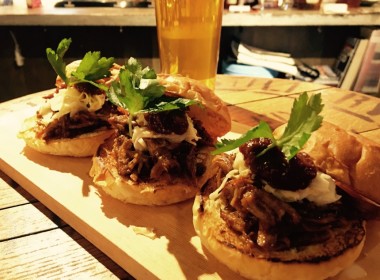 While I was at the bar, a delivery of two kegs arrived, both no larger than a gallon of paint, and I finally got the appeal of craft beer — the creativity of the craft of brewing. The beers you drink at Hop-Scotch or similar bars aren’t sent out of shipping facilities in twenty- or forty-liter units, but in four, eight, or ten, delivered door to door like a care package from back home.

I might have stepped into Hop-Scotch as a novice about the craft beer scene, but I left as an enthusiast for the craft of brewing.