*Names have been changed to protect the privacy of interviewees.

The night before coming to Japan, I couldn’t sleep. I kept thinking — what’s going to happen? Will I survive this trip to the airport? I deleted almost a thousand pictures from my phone, and needed to make a new social media account with only non-political posts in it and only added friends who didn’t have political pictures on their profile.

During the pandemic, many may have felt something in common: stuck. With life seemingly put on pause — travel bans, remote work or school from home, restrictions on social gatherings — the usually-bustling metropolis has been taken down a few pitches. For many of the contingent foreign population, for whom may live in Tokyo but home is elsewhere, the compounded isolation reaches another level. For the Burmese student population in Tokyo, they perhaps know that fear better than anyone else.

Myanmar has been struggling through the most difficult period of its history since the February 1 military coup, which ousted the country’s elected leaders from power. Since then, civilian forces have been protesting, at first peacefully, but inevitably, with force. The military crackdown has been marked by widespread, methodical armed warfare leading to the deaths of over a thousand people, and causing over 370,320 Internally Displaced Persons (IDPs) fleeing from the conflict and searching for shelter and other basic necessities by the end of 2020.

I spoke with a few Burmese students in Tokyo, who arrived in Tokyo before the military coup, experiencing the harrowing plight of being here, safe, seeking contentment and a future in Tokyo every day, while there’s a war waging back home.

“I deleted almost a thousand pictures from my phone, made a new social media account with only non-political posts in it and only added friends who didn’t have political pictures on their profile. I was preparing in case they interrogated me about my background, since they target young people.

“I used to go out and protest in the streets with my cousin, but we were always ready — when we heard any bombs or gunshots, we were ready to run away and leave.”

According to the Assistance Association for Political Prisoners (AAPP), since the coup 7,553 Burmese have been arrested, charged or sentenced, and 1,293 have been killed by the junta.

“I couldn’t wear black, white or red, because it might be taken as a sign of protest. I had to put on this guise of having no political affiliation or political opinion whatsoever. I was muting my voice for the sake of my family’s safety and my own.

I have a friend that was organizing a fundraiser with her high school friends for the Civil Disobedience Movement (CDM).”

The CDM is a movement of civil servants — bankers, lawyers, teachers and more — who have been so essential to Burmese society, first demonstrated against the military regime by refusing to work in their respective fields.

“My friend’s convinced that there had to have been a traitor — one of her friends — who double-crossed the campaign. The soldiers came to her house that night and took her away. My mom and my sister and my cousin were all calling me and telling me to delete any single social media connection I might have with her, because the military could trace it back to me and I could be charged with that evidence.”

Recently, the French Senate unanimously recognized the National Unity Government (NUG), which won the Burmese public’s electoral favor before the military coup, as Myanmar’s legitimate government. ASEAN, despite facing international pressure for inadequate action against the situation in Myanmar, also made a bold statement by choosing to invite a non-political representative, over a leder of the military junta, to a regional summit held on October 26-28.

“We were insistent on asking help from the UN, but then we realized that we can’t do that and that they can’t help us anyway.”

“I didn’t show much care for my friends in Hong Kong when violence was happening to them, I only asked about the situation briefly. I think it’s human nature that you won’t feel it unless you’re involved in that situation personally yourself.

So much has been happening these days, even though it doesn’t get media coverage.

We started off with peaceful protests hoping that the military would eventually surrender. But now, the only way to take on the military is to use force. To use weapons and to kill them as they have killed thousands. That’s the only way we know how to take power back.”

Recently, young people have been escaping to the ethnic regions of Myanmar to receive training, to later return to the city and retaliate against the military. But, the military is armed with heavy weapons, supplied from Russia and China.

“We, the civilians, don’t have any connections with huge external organizations like those — we don’t have enough weapons. Think about it: as a young person, training for about six months, compared to these soldiers in the military, who have been training for the majority of their lives. Compared to that, your power is incomparable.

“Anything violent is not good, and that’s undeniable, but that’s the only way you can do it as a civilian.”

Myo Min knows the comfort he has in Tokyo is one not afforded by others. His indignation is grounded, not just as it is with their generation in Myanmar, but it is also rooted deeply.

“My cousin recently passed away. He was 26. Before the coup he was working in a pharmaceutical company and was planning to come to Japan. In Myanmar, we have this national ID card that recognizes you as a citizen of the country. Without it, you can’t leave the country nor apply for a passport. Because he was of a different ethnicity, it typically takes someone like him many years and a lot of money to get it done.

“So he waited for years for it to be issued, and right when he was about to get fingerprinted for the card, the coup happened. He joined the protests and was receiving training in a rural area. Although they were in hiding, the military managed to trace the camp’s whereabouts, and he was killed during an attack.

“I gave him my hand-me-downs. I spent my childhood with him.” 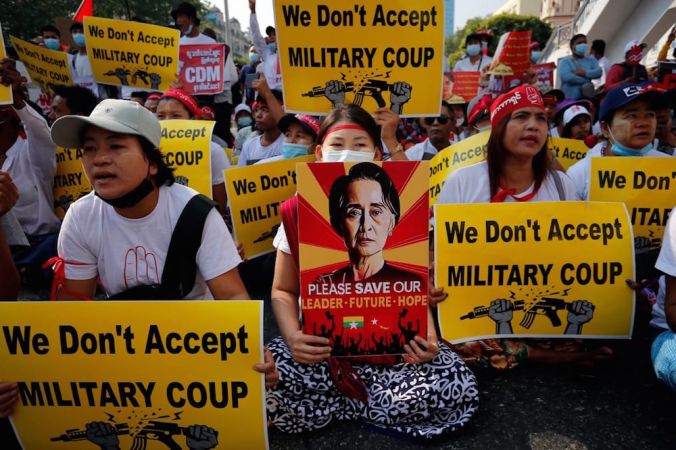 Myo Min was disillusioned and frustrated with the education system he experienced growing up in Myanmar. After studying English and new avenues of education and opportunity opened up for him, he knew that in order to succeed he needed to pursue his education elsewhere.

“I hated every aspect of my life in Myanmar. I was so desperate to get out of the country. I have a different view now.”

Like many foreigners new to Tokyo, it took a while for him to be comfortable here — working odd jobs nearing the maximum legal limit of working hours, going to a Japanese language school — but Myo Min can declare: he made it.

“It’s quite embarrassing to think I feel safe here. It’s also embarrassing to admit when you feel happy or satisfied, of hearing soldiers killed because you think they deserve it. You can’t help it.  It’s the kind of feeling you get when you watch a movie or read a book about someone taking advantage of someone’s vulnerability. But then it’s happening to me now. As we speak, just getting involved in political activity brings the chance of being targeted, even if we’re abroad.

“We have to do what we can. We need to educate ourselves and engage in political activities abroad, because young people are sacrificing their lives to save the country. To save their own future. Why should I be silent and abandon my country, and do nothing while I’m here?

I was planning to go home, but then the coup happened. For many of us Burmese here in Japan, we lost our homes. There’s the risk that if you do go back, you’ll be detained, killed or tortured to death. It can happen to anyone, especially if you’re politically involved. It’s simply not safe to go home.

“To be in a safe place when all of the people you care about can’t afford that kind of safety? It’s the survivor’s guilt of you being able to live normally”.

Thuzar, is an English teacher in Tokyo, and she feels for her Bermese students.

When she was a child, all she wanted to be was an artist. She loved to draw, to create art. She found that Myanmar’s education system, which she calls inferior and constrained, didn’t have room for artists to develop — with no music or art classes in the public education system.

Her parents, like many, saw the paths that studying English could pave for young people. They sent her to an English academy, even though the majority of Burmese students can’t afford to study the language.

If you acquire English, my parents told me, you can go anywhere.

Now, she wants the same for young people in Myanmar. Before coming to Japan through an English teaching program, she didn’t have any big plans.

“I just wanted to live a simple life,” she says, “teaching students and living in my home country.”

And it was a promising endeavor. In 2010, the National League for Democracy government, spearheaded by Aung San Suu Kyi, was supportive of the young generation. It prioritized education, and reassured the futures of young people of Myanmar.

“We could hope to travel and study abroad. Children had big dreams.”

Today, she teaches English via Zoom to a group of 12 students, aged 5 to 12, who are currently in Myanmar.

“Some of my students used to dream of traveling the world, but now it feels impossible for them. They don’t have the confidence to dream.

“For the next 10 years of our lives we won’t know when we’ll be able to go back. There’s this fear that the military regime keeps trying to instill in us, to crush our dreams and ambitions. To silence our voices.”

The future of Myanmar

“Many of us are going through PTSD, because we were waking up to gunshots, and were constantly on watch for military cars in Myanmar,” says Su Myat. “Today, I see it as an opportunity to grow and be stronger. I have to work harder than the other students in my program because it’s not just finding a job, it’s also thinking about the visa sponsorship for the next few years, because I can’t go home for now.”

“People like my cousin, who were killed, are fighting for their own future. For the future of the young people, and even for my future — because I’m one of them,” adds Myo Min. “I have a responsibility for the sacrifices they have made. I don’t want my cousin to have died for nothing. That’s what keeps me going.”

“Some students can’t attend my classes anymore because their entire families are fleeing from the military,” says Thuzar. “I have to try to work for my country and hope for a better education for students like my own. My parents, my relatives keep telling me to stay in Japan. But I don’t want to. I told them, ‘There are people who need me’.”

*Interviews have been edited for clarity and conciseness, and names have been changed.

There are many ways you can help the struggling families, protestors, and IDPs in Myanmar.

If you wish to donate:

If you wish to read more about the current situation in Myanmar:

Heroism as a collective action