“1968: Art in the Turbulent Age” opens at the Chiba City Museum

It begins with a riot. Four black and white photos show blurry street scenes at night. City officials striding forward, police in helmets hunkering behind riot shields, a solitary protester hurling an unknown projectile, smoke dispersing the crowd in opposing directions. Protesters stand on one side, those in authority on the other, making us as viewer, the witness. These photos are the first you encounter in “1968: Art in the Turbulent Age” at Chiba City Museum of Art. They set the scene, some fifty years ago, when politics took to the streets and social change was fought for. 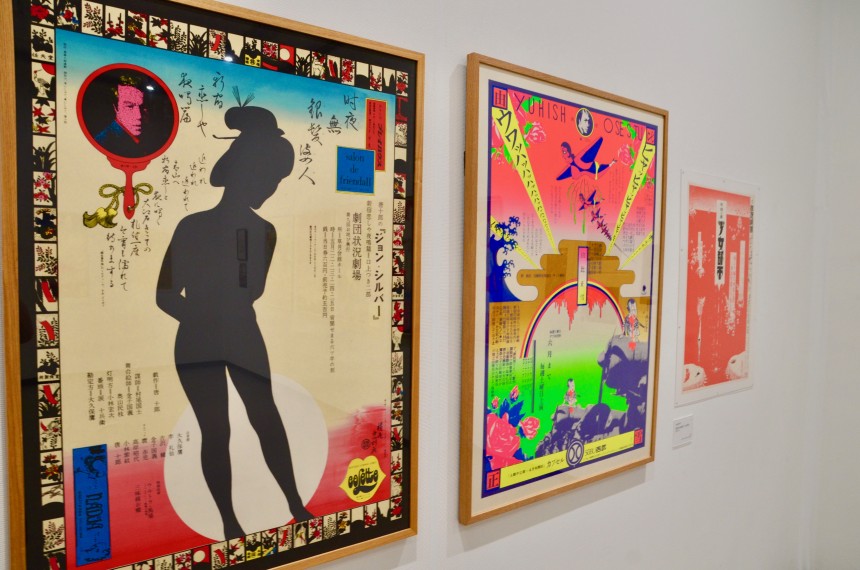 It was in the air. That’s the premise this exhibition puts forward. It’s an appealing idea, to think that in 1968, all across the world, people were mounting demonstrations and challenging the status quo. Politics and political participation changed. Most famously in America, where anti-Vietnam war protests and civil rights marches took place, while a period of civil unrest and general strikes occurred in France. But what of Japan? And how did this spirit influence the artworks made? To answer these questions, the museum’s curators have amassed a considerable number of works created in or around the year 1968.

Spread throughout two floors this exhibition combines art with social history. As well as traditional artistic mediums being on show, so too are collections of printed ephemera. Notable posters, manga and record sleeves catalogue past styles and concerns by writers and designers of the day. The show is awash with event and festival posters. There is a real sense of urgency to print media, mobilising individuals to resist mainstream politics. One sign reads: “2nd Anti-Imperialism International Conference, Tokyo”. It’s hard to imagine an event like this circulating on social media today. It must have been empowering to be part of a movement for change.

Artworks by Tadanori Yokoo, Keiichi Tanaami and Ushio Shinohara use fluorescent color to make an impact. Much celebrated, each of these independent, pop-inspired artists use visually striking means to attract the eye, but their iconography doesn’t always age as well. One of Yokoo’s posters contains a line of women-shaped aeroplanes receding into the distance. In Tanaami’s “1967 Tokyo” a kaleidoscopic pattern of women with their hair in pigtails rain down from the sky, while Shinohara depicts stylised images of Japanese women without any facial features. 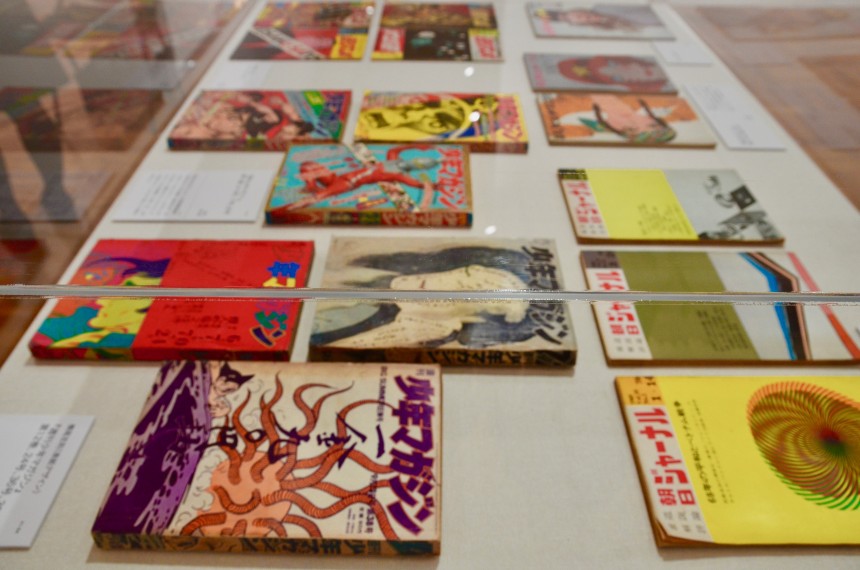 For aficionados of Japanese art history, the show includes artworks by many noteworthy artists including Genpei Akasegawa, who forged a zero yen note for which he was later imprisoned. There is documentation of Mono-ha artist Nobuo Sekine’s “Phase-Mother Earth”, where the artist dug a hole in the ground only to build a cylindrical earth pillar from it. And the conceptual artist and date painter On Kawara has a modest canvas on display. There are also editions of Provoke, the experimental photography magazine, and selected materials by the Kansai-based performance collective The Play.

There is a lot to see. Choosing artworks by the year in which they were created gives the show incredibly broad curatorial perimeters. As important a year it was for social history, as an organising principle for an exhibition it’s something of a catch-all that sometimes results in generalisations. In one room, a wavy pattern is projected on the walls while psychedelic music plays. Although Op Art was an established international art movement by the late sixties, marrying its stylings to counter-cultural soundtracks comes off as vague and nostalgic, when the organisers could have educated visitors with more information about the specific protests or demonstrations mounted.

Curiously, there isn’t a single artwork that stands out as an obvious poster image for the show. Perhaps that’s the way it should be. It’s much more of an anthology that brings together a wide range of artworks and artefacts. More significant than any single image or object, the power of this exhibition lies in how engaging the idea of shaping our society is. The photographs that document the art events and public actions have an immediacy to them that is rarely captured today. While technology enables people to act and movements to form these days, “1968: Art in the Turbulent Age” asks us to reevaluate what impact we can have in our communities and how our actions can influence others; a timely question indeed.