The best in Japanese craft beer

Yokohama saw three days of great craft beer over the last weekend of January. Beers from over 30 Japanese brewers and five importers filled the Osanbashi Hall to the brim and made the 2016 Japan Brewers Cup one of the best yet.

Started in 2013, the event draws brewers, importers, and beer pubs together for beer-focused fun and competition. A panel of industry professionals spent the mornings determining which beers were the best in show, while afternoons and evenings were turned over to the general public. This year, Nasu Kogen’s Royal Stout won the award for best dark beer, while Outsider Brewing’s Enigma IPA edged out a number of imports for best IPA. Hakone Beer took home the Pilsner Prize.

Boisterous drinkers and sedate samplers moved among the various tables lining both sides of the hall, sipping and tasting to see what they might like best. Breweries ranged from small to large and came from near and far to showcase their wares, while a small handful of importers gave the event an international flare.

“I learned I like strong-flavored beers,” said one friend, who methodically worked her way around the room talking to vendors and bringing back sampler trays for our group to try. “This was a great chance to try so many different kinds.”

And she’s right. Events like the Japan Brewers Cup encourage brewers and give visitors an opportunity to find new favorites while exploring a range of brews often offered by a single brewery. Most of the brewers present listed menus of anywhere from four to six different beers, as well as four-cup samplers. 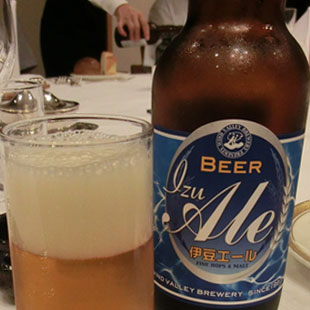 Small brewers from further afield, such as Y. Market Brewing from Nagoya, Kyoto Brewing Company, and Tochigi Brewing Company, were also well represented. Another friend, originally from Kobe, returned to our table with a beautiful amber-filled cup held high over her head. “It’s a taste of my hometown!” she said and proudly passed around Rocco’s dangerously smooth Barley Wine.

The craftsmen and women behind the tasty concoctions were often on hand to serve and talk with customers from start to finish. Shoma Hata from Wind Valley, a recent graduate from Tokyo University, happily described their four brews: a citrus-infused weizen, a saison using a new recipe, a charmingly sweet red ale, and their classic Izu Ale. Wind Valley prides itself on using organic ingredients, including seasonal fruits from in and around their home base in Shizuoka Prefecture.

While the kegs are empty and the cups cleared from this year’s event, it’s worth watching the website and marking your calendar for next year. Until then, keep an eye out for some of the brews mentioned; they’re well worth a sip or two.

The beers mentioned can be found at liquor stores across Japan. For a full list of Japan Brewers Cup 2016 beers, visit www.Japanbrewerscup.jp