Holy matrimony with a dash of drama and divorce

This three-part omnibus largely takes place within a stunning glass, seaside wedding hall and naturally, the theme is marriage (with some divorce thrown in). All three pieces demonstrate the typical Japanese combination of drama, humor, slapstick comedy, surrealism and pathos as they relate stories of love, love delayed, spectacle, struggle and heartbreak. They take place over a three-day period on the Kanagawa coast, with the sea providing shades of symbolism. Acting as both director and screenwriter for their works, the pieces are helmed by Atsushi Hasegawa, Takayuki Ohashi and Keita Taguchi respectively, and star Harumi Shuhama and Takehiko Fujita.

The first segment is Hasegawa’s “Left-arm Psychedelic.” The story revolves around Tokuichi (Fujita) and Kazue (Shuhama) whose daughter Naomi disappears on her wedding day. The couple reminisce about their lives but seem to reach a block when it comes to Naomi. There are hints that perhaps Tokuichi holds the key to the mystery and then, in a wild twist, Kazue discovers a mysterious flying object in the sky. 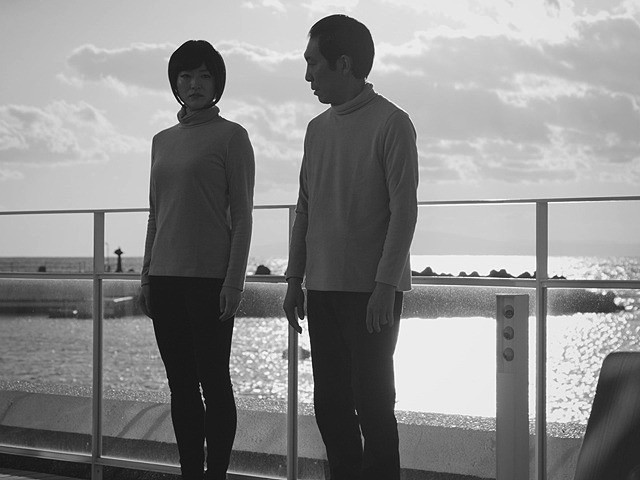 In the second piece, “Best Partner,” directed by Ohashi, Daisuke and Yuko meet at a drinking party. Their respective workmates/computer supervisors, played by Fujita and Shuhama, encourage their love and watch over them. Then rather suddenly it seems like the second pair might head into a romantic relationship as well. It’s not long until the two sets of lovers face a multitude of problems and miscommunication.

The third chapter centers on a middle-aged couple, Yoshio and Aiko, who have decided to divorce. Yoshio’s previous ex-wife and daughter Shiori work at the wedding hall, and Shiori has a boyfriend who is thinking about marriage. In addition, Yoshio and Aiko’s daughter Enka is quite against her parents’ divorce and becoming increasingly rebellious.

All three of the segments have a surreal, dreamlike quality despite being nomi-nally realistic. But a dimension of magical realism slips in there to take the stories in stranger, sometimes comedic, directions. The clever overall structure brings to mind Hal Hartley’s Flirt (1995), one portion of which was shot in Japan, and the Japanese film made with foreign directors, Tokyo! (2008). Both works are trilogies with thematic links that unite their stories. Kazoku Awase may not be entirely successful but the concept and execution is worth examining.