As you walk down Okubo Dori, the main street in Shin-Okubo, it’s easy to convince yourself that you’ve left Tokyo. Neon-lit business signs are written in Korean hangul, young girls swarm over Korean cosmetic shops, and even the grocery stores are geared towards Korean cooking. Sometimes Korean “idols” will stand on the street handing out flyers, creating pedestrian traffic jams on the weekends. Shin-Okubo has been Tokyo’s answer to Koreatown for the better half of a century, welcoming Korean immigrants and serving as a business and social hub for the country’s sizeable zainichi (Japanese citizens with Korean ancestry) community. 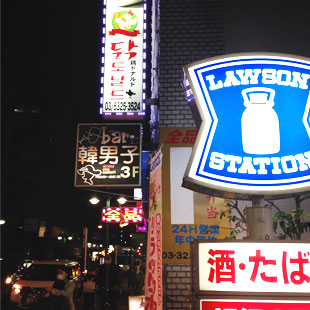 The restaurants are no different—it’s impossible to go half a block without bright photographs of bibimbap with raw egg, or barbequed samgyeopsal outside the store windows.

When Korean cooking is brought up, the first thought that comes to mind for the Japanese and foreigners alike is typically yakiniku (Korean barbecue). While yakiniku is the well-deserved image of Korean cuisine, and is certainly no stranger to restaurants of Shin-Okubo, there’s another style of cooking that is quintessentially Korean, with universally appealing flavors that are routinely ignored.

Chimaek, a combination of “chicken” and “maekju,” the Korean word for “beer,” is Korean-style fried chicken served along with draft beer. In Korean cuisine, it’s the ultimate comfort food. As if American fried chicken wasn’t decadent enough, Korean fried chicken is fried twice. The bird is then served with a pickled radish, to cleanse the palate in between bites and to take the sting out of the spicy sauce. It was first served in the 1960s, but shot up in popularity about 10 years later, when it started to act as a companion food to draft beer. From there, the trend became a national craze, even sparking insanely popular chimaek festivals across Asia, in Daegu and Ningbo.

In Korea, there are chimaek specialists in every neighborhood that don’t need colorful signs, letting the popularity of fried chicken speak for itself. In Shin-Okubo, chimaek doesn’t dominate the landscape the same way it does in Korea—there are no shops solely dedicated to fried chicken—but the treatment of chimaek as a specialty cuisine remains.

One such dining spot is Tori Donaru, tucked away in a three-story building on Okubo Dori, about a 10-minute walk from the station. Tori Donaru is barely noticeable—the sandwich board outside the building only advertises the host bar above—except for a chicken-waving sign that bares the restaurant’s name. The inside is no different to the other restaurants that line the main street: smoky and dimly lit, with a large flat-screen TV in the back, showing KPOP music videos. 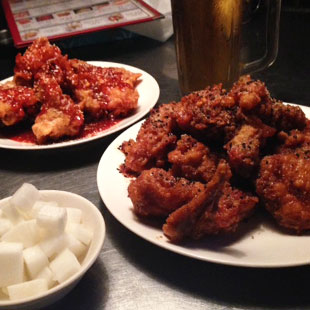 While there is a variety of customers ranging from large groups of friends, couples, and sometimes families, it’s rare to hear a word of Japanese spoken at any of the tables. Almost everyone is smoking while they wait for their food. The music in the background fluctuates wildly between K-pop, unseasonable Christmas music, and American hip-hop. Like most restaurants in the area, they serve people leaving work and out drinking—operating at similar hours to izakayas—starting in the evenings until the first train hours.

While they serve traditional Korean fare like jeon and bulgogi, the entire back page of their menu is dedicated entirely to different types of chimaek. The most popular are at the top, outlined in a special box, with photos. While they also serve roasted chicken, it comes with the option of a generous cheese coating.

When the chicken comes, the portions are enormous and with every different cut of chicken piled high on a plate. It always come with a small bowl of neatly sliced daikon cubes, still marinating, to help cool your tongue and refresh your palate in between bites.

They also offer “plain” fried chicken—if that’s even possible—as well as a variety of Korean and Japanese flavors.

The Korean yanyom flavor (¥1500 half order) is a bright-red glaze that coats the chicken, and is most comparable to a sweet-and-sour sauce. The soy-sauce style chicken (¥1500 half order) is closer to a Japanese palate with its intense, salty flavor. But the salty and Japanese flavors are balanced out with a heaping of garlic and onions, and a just little bit of spice. The daikon takes out the spice, and the beer—Asahi on tap—washes down the salty food perfectly.

Truly, chimaek is Korean food for the soul.