Lifestyles of the Rich and Furry

Pet celebrities and their influence

Two women lean over a pram, cooing and clutching at each other. They squeal “kawaii!” a couple more times, and my friend exclaims, “Is that a cat in there?!”

We slow down and look inside, and sure enough we see the squashed, sour face of a Calico Scottish Fold.

In a stupor, I ask the woman if I could take a photo of her cat. She wore a pink satin bandana tied in a bow at the back of her neck. The chic black pram was embellished with pearls, pink bows, and a polka dot lining. I couldn’t resist posting this lavish cat in its stylish chariot on my Instagram. 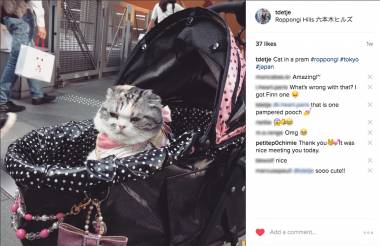 That same evening, the cat comments on my picture saying it was nice to meet me. She even adds a kissy-cat-face emoji. I was a little starstruck, told everyone about it, and felt a weird emotional rush.

Although we dominate the food chain, there’s no denying that humans are often at mercy to animals. We’re instinctively afraid of those that are stronger, faster, and more poisonously fanged than us. And the animals that pose no threat to our safety also have an influence over us.

Kittens and puppies can make even the most spiteful person smile. Photos and videos of animals can elicit physical reactions—from screeches of ”It’s sooo cute!” to hideous snorts of laughter when a cat fails to land a jump. We laugh because we are used to seeing cats as elegant creatures, and a hilarious contrast is created when they embarrass themselves.

Liking cute animals comes from our biological programming to like human babies. When we see something with large eyes and soft (fluffy) textures, our brains flood with feel-good chemicals.

We even seem to love ugly animals if they look cute. A chihuahua-dachshund with a ridiculous overbite named Tuna is adored by 1.8 million followers on Instagram (@tunameltsmyheart). Grumpy Cat, with 1.9 million followers (@realgrumpycat), is loved worldwide for her permanent bitchface. Their imperfections are what make them lovable.

Tokyo has its very own international pet celebrity—a shiba inu named Marutaro. He has 2.5 million followers on Instagram (@marutaro), making him the most popular dog on the internet.

Marutaro has a shop in Nezu, Tokyo. The small store has admirers constantly coming in and out, quietly browsing the merchandise. It must always be busy, because there were two staff members at the counter. 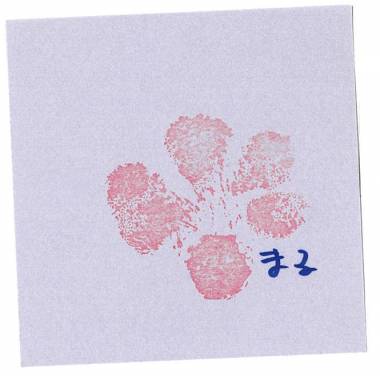 The shop is cozy and the merchandise feels homemade: there are hundreds of printed photos and stickers of Marutaro, books and DVDs about him, life-sized cushions, and even a set of Marutaro fake nails. I asked if he was around while paying for a badge and a calendar, but the shop assistant apologized and offered me an authentic ink-stamped paw print autograph in condolence.

This got me thinking about profiting from pet celebrities. In Marutaro’s shop, there were tote bags for sale where proceeds went to a Japanese pet disaster relief charity. But the rest of the profits go to Marutaro and his owner, through a Marutaro PR and marketing consultancy called Bloomax Inc. At first I felt this was unfair. But why? Some people just have it easier when it comes to making money.

And it’s not as if these guys don’t know what they’re doing—they’re clever with how they use social media. The people behind celebrity pet accounts have tactics, as I saw with my cat-in-the-pram Instagram post. The cat’s owner tracked my post down via my geotag. This diverted my attention to the cat’s account, I followed it, and voila! Soon enough this cat may also be extremely famous.

The influence of pet celebrities is obviously big, and humans can manipulate it for themselves. Pet celebrities often turn into brand influencers, and are paid to endorse products or services in their posts. Brands will hunt them down directly, or the PR people at animal talent agencies will set up collaborations. It’s just another crazy way to make money these days.

But the power of celebrity pets is not only used to make money; some also use their fame to raise awareness about issues such as animal welfare and pet farming.

Now, everywhere I look I see the pet-elite being flaunted around Tokyo, the smaller and cuter the better. “On trend” breeds appear to be toy poodles, chihuahuas, shiba inus, bengal, and ragdoll cats. They’re often on social media, and in public cruising in prams, parading in clothes, or at the very least, wearing clips in their hair.

Pets outnumber children under the age of 15 in Japan, and many people treat theirs like their own offspring. The temptation to accelerate a pet into stardom is very real, but it could further contribute to the problem of Japan’s aging population and low birth rates.

Not only this, but we should remember that although pet celebrities make us smile, they are managed by humans who know just how much a fluffy face with big eyes can melt us.