Mark Osborne on translating the children’s tale into film

Turning a classic story into a motion picture is no easy trick. Staying true to the original while making it work in a new (big-budget) medium requires safe navigation of a numerous traps. Mark Osborne succeeds beautifully with his adaptation of Antoine de Saint-Exupéry’s The Little Prince. The director explains to Metropolis how he pulled it off.

How did you get involved with this project? 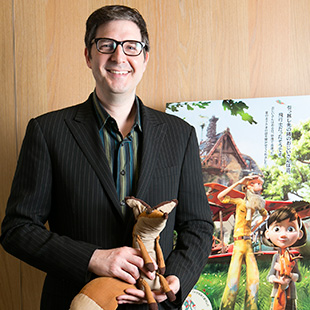 Osborne, promoting the film in Japan

After I finished Kung-Fu Panda, I wanted to go independent. At one point, I got a random phone call from my agent [and he said], “Do you know the book and would you consider making a big animated movie out of the book?” My reaction was, I do know the book—I know it very well, it’s very special to me—and I said it’s impossible to make into a movie. And I said no.

But very quickly I started to realize how much the book had meant to me and how powerful it was in my life. And I thought maybe there is a way to tell a story about the power of the book. And maybe there was a way to preserve the book by making the movie. So that’s when I called back my agent and said, “Listen, I want to meet with the producers and say, ‘Are you open to a non-traditional adaptation that would be more of a tribute?’” And they were incredibly open to it. And I pitched this idea of a larger story around the book to protect the book.

Did you read the book as a child?

I never read it as a child. It was given to me and I read it for the first time when I was like 20. That was my first experience. My second experience came when I had kids and I read it to them. So I sort of re-experienced my childhood in two very powerful ways. One, the first time I read it, it reconnected me to my childhood—not because I read the book as a child but because it reminded me what it was like to think like a child. And then, when I read it to my kids, it helped me, I think, to be a better parent, because it connected me to their experiences in a significant way.

How did the idea evolve to put a framing story around the classic story? 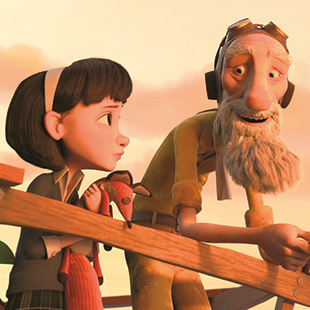 I knew the desire from the beginning was to make a film at the level of a Pixar movie. And I do really believe that the book is written for grownups. It’s a book about grownups reconnecting with their childhoods, and I think grownups read it to their kids as a way to connect to their kids. And that’s part of the power of the book.

All along, my goal was to come up with a cinematic equivalent to the way the book works in our world: in our experiences, in our relationships, the way it’s transmitted, the way someone shares it with us, the way we share it with someone, and also that emotional experience that you can go on when you encounter the book.

How important was it to stay true to the book?

That was the challenge. How do we stay close to the book? Everything in the movie comes from the book, and I’m very proud of that. Even if something seems like it’s way out of left field, actually I can point to the words on the page where the idea comes from.

One of the best comparisons I like to make is that the book is about a middle-aged man who’s broken, who meets a magical little boy who fixes him. In a way, we did the inverse of that: we have a little girl, who is basically middle-aged, and she’s broken. And she meets a big person, a very old man, who is like a little kid. And that little kid fixes her. So there is a parallel, but we’re doing something that is backwards and upside down enough that you don’t recognize it necessarily. It’s an echo.

What do you hope viewers will take away from this film?

Well, it [was] always meant to be the ultimate tribute to the book. It’s my hope that … whether you know the book or not, if you read it a year ago, a month ago, or 20 years ago; I just hope that it gives you an appreciation for the book and I hope that it brings you back to the book. I’ve always said that if people connect with the book in a meaningful or deeper way, or for the first time, then we will have succeeded. On top of that, I hope people cry. I hope people cry a lot.

The Little Prince is currently screening at cinemas across Tokyo. An exhibition of models and original artwork from the film will be held at Yokohama Takashimaya until Dec 24.