I met my friend K outside Tokyo National Museum on a weekday afternoon. It was sunny out, but windy. Ueno Park was tranquil, filled with strolling couples and tourists. I’d gotten lost coming from the subway, and I ran across the street to meet K, who was standing next to the stoplight dressed all in navy. “Hi!” she said, waving at me. I apologized for being late and calculated the time in my head. I’d lost about ¥600, because K costs ¥4,000 an hour.

Client Partners advertises itself as josei sutaffu no benriya, roughly “Female-only Handymen.” Their website lists several examples of what their staff can help with. Some are general—watering houseplants, babysitting, cleaning, setting up Internet—and some oddly specific: “You want to dye your white hair, but can’t get all the hair in the back,” for example, or “For a girl staying at home alone while her family is on a trip, and a cockroach comes out. She wants someone to chase the cockroach out, or to stay with her until morning,” or, “A man in his 30s who wants to confess to someone at work, but doesn’t want to create a bad atmosphere or trouble her. Wants a girl her age to convey his feelings to her.” 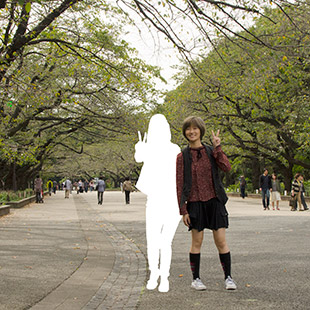 In recent years there has been a surge of media awareness of Japanese services providing what is perhaps best described as purchased intimacy. There are cuddle cafes where you can pay to lie next to a pretty girl, and mimi kaki salons where you can lie in a hostess’s lap while she gently cleans out your ears. While the base model for such services is nothing new—host and hostess clubs have a long history in Japan—and it is easy to view these services in a priapic light, most coverage insists that there are clear boundaries and there is nothing sexual involved. Reportedly, these services cater to simple unmet needs of human connection among the increasingly isolated Japanese people. And so enters the rent-a-friend.

I reserved through the Client Partners website, specifying when I wanted to meet up and what I wanted to do. When I called the office to confirm my reservation, I was asked if I had any requests as to the type of person I wanted. Should she be young, should she speak English, should she like art? The base fee is ¥3,000, and the hourly rate varies depending on the activity. My rent-a-friend would call me once she was at our designated meeting place.

K is a photography student originally from southwest Honshu. She’s what the Japanese call haafu (half), and is tall, fair, and light-haired. When we entered the museum, I paid for our tickets. Not sure on the policy, I hesitated at the counter until K said, “Together, please,” to the vendor. It was the first reminder that this was not a normal friend date. I awkwardly waved off her apologetic “Thank you” and hurried into the first exhibit.

While we were examining the thousand-handed Buddhas and imported ceramics, K and I talked. She was a flexible talker: She had a steady, reassuring gravity offset by an easy, self-aware sort of dry humor. Next to my nervous, slightly rushed chatter she never seemed impatient, answering each of my questions seriously and asking me thoughtful questions of her own. Carefully attentive but never intrusive, she didn’t stick to my elbow but lingered over exhibits she especially liked and took photos with a film camera she’d gotten recently for her birthday. She only took her phone out once, to show me some art on Instagram. I asked about her matching jewelry, including a chunky green bracelet and ring she’d made in a workshop. She mentioned a taste for eclectic fashion but kept it toned down, she said, for work.

She started working at Client Partners after quitting her last job at a studio in Tokyo. It’s a large company, with enough workers that she doesn’t recognize everyone. Her requests run a gamut—often she is called on for housework, though other outings have included, for example, watching three movies in a row with a client. She said the company receives so many requests she is sure to get at least one call a day asking if she can come in. The screening process to become a Client Partner is selective. One of the reasons K was hired is for her height, which makes it easier for cleaning. But another reason is that she has a warm smile—she was told—which makes people feel at ease.

Later we wandered into more personal ground. Walking onto the museum terrace, we looked out over the pond and talked about our families. She opened up about why she chose to go into photography, the internal anxieties she thinks plagues those who choose artistic paths, and the difficulties and confusions of growing up half. I talked about the loose and floating life of an expat, who exists on the edge of several communities. At one point K asked me directly, “Are you lonely in Japan?”

The CEO of Client Partners, Maki Abe, has said that Japanese society changed after World War II. They no longer make connections easily and have grown increasingly closed off. Abe wants Client Partners to help remedy that. K told me there is some truth to the stereotype that Japanese people put on a polite mask while hiding their true feelings. This is partly why, she thinks, the services of Client Partners are in demand.

Yuji Genda, a professor at the Institute of Social Science in the University of Tokyo who studies youth employment issues, coined the term “SNEP” (Solitary Non-Employed Person), a class of unemployed people who “are not married or engaged in study, who are normally completely alone, or who do not spend time with people other than their family.” They are similar to hikikomori, the infamous Japanese term for shut-ins who avoid social contact for long periods at a time.

Twenty years ago, he said, those at risk of becoming SNEPs were often men, those who had only attained a junior high school diploma, or aging unemployed people whose acquaintances have started families. But since the 1990s, these trends are fading as more and more people are at risk of becoming SNEPs, regardless of gender, age, or education. He calls this “generalization of solitude.”

The factors behind this are many and complex. Genda attributes some of the increase to 1998, around the time of the Asian financial crisis and the burst of the bubble economy. The Japanese lifetime employment system was disrupted; the unemployment rate jumped up, as did suicide rates. The generation of graduates from the early aughts is called the “Ice Age Generation.” Even now in their thirties and forties, many were never able to find regular employment, and have no money to socialize.

Another pervasive factor contributing to both unemployment and social isolation, Genda said, is a perceived lack of communication skills. Though the economy is recovering and there are many jobs now available, the industrial structure is changing from manufacturing to more service-oriented jobs. Communication skills are indispensable both for interviews and interactions within the workplace. “Many people feel very high pressure to have such communication skills,” Genda said, but do not believe that they have the appropriate skills.

When asked what is causing the communication issues, Genda brought up a broad demographic problem: Japan’s rapidly aging society. With the declining birth rate in Japan, parents often hold very close bonds with their children; as Japan’s population continues to age, children often take care of their parents, a full time occupation that leaves little time for anything else. Moreover, the generation that flourished in the post-WWII boom were able to accrue high savings, and many families are able to support their adult children if they move back home or are unable to find a job. This creates a deep mutual dependency between parents and children. “If you ask the mother, ‘Who is your best friend?’, the mother often answers, ‘My best friend is my daughter,'” Genda said. “And if you ask the daughter, ‘Who is your best friend?’—’Of course, my mother!'”

But many of the parents of the postwar boom will soon pass away. Many SNEPs now use or will have to use national welfare to survive. Genda worries that this is unsustainable, particularly with Japan’s large national financial deficit. And with their parents’ deaths, the children will be completely alone.

When I told Professor Genda about Client Partners, he looked slightly surprised. He hadn’t heard of the company before. To be effective in combating social isolation, he said, the employees should be professionally trained. Another concern is that SNEPs would not be able to afford the service. Genda’s research finds that SNEPs spend most of their time sleeping and watching TV because it is free; the ¥4,000 hourly fee of a Client Partner would be too expensive. Indeed, K had also told me that many of her clients were people in their forties who worked full-time.

There have been many businesses and NPOs who have sought to address the problem of hikikomori and social isolation. At their worst, Genda said, some businesses have taken advantage of desperate parents and enforced Spartan measures on SNEP children to “strengthen” their “weak” minds. One incident several years ago involved parents sending their socially isolated adult children to work on a yacht. The captain was so violent one person died. Genda opposes such solutions. He spoke approvingly of an NPO that invited struggling adults onto a farm; by farming together, they naturally developed more communication skills with one another. The problem is that desperate families may be easily extorted and unable to distinguish good services from bad ones. Genda thinks that one solution may be for the government to issue a licensing system to those who can professionally help struggling adults.

After publishing articles on SNEPs, Genda received letters from many families who expressed relief that a problem they thought unique to their families was, in fact, common. The issues, he said, are all related: youth unemployment, the pressures of communication, and social isolation. And though terms like hikikomori and SNEP are unique to Japan, Genda believes they may be worldwide phenomena.

“The most important point is to know that we cannot rule out these types of people… to not blame these people themselves. It is a social problem,” he told me. “Anyone can become a SNEP.”

After we left the museum, K and I took purikura in a game center, and she put her hand on my back in one of the photos. We covered the pictures with hearts and stickers saying “best friends.” Then we walked back to the station. K looked genuinely regretful. She said she got a shock of loneliness at the end of each Client Partners session.

For my part, it was dangerously easy to imagine us as real friends. I liked K a lot—her artistic sense, dry humor, easygoing personality, and throaty voice. I didn’t have to impress her. I wasn’t afraid of appearing desperate, pathetic, or insecure. In some ways I was able to be more honest with K than anyone I had met in Japan.

But outside a business transaction with cold, hard cash, we were in dangerous territory. Who knew what she—we—would be like out in the real world, with its ambiguous parameters, unspoken words, and emotional risks?

When we got to the station K and I huddled in a corner while she punched out the time on a calculator. Two hours of her company cost, in total, ¥11,880. Once again, she seemed genuinely apologetic. I paid in cash. I didn’t get a receipt.