Commence the wearing of the green. St. Patrick’s Day is just around the corner, and Japan is preparing to celebrate its love affair with Ireland—a relationship spanning more than three centuries.

Time has strengthened the Land of the Rising Sun’s infatuation with the Emerald Isle. Asia’s first Saint Patrick’s Day parade took place in Tokyo back in 1992—and the tradition is still going strong, beckoning green-clad crowds to march down Omotesando.

But it’s more than just a spirited stroll. Held in tandem with the parade, the I Love Ireland Festival spotlights the culture, bringing together musicians, artists, sports enthusiasts and business experts to show what makes Ireland unique.

According to Haruka Masumizu, PR officer of the Irish Network Japan (INJ, www.inj.or.jp) and additionally of the I Love Ireland Festival committee, which is organizing the event, Japan’s affinity with Irish culture can be attributed to its universality.

“It fascinates such a wide range of people, young and old, irrespective of background or nationality,” she says. “Irish culture—be it dance, music, literature or food and drink—which has always strengthened ties among Irish emigrants around the world, works also to bond Japanese and Irish people together.”

This year marks the I Love Ireland Festival’s second installment, and it promises to be bigger than the last. “Irish music will be the main theme of this year’s parade,” adds Masumizu. “We will have bands and baton twirlers from Japanese universities; Okinawa dancers; Tokyo pipe bands; as well as the wonderful brass sounds of the U.S. Army Band.” 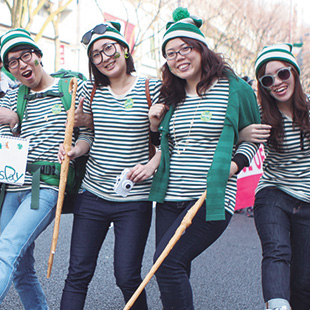 Also scheduled to perform are Beoga, a Grammy-nominated Irish fusion band making their Japan debut; Tricolor, a traditional Irish band comprising Japanese members; and some of the principal dancers from “Riverdance.”

Speaking of the popularity of Irish arts and culture, Festival coordinator Yasuko Teramachi says, “One of the characteristics of Irish culture is its simplicity, similar perhaps to the Japanese ‘zen’ philosophy, which seems to have been forgotten nowadays.”

While there will be performances aplenty, the Japan branch of the Comhaltas Ceoltóirí Éireann (CCE Japan, http://comhaltas.jp)—a group dedicated to promoting Irish music, art and dance—will also have a booth on-site offering information on the arts and local classes.

Ireland’s own Gaelic football, a sport that’s gaining traction in Asia, is also represented. Differing from soccer, the sport is played with a round ball with 15 members per team. Goalposts are of the same shape as those of rugby, with what resemble soccer goals added. 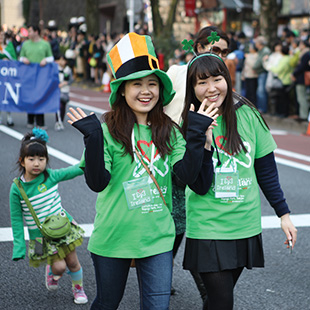 “The social aspect is key, with friendships and bonds built up though various events,” Dillon explains. “This not only applies to Japan GAA but to all Irish organizations within Japan.”

Business is also an important facet of cultural exchange. The Ireland Japan Chamber of Commerce (IJCC, www.ijcc.jp), established in 2008, works to fortify relations between the Irish and Japanese business communities through seminars and networking events; and also will be present at the Festival.

“Ireland can be an attractive location for Japanese companies to locate their European operations,” says Gerard Mulligan, IJCC president. “It has a highly-educated population that is one of the youngest in Europe, is English-speaking and an excellent doorway to the 500 million-strong European markets.

“Likewise, Japan is an attractive market for Irish companies looking to compete in overseas markets.”

To fully immerse yourself in the Emerald Isle, the I Love Ireland Festival might be the ticket.

The Story of Film: A New Generation

The industry is changing, as are audiences