Metropolis met with Erika Murphy and Natsuki Kato from the much talked about Japanese band Luby Sparks before their January 17 gig at Shibuya’s WWW. Vocalist Erika Murphy, who joined the band last year, and founder and vocalist/guitarist Natsuki Kato discuss shoegazing, bands, writing English lyrics and their love for all things British.

Metropolis: Why is the band called Luby Sparks?
Natsuki Kato: There’s a movie called Ruby Sparks. Our band hasn’t seen the movie but we all know the brief story of the movie and we liked the sound of the name Ruby Sparks. I thought it would be cool to name the band after the girl in the movie. I also thought that giving a random girls name to our band is a way to show our respect to the great bands back in the 80’s and 90’s. Many of our favorite shoegaze bands have songs named after girls name such as The House of Love’s “Christine” so it was based on that. And when we search Ruby Sparks online, a lot of the movie-related results showed up. So we decided to spell it Luby to stand out. And there’s no meaning to Luby in English which I also like. 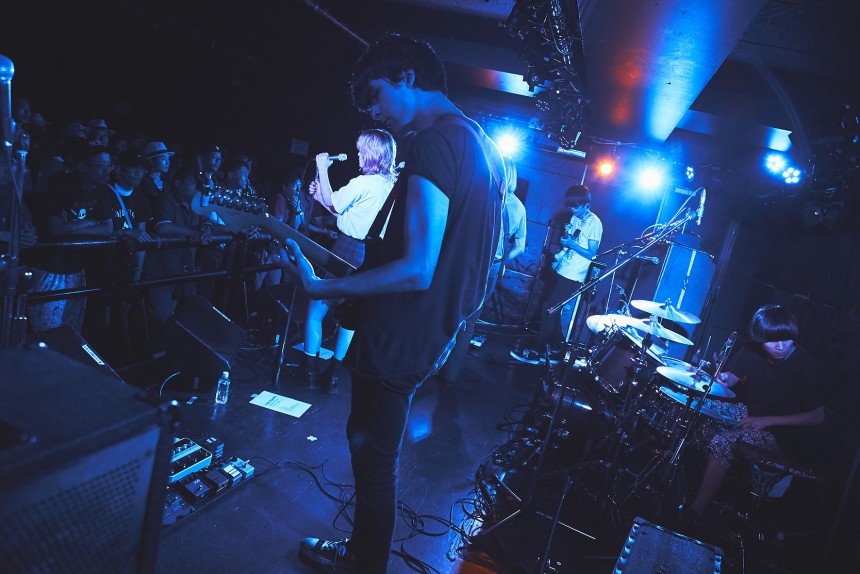 M: Erika, you’re quite new to the band. When did you start working with Luby Sparks?
Erika Murphy: Last March.

M: Was it strange taking over from another singer?
EM: Hmm, it was not strange to me at all actually. When I sing for the band I am the singer of the band rather than myself. I am acting. Also, I was a fan of Luby Sparks and I loved their songs. I’m happy with what I’m doing.

M: Erika has a similar background to former Luby Sparks vocalist Emily. Is it a coincidence? How did you meet Erika?
NK: We met through Instagram. We have mutual friends. I asked Erika to sing a couple of Luby Sparks songs for a demo and it was a perfect match. We were not specifically looking for another half Japanese and half British girl, but it ended up completely perfect.

M: Are you really classified as shoegaze?
NK: No. We never thought we were a shoegaze band. We’re possibly indie-pop. From our new EP we started to classify it more like dream pop. Maybe that’s the best word.

M: You guys are pretty young (Murphy is 19 and Kato is 22). How did you get into shoegaze and indie music?
NK: The influence is from my parents. My mother likes R’n’B and Sade but my father likes 80s New Wave, so there were a lot of New Wave CDs in my house so I’d like to pick them up. Also my father would recommend some old music.
EM: My mum was a big fan of punk so I was listening to The Ramones, The Sex Pistols and The Clash.
NK: The two of us were really influenced by our parents. The other guys in the band are different. They found music by themselves.

M: When I read about Luby Sparks I frequently find links with the UK. Why is that?
NK: Of course I like music from America but there are big differences between music from the US and the UK. When bands from both countries try to play the same genres there are many differences. Bands from the UK seem to be more melancholic, they have a feeling of sadness. That’s why I tried to make us sound more like a British band.
EM: My father is Scottish/Irish. I was born in London but unfortunately I haven’t been back.

M: You played in the UK last year. What was it like?
NK: Actually it was the year before. Yeah, it was great. We recorded our first album in London. Although we recorded our latest EP in Tokyo — we brought our producer over from London for it. For our next album we would like to go back to the UK or another country to record it. Possibly America as I was talking to our producer Max Bloom from the band Yuck. He recorded his first and third album in his house in London but he recorded his second album in New York with more professional production and said it was a very hard experiment but he found a new direction through that experience. Then I thought I’d like to try that too.

M: Who actually writes the lyrics?
NK: Me. I write them in English. It can be tough but I’ve been listening to only English music for a long time so my ear fits English songs. I’ve never thought about writing a song in Japanese. When I’m writing a song I try to find the best words that fit. My songs are almost all fiction but a little bit based on my life, or sadness in my life or things like that. 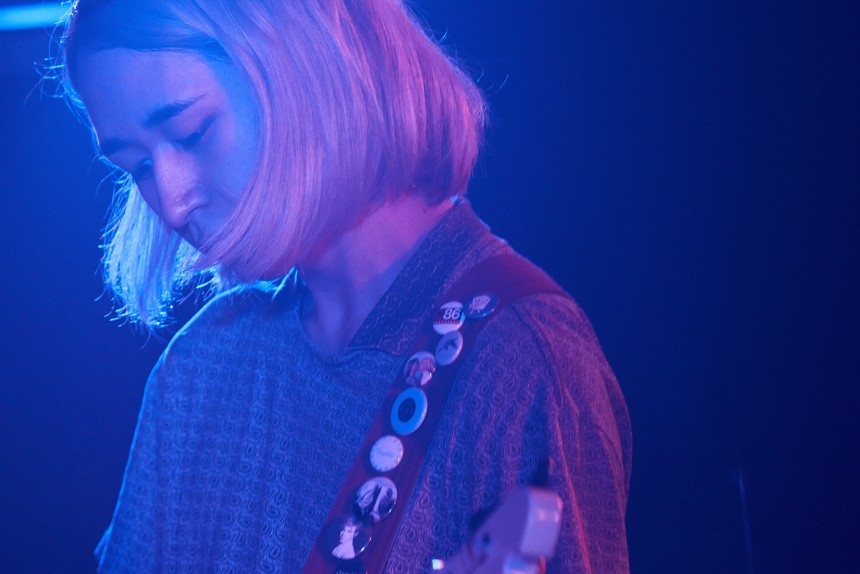 M: Erika, what’s it like to sing another person’s words?
EM: It’s not tough. I think his songs aren’t really fiction! I know about Natsuki’s life and loves! So I sing like I’m actually Natsuki.

M: At next week’s gig at Shibuya’s WWW you’re playing with Say Sue Me from Korea. How do you know them?
NK: I found them. I really like their album released last year and I was surprised it got a score of around 7 on Pitchfork. It was quite sensational to me that an Asian band got such a high score on Pitchfork. I thought I’d like to play with them. Our manager has a connection to the band so I emailed Say Sue Me and asked them to play with us.

M: If you could play with anyone who would it be?
NK: The Jesus and Mary Chain. They’re my favorite band.
EM: Probably My Bloody Valentine. We went to see their show in Tokyo in 2018. That made my love of the band even bigger.

M: It’s not usual for young Japanese to listen to shoegazing music. Most people are into other kinds of mainstream music. What do you think about that? What is the meaning of you guys playing maniac music in this age?
NK: We were always listening to music that no one else really understood. We were always those music freaks that every school has. We loved that feeling of being minorities. We loved ourselves listening to minor music. When our guitalist was at high school in Niigata, he used to spend a lot of time in CD shops by himself exploring new music and he travelled to Tokyo by himself just for the My Bloody Valentine show. We don’t have many friends, like other university students, but we know about music very well. Luby Sparks is a group of music nerds. We were just individuals who enjoyed the same music in many different cities, so I think we were meant to be together.

M: What do your friends think about Luby Sparks, Natsuki? Do they know you are playing music?
NK: Yes. One thing that makes me happy is when my friends get into great 90s bands such as The Cure through Luby Sparks. I think one of our aims is to be a gateway to great old music for young people. We are a shoegaze revival band for those who already know The Cure or Lush.

M: Erika, you have dyed red hair. Is it an homage to the Lush singer Miki Berenyi?
NK: Actually she dyed her hair red the day before the photo shoot. So it was by chance. I like making a scrapbook of band photos from the 80s and 90s so it fits – a bit like Lush’s image.
EM: I like films a lot. Like Run Rola Run. And I’m a big fan of Eternal Sunshine of a Spotless Mind so that’s why I changed my hair color to red.
NK: Actually Erika often changes her hair color like the character from Eternal Sunshine. Our song “Tangerine” is inspired by that movie. 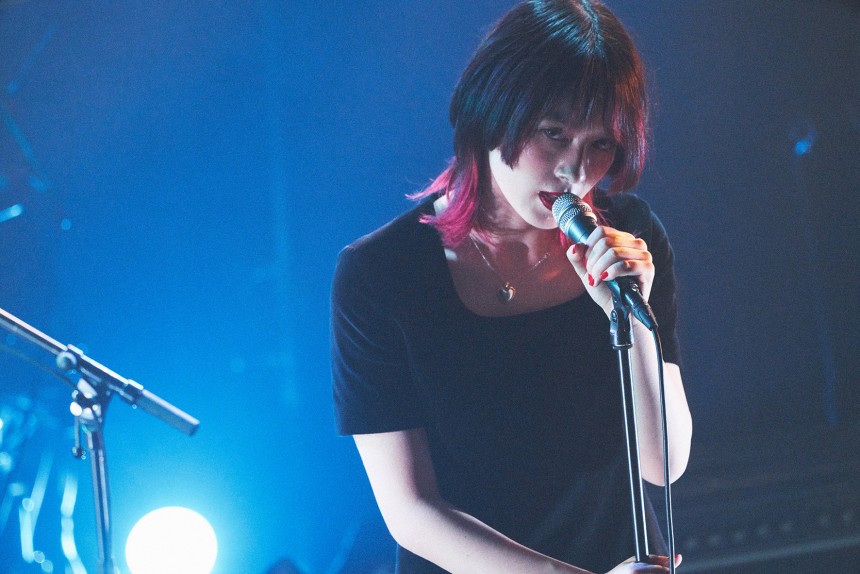 M: What’s your aim as a band? Do you want to be a huge name in the music world?
NK: Of course we want to be bigger. Honestly, we want to be huge around the world and not just in Japan because shoegaze isn’t actually so indie. In Japan, fans of shoegaze are very niche. But in the world My Bloody Valentine are huge and can headline festivals. It’s possible — so I won’t give up trying to be successful, but with this music and style. I don’t want to change our sound.

M: Erika, you also model as well as being in this band. You have several faces in many different roles. How do you feel about acting?
EM: My model career started when I was a kid. Acting is a part of my life already. My choice of what to wear depends on my mood. One day I feel like I’m a princess, or I wear a pair of jeans and T-shirt when I feel like a rock star. My style changes a lot everyday. I enjoy this change.
NK: The music you listen to depends on how you feel right?
EM: Yes. Whereas Natsuki has his own style, my style is influenced by music, movies and a lot of my favorite things. Everyday I look different but I believe this is who I am.

M: What should we expect from the new album?
NK: I’m writing new songs always. But our new EP just came out. So we are still not sure where we are going with the next album. When I made the latest EP I was listening to bands from 4AD. It has changed a little from the first album. So I’m trying to listen to both old and new music. I like the music 4AD released in the 80s and 90s. 4AD were focused on a specific sound like Cocteau Twins and Lush.

M: What is the best show you guys have ever played?
EM: The show at WWW in Shibuya. It was three months after I joined Luby Sparks. We had such a big audience and my face got screened onto the stage. It was so strange for me but I really enjoyed that show.

M: What was it like to play in the UK?
NK: We had two shows in the UK. One was at a festival called Indietracks, which is focused on neo-acoustic and indie pop music so I think we did it well. We also played at a small, old pub in London which was a community pub for those from the music industry. There were a lot of musicians at the pub that night. I think pub culture is cool in a sense that musicians come to pubs to hear new music and hangout.

M: What’s your favorite Luby Sparks song?
NK: Our EP came out soon after we released our first album so I like the EP better now. Although it changes every time I listen to our songs but I think I like “(I’m) Lost in Sadness” at the moment. And that’s the best song I’ve written so far.
EM: “Perfect.” It sounds like a happy song but the lyrics are quite sad. And I know the background to the song!