Stepping inside the alternative realities of an Instagram artist

Buzzing around the pink fluorescent lights beneath panels suspended from the ceiling, Mad Dog Jones feels like he’s part of the exhibition himself in his pink-tinted sunglasses. Known in the real world as Michah Dowback, fans of the Toronto-based artist are most familiar with his work as Instagram posts of illustrated urban scenes blending themselves somewhere between what looks like Tokyo and surreal alternative worlds, or portraits of people we can’t quite place who, where, or even if they are. In the physical space of the Diesel Art Gallery in Shibuya, the Instagram creations take a weird step away from their online realm into the very city that they distort, interacting with the space, objects and light of the real world for the first time.

Mad Dog Jones’ positive enthusiasm is infectious as he leads Metropolis on a tour around the gallery, inviting us to engage and play inside what feels like a physical embodiment of his Instagram page, or a wormhole in space.

Metropolis: This is your first ever exhibition. Can you introduce us to it?

Mad Dog Jones: The idea behind it all was timelines. It’s things that have happened outside your existence. And it’s not just on a straight timeline, but also on different planes and parallel realities. If something else had happened in your life, what cascade of other things would have happened? What would that world look like?

“Best Friends Forever” [above] is thinking what would the world look like if humans just randomly went extinct one day? It’s not meant to be an apocalyptic piece about humans self-destructing, it’s just different realities. What if this world was different and… dogs were the kings… or whatever.

I do a lot of overlaid figures. It’s somebody who’s there or was there or could be there, kind of like an imprint. The location is the only static thing but who’s there is different. That ties in with why the hanging panels are here in the gallery, so that you can overlay the art over the top of itself and also see yourself overlaid, walking around and finding different combinations. It’s like a live remix about the pieces and you.

The buildings in my work are parts of worlds that don’t really exist. It’s worlds that don’t make sense. It’s on another reality where things are different. Untethering yourself from the moment you’re in and making up all the different realities. It’s all kind of airy and spacey too but I’m kind of like that.

M: Your art does feel airy and spacey but simultaneously feels grounded in a reality we can understand and we’re still very familiar with.

M: The “slice of the world” you focus on in your art looks highly influenced by urban areas in Japan, especially Tokyo. Why this part of the world?

MDJ: I really like nature. I grew up in Thunder Bay [Canada] in this cool hippy house with 70 acres of old-growth forest and looking at trees and sunset and sunlight. We even had a beaver dam and bears and moose. So I love all that. But one thing that I really like about Tokyo as a city — or even about Japanese people — is this intentionality. It feels like stuff is built in a way that’s so thoughtful. Even in the way people pile their garbage there’s an intentionality. It’s like people are thinking: “Well, it’d look a little bit nicer if I just organized it a little bit this way,” instead of just throwing it into the streets like we’d probably do in Canada or the U.S.

Whether people know they’re doing it or not, I think proper intentionality mimics nature in a lot of ways. A really well-constructed stairwell kind of mimics a river cutting through rocks. I think in Japan, in order to keep people happy and not depressed, buildings and cities have a flow and — whether it’s intentional or not — it reflects these natural elements that are pleasing to us. In an intentional society you can create those nice feelings in microcosms on different levels. That’s where a big part of the draw for me to use it in my art comes from.

And then there’s that other layer of just growing up loving anime and that kind of culture which was really cool to me as a kid. From a compositional level though, I like to invite people to participate in that kind of [intentional] world. 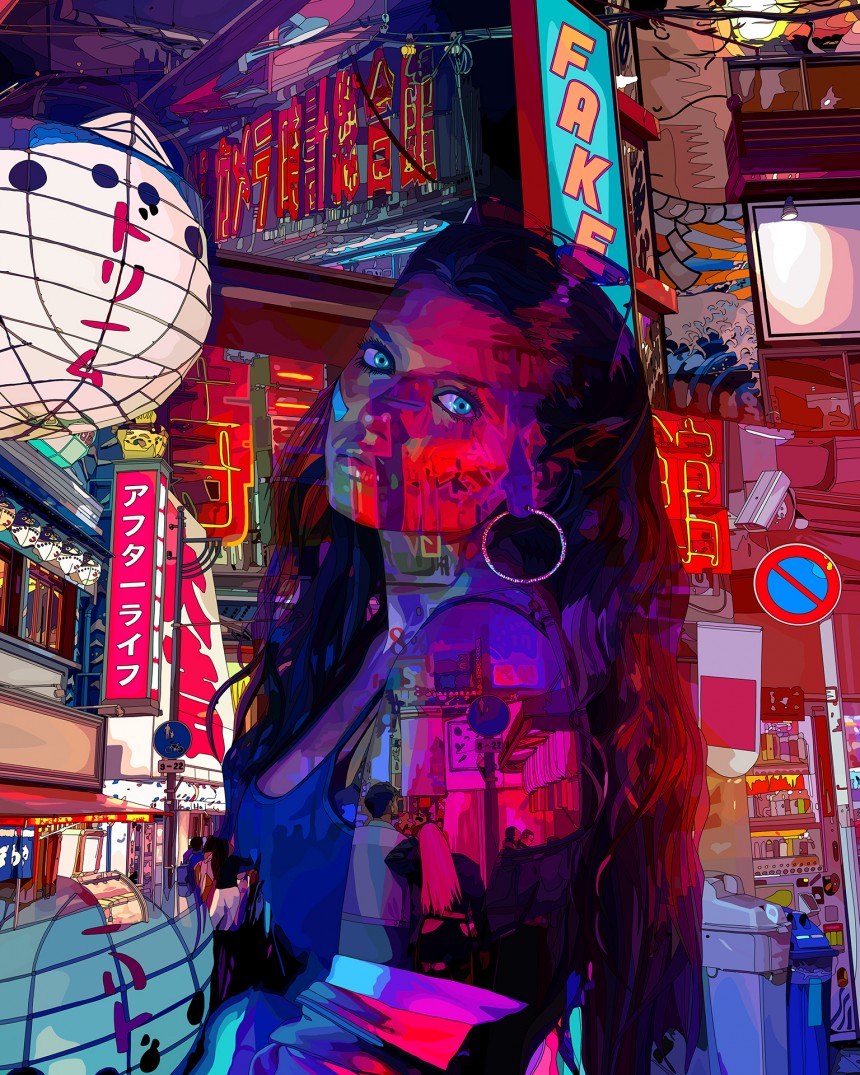 M: How do you balance between the reality in your initial photography and the ethereal and surreal you add into your work?

MDJ: Some of my work is more collage and some is more illustration. I bend all the colors to make it all locked in. A lot could be photo collages but sometimes I blow up a building that’s a really small part of the original photo and it’d look pixelated and weird, so I illustrate it a little bit at the end to pull it all together. By doing this it becomes one immersive world and doesn’t take you out of the reality I want to create.

M: Your work became popular through your Instagram, and this gallery exhibition is the first time you’ve been able to display your work in a physical space. How has the artistic experience been moving from online to the physical?

MDJ: Yes, it’s crazy. I’m so grateful to everyone who helped out. I had a lot of these concepts and ideas ready to go but the execution is different so my dad, who’s actually an artist, helped me out loads.

I really wanted the exhibition to be something to interact with and take pictures for their Instagram. There’s lots of different places and angles you can take cool pictures of yourself through the panels and in reflections and even wearing the helmet and the vest. It’s more fun for people to play with them and risk them being broken.

We’re also doing a competition where you can put pictures of you wearing them on Instagram and I’ll pick my three favorite pictures then do an illustration of those people. That’s part of the theme, interaction.

I originally had the helmet just by itself and I was like: “What else can I do with this?” I was in my kitchen, just put it on my stove and threw all this crap on it, took a picture and then added all the extras like garlic, avocados, onions, mushrooms, ginger and illustrated manta rays. A lot of my stuff is cyberpunk-y or architectural, but I like the idea of “What if a piece had flavor?” It’s a weird idea and maybe silly but… 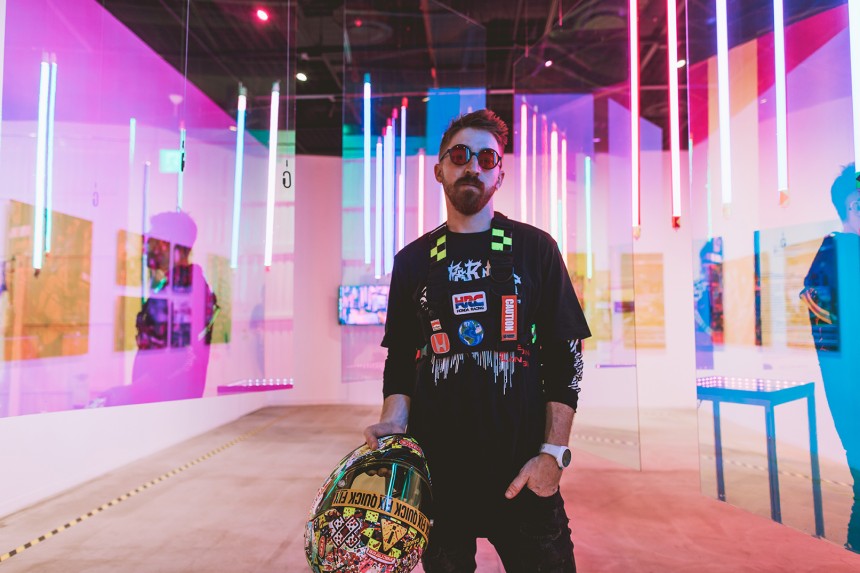 M: Your approach to your work feels so playful.

MDJ: I like to be silly and fun in my art and it’s not all about existential moments. You can find a moment where it’s just a personal thing you think about. I don’t always have a lot to say about each piece as an artist but I like to be goofy and silly too — one piece is just inside jokes built upon inside jokes with memos to myself and scribbles and doodles.

M: Now that you’re actually in Tokyo does it feel like how you portrayed through your digital art?

MDJ: I’m always thinking is this picture too saturated? Am I blowing out these colors too much or adding too many crazy layers of buildings? But that’s how Tokyo feels. I try to make art that looks how it emotionally feels. The picture doesn’t do it justice, you have to actually be there. For that sky [points to a piece], a normal picture of that moment is just a nice picture, but creating that nice sky gives a weird feeling of mysticalness. That’s how it really felt in that moment so that’s what I want to show.

“Me in the AFTERL-IFE WORLD Challenge”
August 30 — October 15
3 winning photos will be chosen by Mad Dog Jones
Winners will be announced early November @mad.dog.jones Instagram and on www.diesel.co.jp/art/mad_dog_jones

-Inside the Diesel Art Gallery take a photo of you wearing or posing with the motorcycle helmet and vest.
-Upload to your Instagram and follow @mad.dog.jones
-Add the tags #afterlifeworld and #dieselartgallery

Please check the gallery for the rules and more information.