“My identity was always floating and never found a place to land. I was always seen as either Asian or someone who has a French background, which people somehow think is a cool thing to be,” explains singer-songwriter and sound producer Maika Loubté. The 29-year-old had some pretty hectic teenage years, living in several countries including France, Hong Kong and Japan. “I always wonder what would be left in us without modern society’s labels. Job titles or nationality blur who we really are,” she continues in an exclusive interview with Metropolis. “I believe we are all vulnerable but equal and would be able to do anything without these labels. I wanted to capture the fundamental aspects of humans in my second album, Closer.”

When asked what music meant to her in an earlier interview for “My Quarantine Albums,” Loubté shared that, “Music is like a parallel world that never gets disturbed by what’s going on in this real one we live in.” Growing up, instead of a big fluffy teddy bear to comfort her like most kids, music was by her side and a constant in her life when she had to say goodbye to best friends or struggled with language barriers each time she moved because of her father’s job. “I guess my life would have been even harder without music,” Loubté recalls. 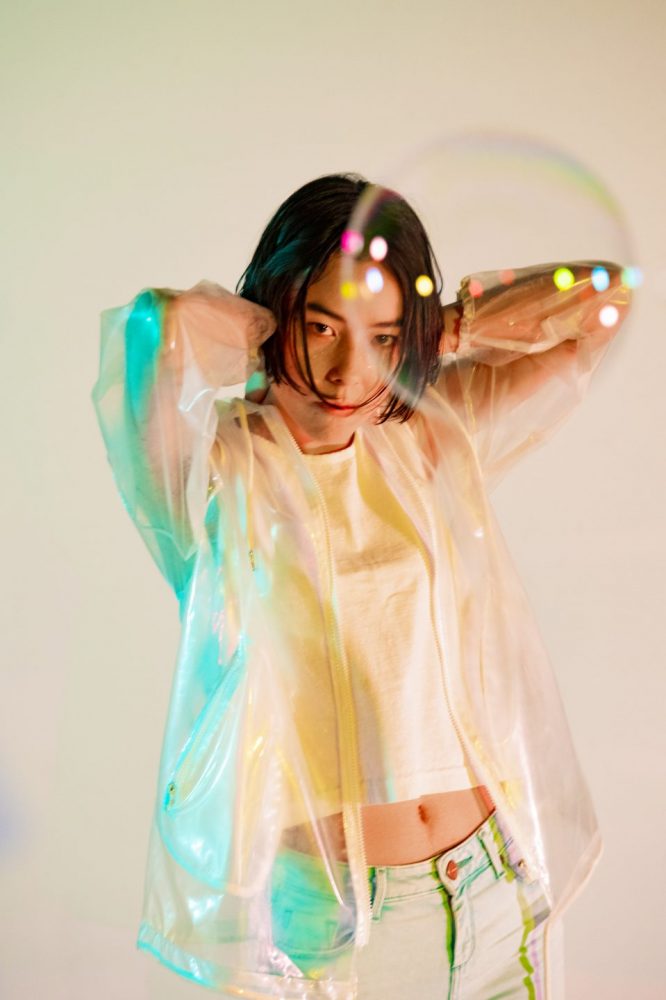 Photo by by Taku Urata

Having released two albums, Le Zip and Closer, Loubté is steadily building a name for herself as an electronic sound producer while juggling side projects, such as contributing songs to the renowned anime series “CAROLE & TUESDAY.” The artist also collaborated with Japanese punk band TENDOUJI on “Don’t be shy” from its 2017 album, MAD CITY. Loubté’s chorus in “Don’t be shy” is a perfect embodiment of dreamy indie rock, echoing the likes of New York City pop outfit The Pains of Being Pure at Heart.

Following her Spain tour last year, Loubté returned to the European scene for the online Spanish music festival Cuarentena Fest, joining from her Tokyo studio during the COVID-19 pandemic. She has also been actively raising her voice when it comes to global social issues, such as the Black Lives Matter (BLM) movement, by starting a fundraiser on Bandcamp.

Metropolis: How have you been spending your time recently?

Maika Loubté: My life as an artist hasn’t changed a lot as I’m not in a band. I can perform from home by myself. I like spending time at home anyway but I do miss performing in actual venues.

M: What do you miss about that?

ML: Before the pandemic, I thought the role of artists was to perform for the audience and the audience’s job was to receive that music at shows, but I realize now how much I received from them [the audience]. Raw interactions, like seeing their reactions to my music, their joy and dancing are all key elements of my shows. However, there’s little audience feedback I can get while performing online. Singing at the camera lens doesn’t feel real. I don’t know who is actually behind the screen so I have to imagine who I’m performing for. Online live streaming seems like a futuristic way to perform no matter where we are, but normal analog shows have so much going on in one physical space. 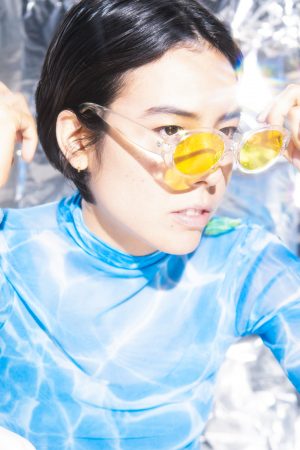 Photo by by Taku Urata

M: You talked a lot about the Black Lives Matter movement on social media. However, it’s still seen by some as taboo for artists to talk about politics in Japan. What made you raise your voice for this?

ML: I love Black culture. It didn’t feel like it was someone else’s business when I saw my friends’ posts about what initially happened in Minneapolis. Like Naomi Osaka said, I believe anyone can talk about politics.

I have lived in France for eight years and there were times I felt neglected as an Asian person. However, I never felt that way when I was with my father, who’s a white male. I think I do have white privilege but also have experience of being discriminated against as a minority. So discrimination and racism have always been present for me and I think there is more I can talk about this issue compared to other people in Japan, for example those who have Japanese parents and only Japanese friends, all only consuming Japanese culture.

M: You recently posted a live piano version of “Niet Ⅱ” on Bandcamp to help raise funds for organizations like Color of Change that support the BLM movement. How did this project come about?

ML: To be honest, I didn’t know what to do when I heard about this [BLM]. I chose not to post a black image for Blackout Tuesday because I thought I should find out what the issue really is about first and it shouldn’t be that easy to participate in such a huge issue. I learned about systemic racism and was thinking what I can do about it. I was recording the piano version of “Niet Ⅱ” for a radio program due that week when the movement started growing globally. It felt like this [the Bandcamp fundraiser] could be the most effective way for me to be involved with BLM. “Prisme,” one of my songs from Closer, was actually made out of a similar theme with systemic racism. The music video filmed an Indian immigrant, who is an ex-military soldier, selling flowers at the station in Paris every day to send money to his family back in India. I wanted this video to be about the fundamental parts of human beings and I tried to reach out to this by focusing on people in socially vulnerable groups of society. I was quite lucky to meet him as my staff and I only had three days in Paris for the shoot. I had no idea what was going to happen but we couldn’t make this video without him.

The world is divided and now we have to live some distance away from each other, but I realized that everyone has their own life and beautiful things exist equally to everyone.

M: What was your first memory with music?

ML: I remember when I was five, I started learning piano at a school near my house, which is a very typical story, and I was playing classical music until middle school. One day, I was asked to write a pop song for one of my classmates, who is really good at singing. I was also into pop artists like The Beatles and the Japanese rock band Spitz. I had to change schools a lot because of my family, which is probably why I didn’t start a band, but piano was like one of my best friends. Things were always changing around me but my relationship with piano never changed. When I was having a hard time blending in at a new school in France, I went to the piano room before music class started and everyone was surprised at me playing the piano, saying, you’re such a great pianist! [Laughs].

M: What is the theme for “Ride My Bike?”

ML: I started working on this song at the beginning of this year. As the situation was rapidly changing, clubs and music festivals were taken away from our lives and it feels like such a long time ago since we used to come together to dance to music. I love cycling anyway but it felt so free cycling near my house and it became more than just riding a bike during the state of emergency in Japan. I felt passionate about cycling the way I used to feel towards music. I needed something to keep my passion going in my daily life to look forward to the future, when we can all go out to dance to music again.

In terms of the sound, I intended this song to reinterpret 90s trance music into a pop song for 2020. I thought it would be interesting to see if 90s trance could fit as a vintage sound in my song and work on it from there. 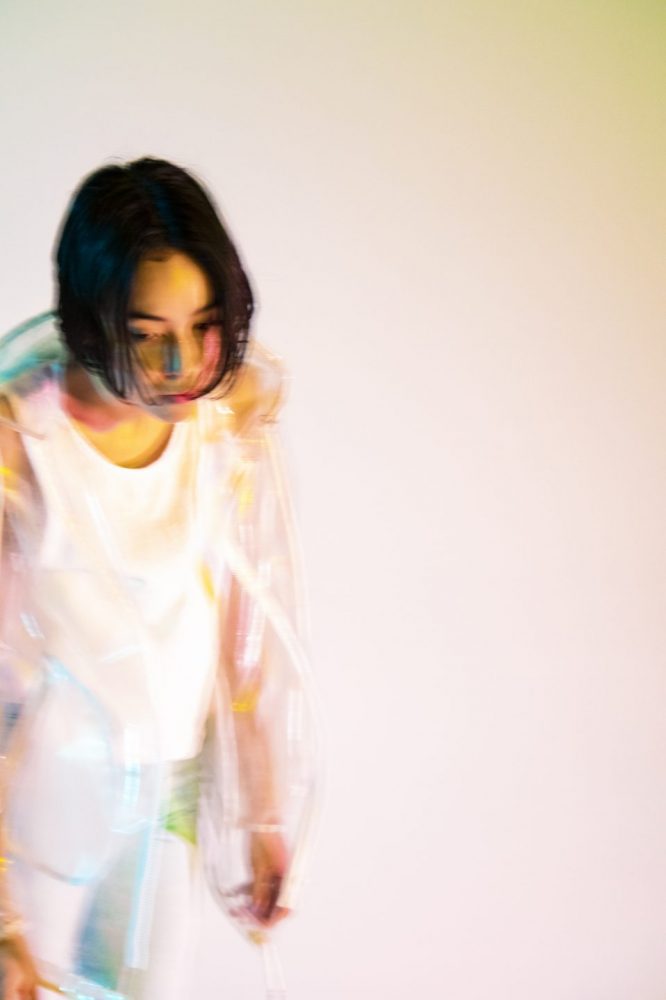 M: Could you tell us about the photo project for “Ride My Bike”?

ML: Ahead of the release of “Ride My Bike,” I asked my fans to send photos of their daily life.

More than 1,300 photos were sent to me for this project and all of them moved me; I felt so emotional. Fireworks, sunsets, their pets and so many other things were in their photos. It was very interesting to see how so many people sent me similar things as representations of their lives, but their photos’ textures and styles were so different from one another. The world is divided and now we have to live some distance away from each other, but I realized that everyone has their own life and beautiful things exist equally to everyone. This project gave me a chance to get a brief look into people’s lives while keeping socially distanced, which was also interesting.

M: As a solo artist who can understand different languages, you’re quite free in terms of where you can live and work, and the COVID-19 pandemic proved to us even more that many of us don’t necessarily have to stay in a certain place for our work. Do you think Japan is still the right place for you to live in the future?

ML: I have a few places I’d like to visit for a month or two, like Melbourne or Berlin but I don’t think it’s about where I am but who I am that matters. Every country has its own positives and negatives. I live in Tokyo now and I love how my neighborhood has lots of nature. What matters most to me is to care about people around me and live every day giving it my all so I can reach my goals.

All photos by Taku Urata