Not Somebody Else’s Problem

‘Hanasou’ urges people to talk about BLM in Japan

Read this interview in Japanese.

An estimated 3,500 people gathered in Yoyogi Park on Sunday to stand with the now global Black Lives Matter movement. Tokyo’s most recent peace march echoes protests in Osaka, Washington D.C., Paris and hundreds of other cities, whose cries against injustice have sparked conversations about race and oppression not just in the U.S., but in places where these issues remain less visible and even overlooked.

In Japan, where racism is often perceived as a Western phenomenon, organizers and activists are working to educate the public about human rights, reeling the names of George Floyd, Breonna Taylor and countless other victims of police violence into the national conversation. Eighteen-year-old Rino Fujimoto, a recent high school graduate who currently lives in Houston, Texas, is one of the voices leading this conversation in Japan. Her bilingual social media platforms (Twitter and Instagram) strive to inform people about the current situation in America by translating crucial information and sharing resources like donation projects and petitions in Japanese. A recent post features a captioned speech by “artivist” Malcom London at a Chicago protest in early June. 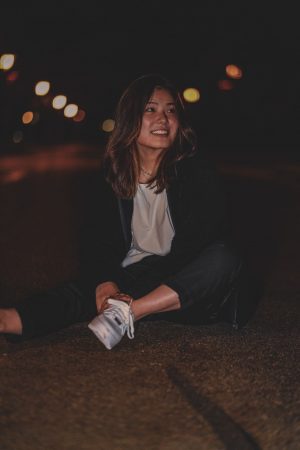 Rino Fujimoto, the creator of hanasou.jp.

Fujimoto, who is bilingual in Japanese and English and grew up in the States, runs the accounts mostly on her own with the help of several volunteers. After a gap year, during which she plans to expand her efforts on the accounts, Fujimoto will begin her studies at University of Michigan, where she will major in public health with the ultimate goal of going to medical school. Metropolis spoke with the Houstonian about her social justice platform and why people in Japan should stand with the movement.

Metropolis: Social media has played a major role in the Black Lives Matter movement by informing people about the situation worldwide. What inspired you to create these accounts?

Rino Fujimoto: When I saw all the posts and all the protests going on around my life [in Houston], I was wondering if there was anything for me to do. When I searched up about this movement in Japanese on the news and social media, nothing much really came up. Also, when I saw that a lot of the news media were reporting false information, I thought they didn’t do a good job of portraying this movement in general so I decided to use my bilingual skills and make that come into use.

M: I’m sure you saw the NHK program, whose portrayal of racist stereotypes angered a lot of people earlier this month. Your content targets a Japanese audience, in particular those who live in Japan. Why is it important for people in Japan to care about what’s going on in the U.S. right now?

RF: I think a lot of Japanese people, their initial reaction to this whole movement was, “Why should I care? I live in Japan and it’s not going to affect me in any way.” … My initial reaction to that was: Why do you think this is taningoto (somebody else’s problem)? I guess I understand where they’re coming from but I realized that it’s so important to make people realize that this is not about them, this problem extends outside America; it is a global human rights issue. This is about Black people and Black people solely in America, and not even [only] in America, because a lot of Black people around the world are discriminated against and I don’t think that’s something that people realize really until they start researching about it and reading about it.

M: I think a lot of people fall into the trap of thinking that the problem doesn’t exist here in Japan. That mentality of racism and injustice being America’s problem. What would you say to somebody who thinks that?

RF: I would start off by talking to Black people around you and listening to Black experiences in Japan. Right now, every post that I make is basically devoted to Black Lives Matter. However, I want to grow this into something greater, maybe like a conversation starter. I think this would be a very good time to start talking about Black lives and expand that into: What is discrimination in Japan? Or what is discrimination against minorities all over the world?

M: Translation is a big part of the work you’re doing. I imagine it’s hard to explain concepts like police brutality and have those words hold the same weight as they do in America. What are some things that you keep in mind or pay particular attention to when you’re translating these issues?

RF: First, I was conflicted on how to translate “Black Lives Matter” because I didn’t want to exclude [anyone] and I didn’t want it to hold a different meaning. So what I did was, I just put it in katakana and hoped that people would understand. I explained it a little bit in a different post. When translating, I make sure to respect the direct translation but also add in extra explanations to help readers put the information in context. Before publishing, I make sure to read over the volunteer translators’ interpretations and add my input as well.

M: You’re in Houston right now, where thousands of people gathered for George Floyd’s funeral service this month. Can you talk a little bit about what you’ve seen going on in your hometown? Have you been to any protests?

RF: A lot of my friends have been attending protests and unfortunately, my dad works at a hospital and I don’t want to increase the risk of coronavirus, so I haven’t been going to the protests. But I’ve been trying to keep updated about the whole situation about the protests going on around me, as well as about the general movement as a whole. I think one reason why it became such a big thing in Houston was because George Floyd himself was from Houston. So it’s been very dear in our hearts and he was a Houstonian so it definitely impacts our perception of Black Lives Matter here.

M: Over 1,000 people gathered in Osaka two weeks ago, and there have been peaceful marches for Black Lives Matter in Tokyo and other cities as well. How do you feel seeing these protests happening here in Japan?

RF: I came in contact with Brianna. She’s one of the main organizers of the Kansai protests, and I asked her a couple of questions and I posted about [the Osaka protest] as well. I’m planning on posting more. I’m so happy that people in Japan are protesting for Black Lives Matter because it’s definitely something that other countries are doing as well. I’m so glad that this has grown into an international, global movement and I hope it stays that way. I also hope people will understand that every individual holds their own responsibility when attending demonstrations; we all have to play our part in staying safe and preventing coronavirus from spreading further.

M: In addition to educating ourselves and those around us, what else can people here do to stand with the movement and show support?

RF: Even though I urge people to join protests, even in Japan, I think there are still a lot of things that people can do without protesting or directly participating in these protests. That’s definitely something we can all do better at. The first thing I would recommend is sharing on social media, because I don’t think a lot of us realize the power that our voice holds. Especially on social media, it’s so easy nowadays to post information, spread awareness and bring awareness to things. The second thing I would definitely say is donate if you can, because money talks. It’s definitely something I want more of my followers doing and I’ve actually received receipts from people who have donated and I’m so thankful that even in Japan, people are donating to a cause in America. The third thing I would say is signing petitions, because you can sign petitions even if you’re in Japan. Send letters to representatives, state representatives, police officers, police departments. I have a couple of posts covering that also. There are many things you can do, even from Japan. I hope many people will reference my account’s posts and use their voice to change the world we live in today.

Patrick Smith aka ‘thepaperpat’ opens up about his experiences

At the Forefront: Conversations with a Black Trans Activist

Under it, this will get