Daisuke Obana is 45, assured, calm and a fashion designer at the top of his game. He’s been at the helm of top menswear brand N. Hoolywood (a deliberate quirky misspelling) for about 20 years and has acolytes and a legion of fans the world over. Sitting in his brand’s press room, in Harajuku, you wouldn’t know from talking to him that he has a superstar status in the fashion world. Humble, funny and engaged, he looks at home in a room full of his creations while casually wearing an illuminous yellow ribbed sweater and vintage Yohji Yamamoto trousers.

He has made a name for himself, after a successful career as a vintage clothes buyer, crafting a series of collections which reflected his absolute obsession with America and Americana. N. Hoolywood has become a social and cultural mirror of America — the brainchild of a Japanese man from Kanagawa Prefecture who, over a decade, travelled to 45 states and used what he witnessed on the road to design clothing which showcased the diversity and melting pot of the United States. The Amish community in the rural midwest, cult indie film American Splendor, Howard Roark — the protagonist of Ayn Rand’s seminal novel “The Fountainhead,” the movement against the Vietnam War and his travels in the state of Arizona have all appeared as themes in his collections. 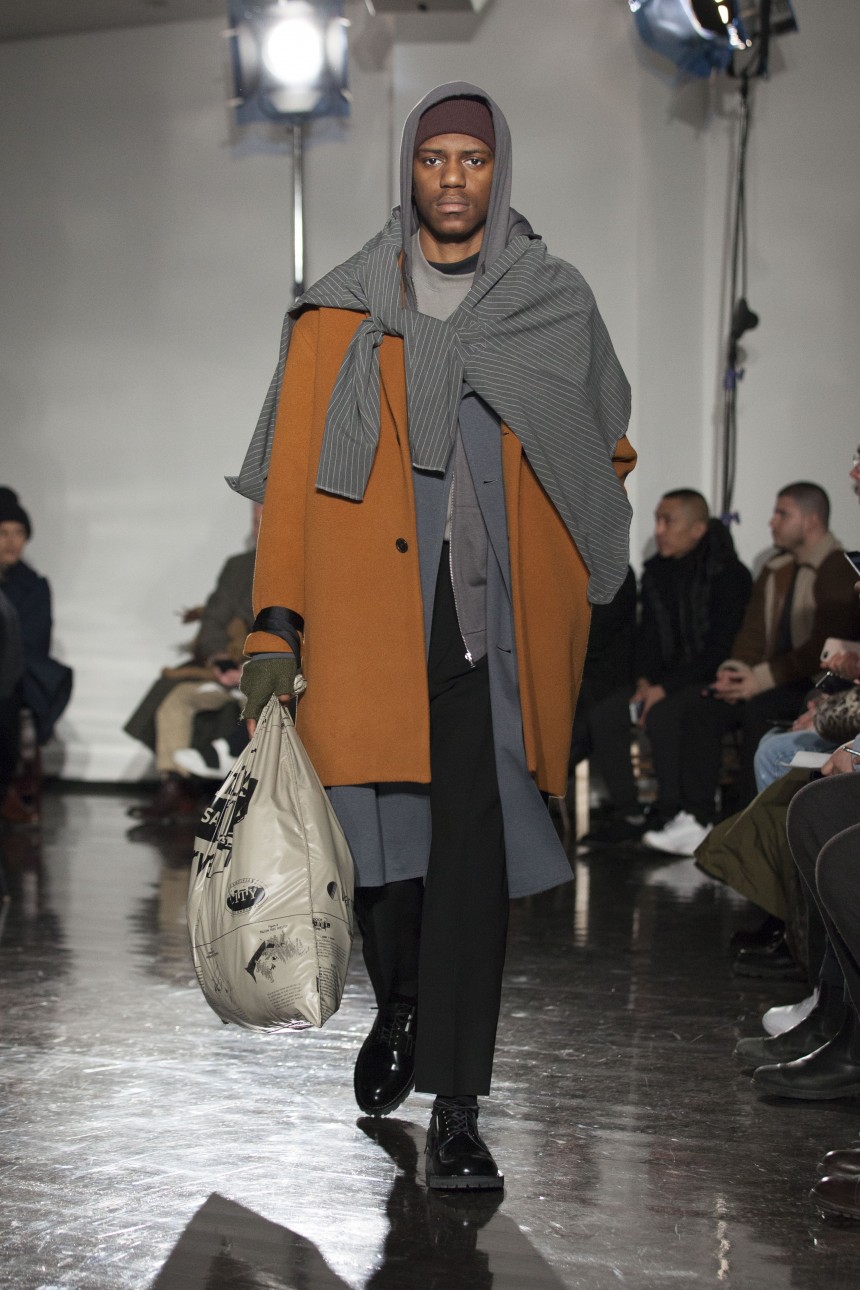 Obana, after showing his theatrical smorgasbord of Americana in Tokyo, made the leap to New York Fashion Week in 2010 and, in the process, became a staple of the fashion industry there. Tokyo and its insular and somewhat parochial fashion industry seemed a little too small for his vision and a move to New York seemed, ultimately, like an obvious choice.

“It was a gut feeling,” says Obana. “I have a real passion for the US so it felt like the right time to go there. It was an impulsive decision. For about ten years I’d been successful in Tokyo and I recognized the impact of social media and I could see the amount of different fashion coming through so it became a huge momentum to push me towards the States.

“It wasn’t just magazines covering fashion but social media too and different avenues channeling into the fashion industry. So I felt I needed to challenge myself. I realized that it didn’t really matter where I was based because of digital media and my biggest passion was to get my message across to my audience.”

N. Hoolywood, which has its Japanese flagship in the backstreets of Omotesando, is a real story of one man’s vision and ambition. An America otaku (obsessive), he’s made an unexpected and unplanned career out of his love of a country he currently visits only four weeks a year. When asked if he still has an obsession with the States he replies, “I’ve been interested in the US since I was 18. Two years ago, however, I realized that I‘d already been to most places there. I’m 45 now and I’ve made most of my life living off this obsession that I find I can now slowly detach myself from it. So I started to explore other avenues. Although even if I detach myself from the US, it’s such a huge melting pot, it’s so diverse that even if I don’t go there some of the culture, from region to region, might bleed into my work. The US will always be a part of me.” 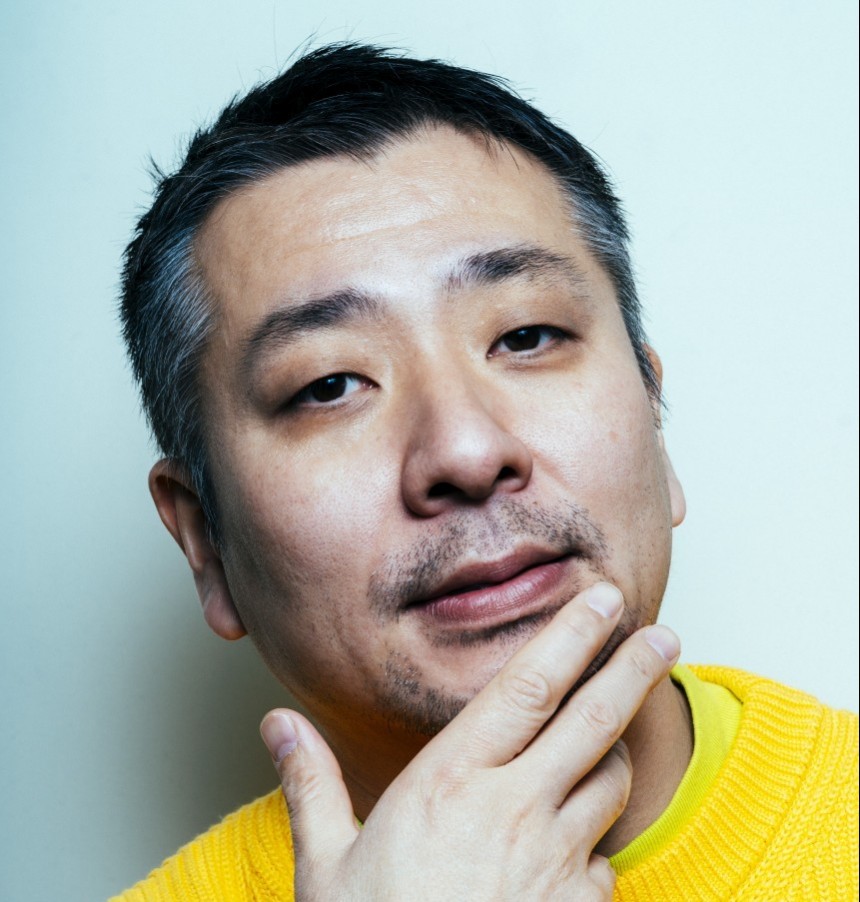 Recently Obana has been traveling in Europe which might be an indication of a change of direction and themes to come for the brand. The amiable Kanagawa native, who generally eschews the limelight, got himself into some pretty heavy-duty controversy when his A/W 17 collection “Gutter Punk” used homelessness in America as a starting point. Causing an online shitstorm among the Instagram and blogging community, Obana found himself the center of attention for all the wrong reasons. The N. Hoolywood designer recalls:

“It was a tough time for me. America is known for its freedom of expression so I thought I was free to express my understanding of the issue. Of course homelessness is a problem but I found beauty within it. So I thought it as a good idea to go forward with that collection.

I realized that many people in the media industry, from mass media to amateur bloggers, were in the business of floating gossip and trying to create controversy. The root of the problem was that these gossip bloggers want to feed off the controversy and latched on to this homeless collection and spread it all over the internet to gain more followers. They made it into a bigger issue than it actually was.”

The collection, which Vogue writer Lee Carter wrote was “Obana’s most compelling yet,” turned fashion into a genuine discussion point and one which is lost to most fashion sceptics. Fashion is essentially a reflection of the times in which we live. We can link fashion to eras such as hippie style with the 60s counterculture movement, punk with the 70s, the New Romantics with the 80s, British lad culture with the 90s and so on. What designers, such as Kim Jones at Dior, Nicolas Ghesquière at Louis Vuitton and Rei Kawakubo at Comme des Garçons, create (in terms of looks, shape, material and color) bleeds down into everyday main street stores, often seasons later, which the everyday person then buys. You might not like it but it’s just a fact of life. Someone has to lead and create clothing and fashion and what we wear from day to day. 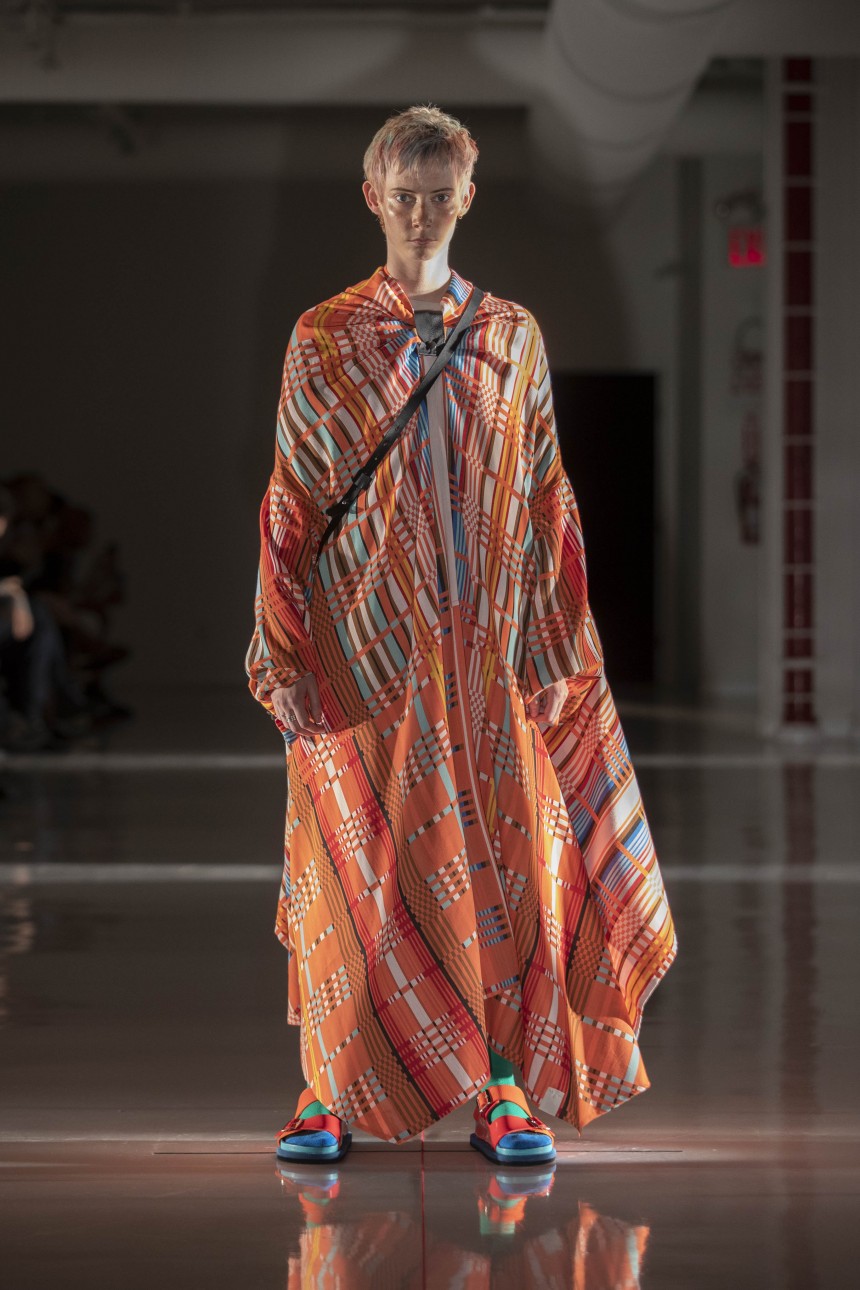 “My PR company suggested I give a public statement regarding the collection however I personally believe I did nothing wrong,” says Obana regarding the homeless issue. “So I didn’t want to admit to anything because it goes against my values. I’d rather believe in my own values and ultimately decided not to give a statement. And it worked out.”

The current menswear climate resembles a very stylish carousel — with designers changing positions more than usual. In the last few years Kim Jones has moved from Louis Vuitton to Dior, Raf Simons from Dior to Calvin Klein and subsequently to his own eponymous brand and  Hedi Slimane from YSL to Celine. After years of designing for global buyers and customers Obana’s name must have been mentioned, by those in power, when discussing taking the reigns at an established house. When we discuss the case of Raf Simons, Obana replies:

“Years ago I would have been really interested if a brand such as Calvin Klein offered me a position. The reason being because, back then, Calvin Klein was iconic and the jeans were great. Such an inspirational and iconic brand.

“I think this trend of designers switching brands will continue. Especially in the digital media age. There used to be the age of iconic designers for one brand — Lagerfeld for example but it’s turning into the rotational age. Brands used have iconic designers attached to them, like Chanel or Dior, but that’s starting to change into a trend in which you don’t always know who is designing the brand anymore. They don’t want to be held down by one person and it looks like they want fresh blood and new ideas.”

Obana is a designer who embraces diversity and global culture, a man who proudly admits being an otaku. He’s a self-proclaimed onsen (hot spring) obsessive who’s visited over 2,500 locations — follow him on Instagram for the full story. It’s intriguing, then, that he has incorporated a design team into his brand and philosophy. He no longer is in control of every aspect of his designs and label. His design team, carefully chosen and selected, assist him and have become a catalyst for Obana to move from designer to more of a director and overseer in terms of roles. 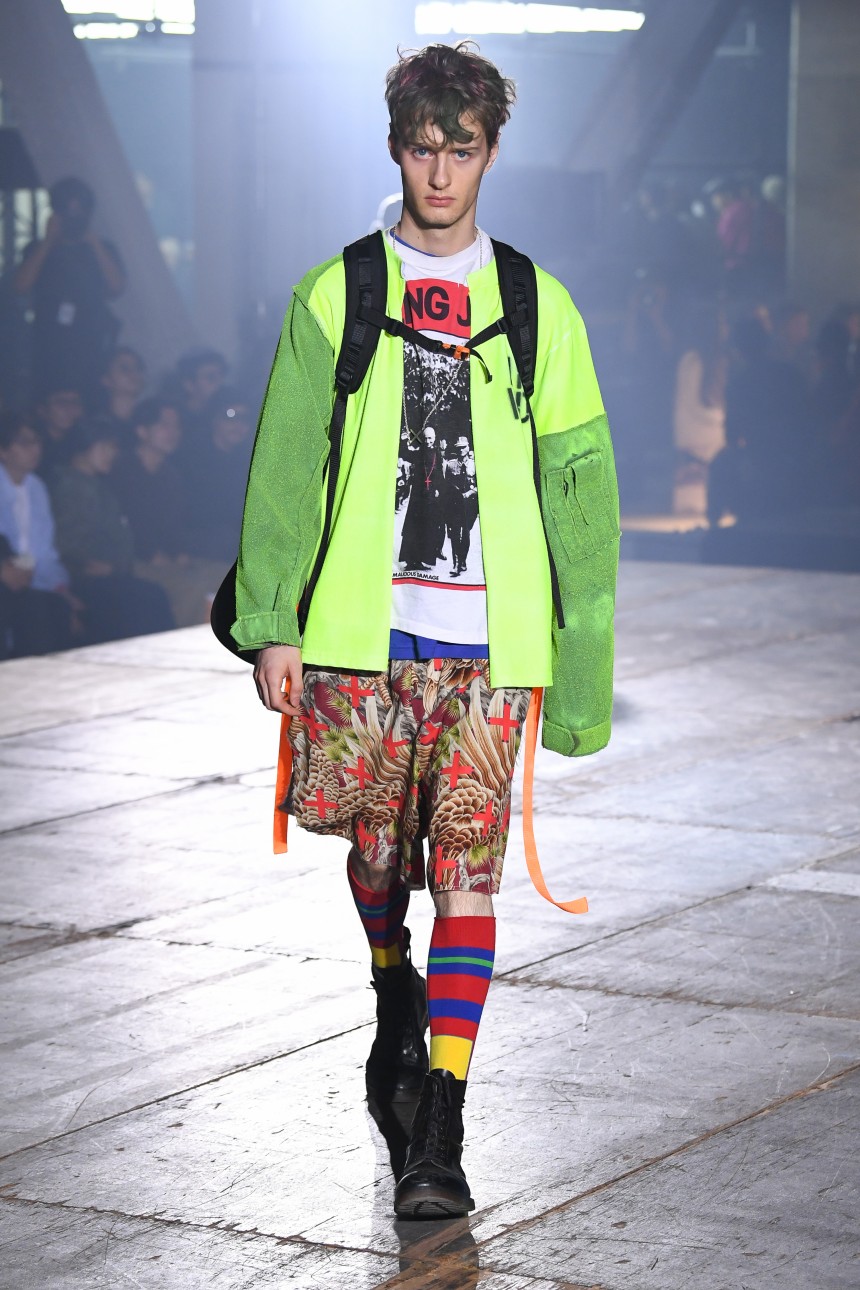 “20 years ago I’d make all the designs and a chart breaking down, for example, what kind of thread and buttons to use. But this was 20 years ago. However, now that I create so many lines and collections I’m more like a director in the sense that I have a team of people who are able to understand my vision, identity and thoughts. There are so many things I want to do that I find it easier to give my ideas to my team and they help build up the image.

“10 years ago I met Karl Lagerfeld and he’s been a huge customer of N. Hoolywood and has always been supportive. One time I was invited to Fendi’s showroom in Rome. When I went there I was inspired because unlike my designs, which were structured and detailed, his were more fluid, created by a soft pen and I could see how he put his emotions into his designs. It’s a lot more passionate and free flowing. So I decided to use broader and more expressive and abstract designs and give these sketches to my team and they were able to work with them and fill out the ideas. And it helped speed up the process too.”

Obana doesn’t use names or concrete themes for his shows as much these days. Long gone are the days of collections named “Skyscraper” and, instead, the more orthodox use of S/S and F/W. He has embraced a more Japanese manner when it it comes to lighting his catwalk shows in New York and likes to believe that his audiences can use their own imagination when it comes to his collections. N. Hoolywood, the brand he has nurtured and developed over two decades has, rightfully, developed into a major fashion player — a brand which reflects the world in which we inhabit and the wonderfully diverse communities in which we embrace.