Wonders await you in Chiba

Tokyo is known for its hustle and bustle, but the area surrounding the metropolis is surprisingly tranquil and filled with adventure. Of the four prefectures that border Tokyo, perhaps none is more accommodating than Chiba.

In fact, many seasoned travelers and long-term residents would agree that the prefecture is one of nature’s best kept secrets. Though best known for its accessibility to some of Japan’s most iconic urban facilities, Chiba is more than just the gentle, reserved neighbor that many Tokyoites see it as.

If you take a trip to the prefecture’s southwest corner, you can get in touch with its rich natural beauty and peer into Japan’s spiritual past. 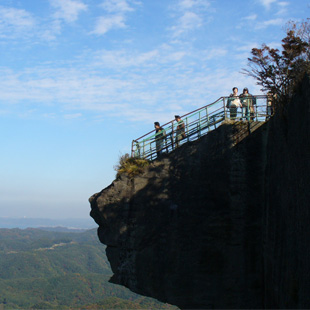 Forming the boundary between the Awa and Kazusa areas of the Bōsō Peninsula is Mount Nokogiri, a steep, verdant mountain that lies on the southern border of the city of Futtsu and the town of Kyonan.

Upon first glance, the mountain’s distinct, serrated ridge is fascinating. The unique shape is attributed to its history as a stone quarry—during the Edo Period, Mount Nokogiri served as a production area for stones used for construction—and is the source of its name. Mount Nokogiri literally means “Mount Sawtooth” in English, and the mark of its history is picturesquely evident to this day. 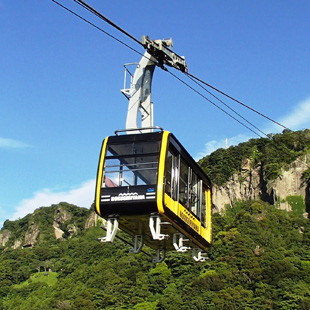 The traditional route for scaling the 329-meter mountain starts in Kanaya, a town on the eastern coast of Tokyo Bay. The trail should get you to the mountaintop in an hour on foot.

Alternatively, you can save time and energy by taking the Nokogiriyama Ropeway, which will take you directly to the summit. Since its establishment in 1962, the ropeway has been adored by locals and visitors alike, and attracts tourists throughout the year.

The ropeway starts in Futtsu, at the southern end of Tokyo Bay, and runs all the way to the top of the mountain. The ride takes around 3-5 minutes and the fare is ¥500 one-way or ¥930 both directions (¥250 and ¥450 for kids 6-11). The view of Tokyo Bay descending into the distance is a sight not to be missed, and the sheer comfort of the cable car doesn’t hurt either.

Once you make it to the top, you’ll see a narrow stone balcony hanging over a high cliff. This observation point is named “jigoku-nozoki,” or “glimpse into Hell,”  and offers a breathtaking 360-degree panoramic view spanning from Tokyo Bay to the Miura Peninsula and, on a very clear day, to the Izu Peninsula and even Mount Fuji. 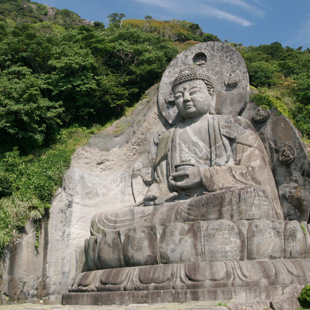 From the mountaintop, a short walk down the southern slope will bring you to the historic Nihon-ji Temple complex, where venerable Buddhist statues reside in harmony with nature.

Founded by Emperor Shōmu during the Nara Period (710-794), Nihon-ji is one of the oldest Buddhist temples in Japan, and a very valuable cultural property. Statues stand side-by-side in the complex, and include a representation of the Niōmon, or entrance gate, along with the Kongōrikishi, the guardians who traditionally protect it.

There is also a colossal statue of Yakushi Nyorai, the buddha of medicine and healing. At 31 meters tall, it’s the largest pre-modern stone carving of the Buddha, even taller than the famous statues in Kamakura and Nara’s Tōdai-ji.

Another impressive statue to be seen is a 30-meter depiction of Hyakushaku Kannon (Buddhist Goddess of Mercy and Compassion), which was built after World War II to pay tribute to fallen soldiers.

Mount Nokogiri, the Nokogiriyama Ropeway, and Nihon-ji are just some of the wonders to be found in Chiba. Get out of the city this weekend and go explore the wondrous nature that awaits you right next door.

Take the JR Uchibo Line to Hamakanaya Station. From Tokyo Station, the trip takes close to two hours. For quicker access, consider using the Tokyo-Wan Ferry, which runs between the Port of Kurihama in Yokosuka and the Port of Kanaya in Futtsu. The ferry crosses Tokyo Bay in about 40 minutes, and departs once every 30-50 minutes depending on the season. The Nokogiriyama Ropeway is a 10- to 15-minute walk from either Hamakanaya Station or the ferry port.