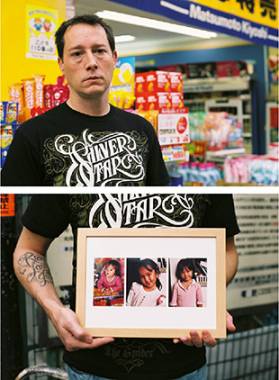 This article was originally published in January 2014 in Metropolis issue #1035.

It sounds like something out of a John Grisham novel—but it’s not. “The gentleman was here on a holiday in January 2013 with his family,” explains Bruce Gherbetti, deputy chairman of Kizuna Child-Parent Reunion, discussing the case of a Canadian man who had reached out to their organization after his Japanese wife abducted their son. “During the second week of their vacation he went to have a shower, and when he got out—they were gone. He hasn’t heard from his wife since and has no idea where they might be.”

Sadly, the man’s case is just one of many on Kizuna’s books. The organization, an NGO pressing to restore parent-child rights in Japan, specializes in helping “left-behind” parents deal with child abductions to—and within— Japan by their spouses. Kizuna chairman John Gomez estimates there have been about 3 million parental child abductions in Japan since 1992. Gomez himself is a left-behind parent, or LBP. “That’s roughly 150,000 cases per year, and every one of those is a human rights violation,” the soft-spoken Gomez says. “I took data from the Ministry of Health, Labor and Welfare and looked at divorces in Japan from 1992-2011. Primetime NHK news program Close Up Gendai in September 2010 [also] suggested 58 percent of parents lose access to their children after divorce. This is being acknowledged and recorded as an accurate estimate and translates to 1-in-6 children in Japan having lost a parent through divorce.” Its divorce figures may be consistent with rates worldwide, but Japan is unique in that child abduction after separation or divorce is legal according to its family court. Only one parent is recognized as having shinken (parental rights) with the other expected to forgo all parental privileges. While the vast majority of cases concern Japanese couples, globalization has seen an increasing number of intercultural relationships in which children can effectively be snatched from their non-Japanese home country and brought to Japan—no questions asked. Although Japan unanimously passed legislation to allow it to join the Hague Convention on the Civil Aspects of International Child Abduction in the spring of 2013 [see below], it only applies to future cases. There are also doubts among left-behind parents, lawyers and others alike that not much will change unless domestic laws are also addressed. Gherbetti is one of the skeptics. “The implementing legislation Japan has passed to accede to the Hague Convention is flawed in many ways. It allows for big loopholes in and around the non-return of children, specifically concerning Article 13(b), which states that if there’s a grave risk to a child, then that child shouldn’t be returned to their country of habitual residence. Japan’s legislation…adds categories where they can deny the return of a child abducted to Japan post-ratification.” According to Gherbetti, a similar scenario exists with the legislation Japan has passed concerning visitation and access. 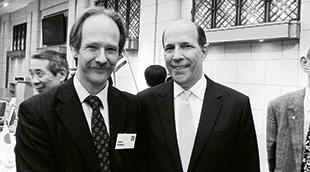 To that end, Kizuna seeks to become an authorized service provider with permission to implement and facilitate visitation under the Hague Convention in Japan, which requires cooperation between governments and professional experts versed in child-parent reunion issues. It’s part of the organization’s charter to focus on solutions, say Gomez and Gherbetti—yet Kizuna acknowledges that changes to local laws will make more of a difference. “I think Japan has agreed to sign and implement the Hague Abduction Convention primarily to reduce the pressure from the United States, which has been ramped up over the last four years. When Japan accedes, it will be the 90th country to join the Convention and the last of the G8 countries to do so. But will they be compliant? Probably not,” says Gherbetti. “On the other hand, legislation has just been approved unanimously in the US House of Representatives—House Resolution 3212: Sean and David Goldman International Child Abduction and Return Act of 2013—which gives the president the opportunity to sanction and penalize member countries that are non-compliant with the Hague. I think the gaiatsu [outside pressure] is going to have to remain to ensure Japan is partially compliant.” Indeed, in mid-December, the House voted to create an annual report to assess child abductions across all countries and to require President Barack Obama to take action against nations who remain noncompliant. Potential US measures include refusing export licenses for American technology, slashing development assistance and postponing scientific or cultural exchanges. However, the final decision on whether to proceed with punishment would remain with the president. And then there remains the situation with domestic Japanese law and policy. “The Japan family court system is the root cause of international and domestic abduction cases alike,” says Gomez. “Both kinds of cases are interlinked as the family court ignores foreign court orders and visitation is not enforced. This is despite Japanese Civil Code Article 766 taking effect in April  2012. It requires boxes be checked on divorce forms stating that parents have agreed to a child visitation plan—and that there have been discussions on child support payments—but Kizuna has found via government data that while most divorces go through, only 50 percent of people getting a divorce check the boxes and there’s no follow-up to see whether they comply. “Furthermore, the family court continually validates claims of domestic violence without thorough investigation and always gives sole custody to the parent who has abducted the children.” It’s a point that international family attorney Jeremy Morley, based in New York City, says is a sticking point, describing sole custody akin to “’finders keepers, losers weepers’ in its rawest and most cruel form.” He also mentions the United Nations Convention on the Rights of the Child. Japan signed that treaty two decades ago, yet has failed to comply with its principles when it comes to parent-child abductions. 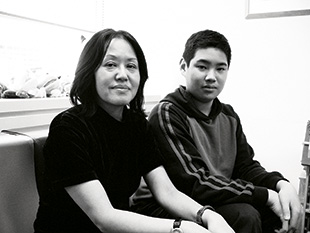 This lack of compliance and ignoring of foreign court orders is something Japanese national Masako Aeko Suzuki knows only too well. Married, living in Canada and mother to a boy, Kazuya David Suzuki, her marriage broke down in the mid-2000s. “My husband, a Japanese, abducted our then 12-year-old son to Japan in 2006,” she recalls. “This was despite the Hague Convention, which I only learned about after my son was kidnapped. A Canadian court also ruled for joint custody and that my son not be forcibly taken to Japan, but by the time this ruling came through, it was too late.” Masako retuned to Japan and tried to find her son. She struggled with the archaic family law system and its requirements. She learned of other LBP in Japan and was particularly struck by the international cases, given the circumstances under which her own son was abducted. She reckons she has spent over $100,000 on legal fees both in Canada and Japan and has taken her case to the High and Supreme courts. “My ex-husband Jotaro Suzuki was granted sole custody of my son by the Japanese family court in late 2006; this is standard for abduction cases. I was later granted very brief visitation rights, but Jotaro and Kazuya again disappeared and I haven’t heard from them since. “In order to apply for further visitation rights, I had to supply my son’s address as per the jyuminhyou (official address registration), but I didn’t know where he was because he’d been kidnapped! It doesn’t make sense!” Ms. Suzuki admits to being broken, but not defeated. “[Since returning to Japan] I decided to establish my own organization, Left Behind Parents Japan, to help other struggling LBP.” Part advocate, part translator, part interpreter and part counselor, her workload has only increased. 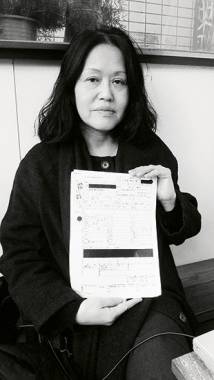 It’s a similar situation at Kizuna, say Gomez and Gherbetti. Future goals are to recruit more volunteers and ramp up fundraising, educate the Japanese public about the global standard of joint custody and reconnect children with their left-behind parent while honoring their best interests. Says Gomez, “This work to reunite children with their parents and change the system in Japan is my life’s mission. We have targets and milestones we’d like to achieve, such as enforceable visitation rights and guidelines for reasonable terms of visitation that permit a parent to maintain a relationship with their child, throughout separation and divorce. That means the number of hours is sufficient; typically, visitation hours in Japan equate to only one to two hours per month. After that, eventually we’ll look at joint custody, and denial of access should be criminalized. I don’t know how long it will take to change that, but I’ll be working on that indefinitely.”

The 1980 Hague Convention on the Civil Aspects of International Child Abduction works to ensure the prompt return of abducted children to their country of habitual residence. It does so by compelling its signatories to respect the custodial rights of the left-behind parent. If Japan were a signatory, the Japanese courts would be obliged to order the return of children to their country of habitual residence prior to the abduction. Instead, as is almost always the case in Japan, the court orders a new hearing so that it can decide custody (disregarding previous decisions), which is exactly what the Hague Convention seeks to avoid.

Says Gomez: “In terms of enforcement of visitation, we’re starting to see an inkling of the beginnings of enforcement. This is because in March 2013, a Japanese Supreme Court ruling upheld a Hokkaido High Court ruling that financial penalty for failure to comply with a visitation agreement was legal. Optimistically, I hope this brings about systemic change.”

Many of the people interviewed for this story said it was difficult to pinpoint any signs separate to general marital discord that suggest one’s partner may be considering abducting their children. Bruce Gherbetti sums it up thusly: “I don’t know if there are any warning signs per se that would differentiate a potential abductor from someone who’s just in an unhappy marriage, but one of the things that people might want to be wary of is the issue of separation itself. From my own personal experience, I wouldn’t recommend talking about separation. That could possibly tip someone into abducting.” The Children’s Rights Network (see below), a treasure trove of information on child abduction on the internet, has also published a useful parental abduction preparedness checklist. 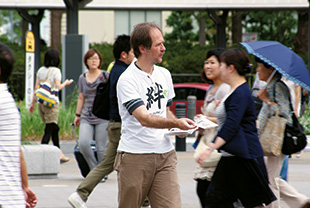 Kizuna is planning an invitation-only fundraising event to assist efforts to reunite left-behind parents with their missing children. The Kizuna CPR Gala Networking Fundraiser is by invitation only, if you’d like to attend and show your support, please contact the organization directly (info@kizuna-cpr.org) to receive  an RSVP invitation. The event will be on Tuesday, February 25 from 7-10pm in central Tokyo. There will be a selection of fine imported wines on offer, an expert sommelier on hand to guide the tasting and specially paired food plus other entertainment. Tickets are ¥10,000. For further information, please contact them at info@kizuna-cpr.org or visit their website at www.kizuna-cpr.org

Rights of the Child 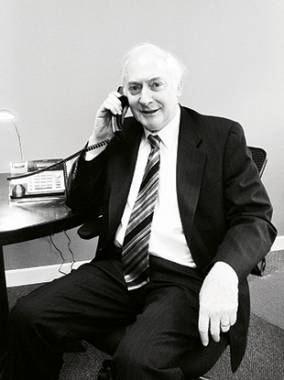 “The U.N. Convention provides that countries shall use their best efforts to ensure recognition of the principle that both parents have common responsibilities for the upbringing and development of the child. Unfortunately, Japan’s legal system does not adequately protect this right. In Japan it is rare for a court to effectively enforce the fundamental human right of both parents after a divorce to have a significant role in the life of their children (and the fundamental human right of children to have both parents in their lives). This will likely make it difficult for the Japanese courts to effectively implement the Hague Abduction Convention.”—international family law attorney Jeremy Morley.