When Tsukiji fish market first opened on the banks of the Sumida River it was itself relocating. The tragedies of the 1923 Great Kanto Earthquake had reduced most of the city to burnt ash and rubble, the original Tokyo fish market in Nihonbashi included. An assortment of open-air fish stalls had existed in some iteration on the neighborhood’s river banks since the 1600s. Now, after an 83-year tenure at Tsukiji, the market again faces reinvention at its new location in Koto Ward’s Toyosu district, at the edge of a strip of landfill that stretches into Tokyo Bay, on the site of a former Tokyo Gas factory. This Toyosu market relocation was not born out of tragedy, but the city government’s concerns about overcrowding and decrepit buildings that, after decades of daily operations, were in need of repair.

The last weeks of the market saw visitors funnelling into Tsukiji’s familiar narrow walkways and counter restaurants for farewell tours and final meals. Others queued before dawn for a glimpse of the mythologized tuna auctions. Live produce wriggled, hon-maguro were butchered, and the ground was sopping wet as tourists making the most of their jet lag explored the inner market, snapping photos with their DSLR cameras. These cramped quarters and lively morning hours are what made Tsukiji an international destination. 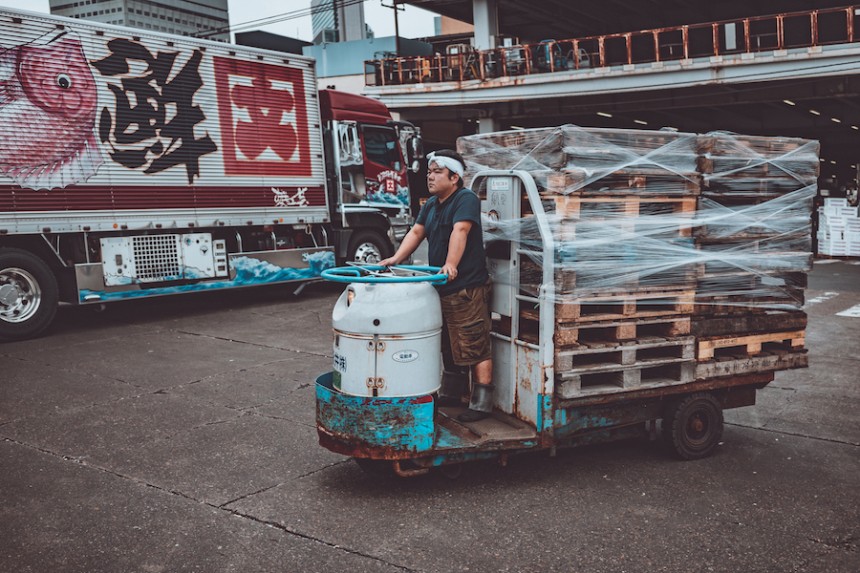 A market worker on a turret truck in Tsukiji’s inner fish market. Photo by Stephan Jarvis

While the outer market, a collection of 500 shops that border the facility — ranging from unidon (sea urchin rice bowl) restaurants to sushi knife retailers — will remain in its current location, the inner market has undergone a full upheaval. As of October 6, the market’s final day of operation, 550 fish wholesale businesses and 100 vegetable traders made the move to the new Toyosu facilities. The night after closing, hundreds of wholesale workers drove their turret trucks, a visual metonym for the market, across the Kachidoki Bridge on a 2.5km journey to their new home. Tsukiji’s buildings are set to be demolished and the land used as a temporary transportation depot for the Olympic Games (housing 3,000 cars and buses). A committee has been assembled to decide the site’s permanent future. 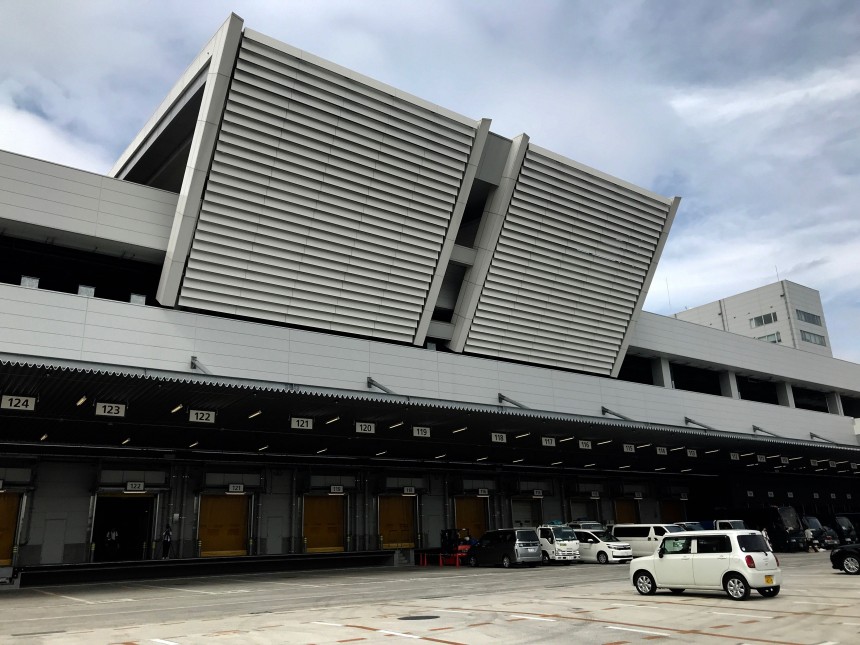 The exterior of the new Toyosu fish market.

Among the businesses setting up shop at Toyosu are Tsukiji’s most famous restaurants, many of which operated within the inner market boundary. Daiwa Sushi and Sushi Dai, renowned sushiya known for their loyal fandoms and long queues, are among the transplants. As is Oedo, a kaisendon (sashimi and sushi rice bowl) shop that has been in operation since Tsukiji’s first days, spanning three generations of owners. For these restaurants, there are serious concerns about the Toyosu move: worries that customers will not bring their business to the new location, reports that the soil beneath the new site is polluted, and a lack of government support for relocation costs. But ultimately, the relocation has been in the works for nearly twenty years and it’s difficult for these shop owners to lean into sentimentality or frustration when their business is undergoing its most radical change in decades. At Oedo’s new Toyosu shop, the daily concerns are more mundane than these contentious issues: the shelving space is too narrow and the assembly process needs to be reconfigured. At another restaurant, customers remark that the stools are too high for their countertops. When a business has been doing things right for half a century, it takes time to reimagine its operations in an entirely new context. 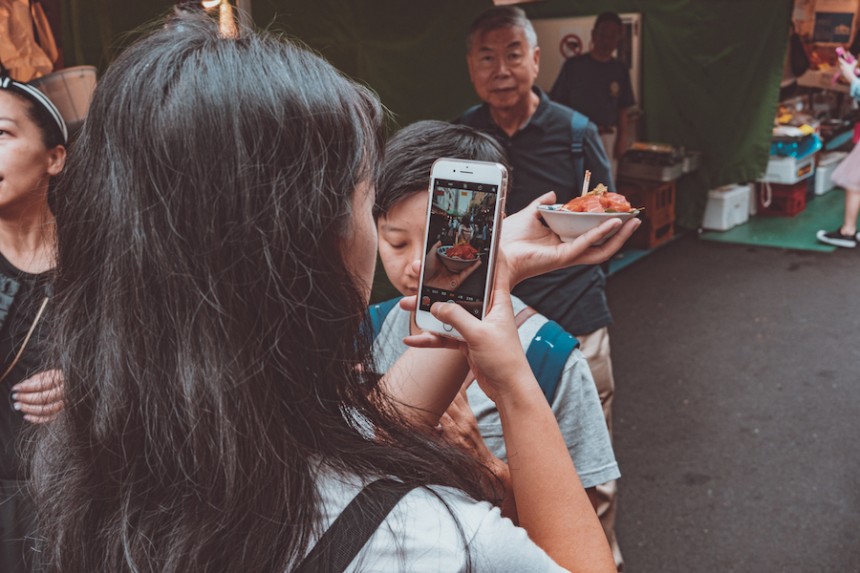 A visitor to the outer market photographs her seafood bowl. Photo by Stephan Jarvis

Metropolis was on-hand for the opening ceremony of the Toyosu fish market. The new site has exchanged crowded alleys and deteriorating structures for slick white-walled airplane hangers and a campus that balloons to nearly twice Tsukiji’s size. The first word that comes to mind here: sterile. Few would argue that sterility is not desirable in a produce market, especially one that operates on this massive scale. And there are distinct advantages to the operational improvements, since Tsukiji had been challenged in recent years by the increase of direct produce sales to restaurateurs and retail chains, bypassing the market middleman altogether (the volume of seafood products passing through Tsukiji market handlers decreased by nearly a third over the last 10 years). But as one of Tokyo’s most popular tourist attractions, sterility could be the Toyosu market’s downfall. 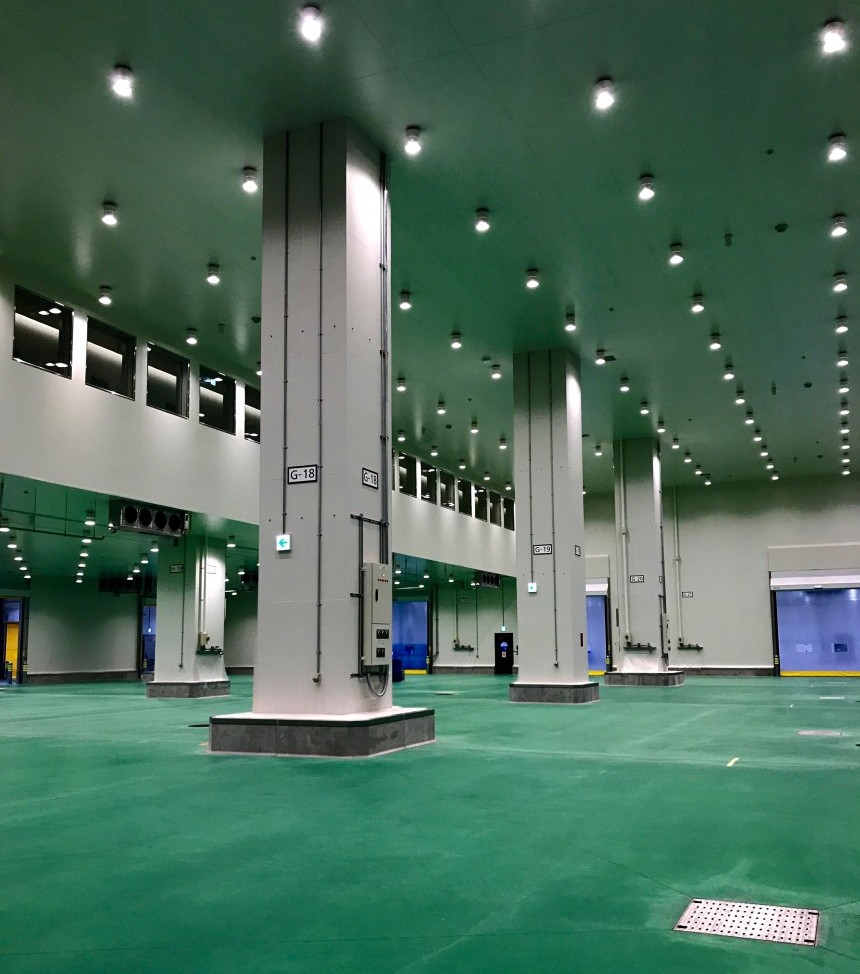 The tuna auction area of the new Toyosu fish market.

This tension between a functional fish market and a Tokyo attraction is not new. For decades, Tsukiji held the title of world’s largest seafood market with little fanfare. It is only in the last 20 years or so that tourists invaded these spaces, becoming both a nuisance and a fundamental part of the market’s business and identity. The famous tuna auctions were carried over in the move, but the experience will be very different: at Tsukiji, you were on the ground, you could see the tuna, sliced open for assessments of its marbling and freshness. Now, tourists are secluded on a second-story viewing box, looking down on the daily events through a glass window.

Lining the hallway of this viewing area is a timeline documenting the history of the Tokyo fish market. Archival photos and display panels explain the institution’s long evolution, from its Nihonbashi roots to its Toyosu present. The message is clear: throughout its history, the market has always lived on the banks of Tokyo.