The Myth of a True Chinatown in Japan

Searching for community in an amusement park

Rainy weekend dim sum, nighttime snowball fights during the New Year, rounds of grocery shopping with old friends. This short sentence, while possibly evocative, can’t begin to encapsulate the countless cherished memories I created in the New York City Chinatowns, namely Manhattan and Flushing. I’m in debt to these neighborhoods, which I know better than any other in the city, for they shaped my worldview and life’s trajectory. Moving to Japan decisively severed that connection, prompting me to search for a place to relive those moments, even if only in their shared essence.

Exiting the Yokohama-Chukagai subway station, I headed toward the historic Yokohama Chinatown. Unfortunately, the enthusiasm that had propelled me forward on this quest for knowledge was deeply eroded by past disappointments. Japan is said to have three Chinatowns, located in Yokohama, Kobe and Nagasaki, respectively. This was my last stop. I already had it on good authority that, though this Chinatown was considered the largest in the country, it lacked what I sought: a Chinese community. 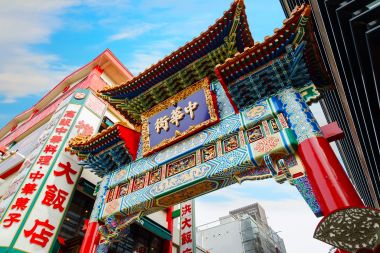 Chinatowns, and ethnic enclaves of all sorts, are sacred places. Often, these neighborhoods are starting points for immigrants in a new country and provide services that are otherwise unavailable in the host country. These areas are rich with entrepreneurial endeavors that are built for and sustained by community members, creating a dynamic, if somewhat insulated, economy. Where were the neighborhoods like Flushing, Queens in New York City? “Chinatown” in Japanese carries very different connotations, it turns out.

Located near the glittering and ultramodern business sector of Minato Mirai 21, the Yokohama Chinatown sits in a historic district known to have hosted merchants since 1859, when Japan opened the city for trade. Yokohama is an expressive city, communicating its past through its façades: the culmination of foreign cultures’ architectural achievements blended together naturally, sharing city blocks with shrines and traditional Japanese homes.

Chinatown grandly announces its presence with 10 paifang, imposing red gates that straddle the roads around the neighborhood. On any given day, the area draws a large crowd of Japanese tourists. People marvel at the numerous shops that went as far as to add decorative exteriors of dragons and phoenixes on large stone slabs, and awnings in the style of traditional roof tiling. Flashing neon signage can be seen in every direction, and the scent of tapioca and steamed buns wafts through the thoroughfare.

There was once a Chinese community that thrived in this area, but the Great Kanto Earthquake of 1923 left the area in a poor state. Many immigrants returned to China. Growth was further impeded by the Second Sino-Japanese War in 1937, and a large number of the remaining Chinese in Japan integrated into Japanese society.

“This place, this neighborhood,” a Japanese staff member of a panda-themed shop told me, “is not for daily living. It’s all tourism now. What I’ve seen on TV about Chinatowns abroad, well, it’s nothing like that here.”

“How long has it been this way?” I asked. She thought for a moment.

“Before, no one paid attention to Chinatown. It was dirty — litter everywhere, but then there came efforts to beautify the area to draw tourists.”

In the 1980s, when Japan’s economy was at its apex, the city began construction on a new business sector, Minato Mirai 21: “Port of the Future in the 21st Century.” As shiny new corporate offices and a midtown amusement park were constructed, nearby Chinatown boosted its profile too.

“There are Chinese business owners here, for sure, but plenty are not. Some, like the owner of this building, are half-Chinese and half-Japanese, while some are fully Japanese,” the woman explained before returning to work.

I entered another souvenir shop, this one dripping with gold colors, from the awning and the workers’ uniforms to the charms hooked along the walls throughout the store. Mrs. Li, a staff member who spoke at length about Chinatown in flawless Japanese, brimmed with enthusiasm. An immigrant from Taiwan, she moved to Japan over 20 years ago. Her motivation for moving from Tokyo to Yokohama encapsulated the duality of this neighborhood.

“When my daughter was born, I wanted to make sure that she knew Chinese. That she could read Chinese properly, and understand the culture. She speaks Japanese too, but I wanted her to know her heritage. But we [Chinese-Taiwanese people] don’t live here, we commute from other areas.”

“This place feels entirely different from other Chinatowns abroad because of that. Every shop seems to cater to Japanese people,” I said.

She agreed. Chinatowns in Japan are areas with Chinese history, but they are now tourist spots that have been designed to cater to Japanese tastes, both in terms of the Japanese-Chinese cuisine and the aesthetics of the neighborhood. Yet, because of its history, it has drawn Chinese entrepreneurs who wish to capitalize on the revitalization efforts, in turn bringing more Chinese to the area as workers. But it’s like working at an amusement park, and at the end of the day, the workers return home.

Similarly, due to its history, there are still spaces for the Chinese community — namely two large schools that provide an all-Mandarin primary and secondary education, as well as two Chinese Buddhist shrines. I walked down an alleyway that I thought would lead to the main road; though I found myself at a dead end. I heard a group Mandarin lesson for kids coming from a nearby home.

Is there an area nearby that Chinese people tend to gravitate towards? A place where there are shops made by and for the Chinese community?” I had asked Mrs. Li, eager to locate the Chinese-run businesses she had mentioned.

“A little north of here, between the Ishikawacho and Kannai stations,” she said.

I knew, prior to visiting Yokohama, that what I was in search for — a sort of Chinatown that I knew — was not a fool’s errand nor an ignorant assumption that what I was familiar with existed everywhere. In fact, Osaka’s Namba and Tokyo’s Ikebukuro have Chinatowns that are meaningful in their impact and service to local Chinese communities. However, they remain largely unknown and have not been designated as “Chinatowns” locally.

Though the areas around Ishikawacho Station and Kannai Station could not rival Ikebukuro’s expansiveness nor Namba’s fragrant alleys bursting with authentic restaurants, the Chinese presence was clear. There were the necessities, decent-sized grocery stores and clinics, and restaurants with dishes too spicy or “foreign” to be palatable to many Japanese customers. In Japan, Chinatowns are historic spots revitalized for tourism — for those in search of connecting with or learning about Chinese culture, it’s necessary to steer clear of the beaten path and venture to the heart of Chinese culture.

Yokohama’s oldest British sports pub: The Tavern has been showing sports for over three decades