Fashion and charity can be rather uncomfortable bedfellows, as the unnecessary excess of fashion can feel awkward in the light of genuine need. This is a reality of the world we live in, and sometimes a reminder of this inequality is a necessary one, especially for those of us in fashion with a tendency to get caught up in our own reflections. 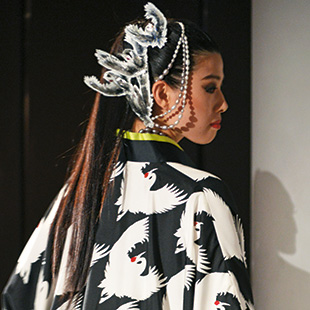 In this author’s case, the last time this disparity was hammered home with absolute clarity was in the aftermath of the March 11, 2011, Tohoku earthquake, which forced the cancellation of all but a handful of the Tokyo Fashion Week shows. Those that did go ahead did so in shaking venues, and with an understandable cloud over the proceedings. Since then it’s been possible to cast these grim realities aside, even when individuals continue to be displaced, and communities continue waiting to be rebuilt.

It’s important that events endeavor to place the on-going situation to the fore in our minds, and fashion is doubtlessly one of those avenues with reach. Its part is particularly pertinent, in that there’s something transformative about fashion. A garment has the power to change not only how the individual is perceived, but also how they perceive themselves. I don’t suggest that this is the end goal, but rather a metaphor for the power of fashion to offer change—and through change, hope.

This idea has great resonance for NPO “Runway for Hope” founder Dr. Sena O. Vafa, himself a refugee displaced from his home country of Iran, who, after a period in a Pakistan refugee camp, made his way through an extraordinary academic career to eventually base his activities in Tokyo since 2008. Originally founded as a means of mobilizing the Tokyo fashion scene to assist displaced children beyond its borders, the events of 2011 forced the organization to address domestically the internally displaced and orphaned. So far, the charity has held a series of fundraising events, as well as embarked on establishing a homestay program with America to reiterate to those affected that the world continues to care about their plight. 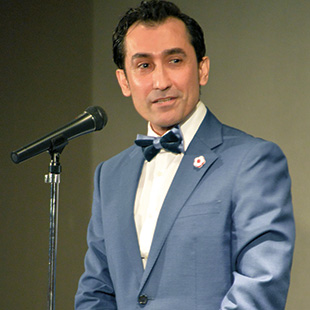 Runway for Hope’s latest endeavor was the Project Runway 2015 fashion show, held in the Roppongi Hills Club to a rapt audience of Tokyo socialites. In attendance was the special ambassador for Peacebuilding of Japan, Akiko Yamanaka, who spoke not only of the unresolved challenges, but also the role fashion can play in this resolution, before giving way to said fashion in the form of a runway show from legendary fashion designer Yumi Katsura.

Yumi Katsura chose her “Yuzen” line for the fashion show, the accessible bridge between her haute couture line, which realistically is only available for rental and not purchase—that’s the level we’re dealing with here—and her ready-to-wear line.  Moreover, the line balances a mixture of Western and Japanese aesthetics, mixing traditional Japanese artisanal techniques dating back to 17th-century Kyoto tradition, but in easily worn European-inspired garments, including capes, ponchos, and flowing dresses—fitting for the multicultural audience at the show.

In fashion terms, it’s always interesting when a Japanese designer takes the lead on Japonism, the genre of mixing elements from tradition with Western standards. In cases where a non-Japanese designer takes the lead—for example, when Jean-Paul Gaultier or most recently Thom Browne tackled the topic—the results might appeal to the uninitiated, but those watching from Japan can’t help but cringe. In Yumi Katsura’s case, her work simply feels authentic, even at its most extreme. While I wouldn’t be so essentialist to say that only Japanese designers can do Japonism (see Rick Owens for a good Western example), you really need to know the subject matter to do the genre justice.

Those wishing to get involved with the Runway for Hope project or make a donation can visit the link below. The next runway gala will be held in May 2016, if you want to show your support in person.

Dotting the J of Japonism