The American Who Brought Ghibli to the World

An interview with Steve Alpert, author of ‘Sharing a House with the Never-Ending Man’

When Connecticut-native Steve Alpert joined Studio Ghibli as the head of its international division in 1996, Hayao Miyazaki was hardly a household name outside of Japan and, with a few exceptions, Ghibli’s films hadn’t even been released outside of their home country. During his 15 years at the animation studio, Alpert, a Japanese-speaking American who also worked for the Walt Disney Company, wrestled his way through language barriers and tedious distribution deals to introduce Princess Mononoke, Spirited Away and countless other masterpieces to the world.

“I was the only gaijin (foreigner) in a very traditional Japanese company,” writes Alpert in the introduction to his business memoir “Sharing a House with the Never-Ending Man: 15 Years at Studio Ghibli,” released in English on June 16, 2020. Alpert’s newly published book is a comedic and detailed portal into what it was like to work with one of the world’s most influential animators, as well as the exuberant chairman Yasuyoshi Tokuma, during a time when screening a movie abroad meant traveling with 250 pounds of metal film canisters.

Metropolis had the pleasure of speaking with Alpert, formerly known as Ghibli’s “resident foreigner,” about the studio’s future, showdowns with Harvey Weinstein and what he misses most about Tokyo.

Metropolis: You were tasked with heading Ghibli’s international division at a time when most of Ghibli’s films hadn’t been released outside of Japan. How did it feel taking on that responsibility early on?

Steve Alpert: Like a wonderful opportunity. I thought the films were great and had confidence that it would be easy to find distribution for outside Japan. I had no idea how difficult it was going to be. 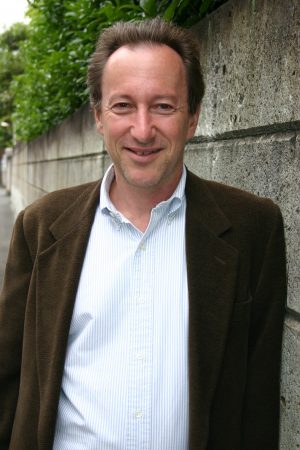 Steve Alpert recounts his 15 years at Studio Ghibli in his newly published memoir “Sharing a House with the Never-Ending Man.”

M: Netflix recently secured streaming rights to almost all of Ghibli’s films. In what ways have the internet and online streaming changed the distribution model for animated films, or films in general?

SA: Studio Ghibli is not primarily a commercial enterprise. Studio Ghibli is a film studio in the true sense of the word, and primarily a maker of theatrical animation. Films that are made to be seen in a darkened movie theater with an excellent sound system and an audience. That is its great art. Studio Ghibli was founded and is run by the artists and filmmakers who make the films. From the Ghibli filmmakers’ perspective, how the films are distributed theatrically has always been very important because they were made to be experienced in a certain way. The very best way to see a Ghibli film is in a movie theater.

That’s what always kept Ghibli from agreeing to streaming. That and the limitations of early streaming technology. It’s a company of artists that wants to preserve its art. But obviously, technology has advanced and the ability of electronic media to deliver sharper images and excellent sound through smaller devices has improved the viewing experience. There is also the convenience of viewing in the comfort of home, flexibility of when and where to watch, and even being able to pause to eat or visit the bathroom, something which cinema purists may be unhappy about. Even before the coronavirus shut down the world’s movie theaters, general audiences have been reevaluating the experience of seeing, or only seeing films in a movie theater. Will the best way to see the films that Ghibli has already made still be to see them in a movie theater? I think so. But that’s me. I’m old, and I’m an old-fashioned guy.

M: Today, Hayao Miyazaki is a household name around the world. “Sharing a House with the Never-Ending Man” provides an intimate portrait of the artist, including his passionate dislike of traveling and computers. What is one thing you don’t mention in the book about Miyazaki that might surprise his fans?

SA: Well, first off, Hayao Miyazaki doesn’t dislike traveling. He dislikes traveling on business to promote his films. I don’t know if it would surprise his fans, but one thing about traveling with Miyazaki is that you absolutely cannot get him to follow a schedule when he’s abroad and not locked in a room doing interviews or promotional events for his films. He tends to see things that most people don’t see, and you never know what might catch his attention and divert him from any plans that were made.

He also seems to know more than you expect him to know about any place you visit with him. When we were in New York, we went for an afternoon walk in Central Park. Miyazaki asked me how I was able to find my way in the maze of pathways around the big pond/lake in the middle. I said it was easy. You just look up and see where the tall buildings are. The next morning he got up at 6am and walked in Central Park alone. He came back to the hotel with a toasted bagel and coffee from a local deli.

Even in Japan, Miyazaki lives such an austere lifestyle (he almost never eats out in restaurants) and follows such a rigorous work routine (most of his waking hours are spent making or thinking about making films) that he never has time to buy things or has a need to carry money. The joke around the studio was that Hayao Miyazaki hadn’t used money in so long he didn’t know what Japanese money looked like anymore (Japan re-designed its currency in 2004). Probably not true, but we never expected him to have U.S. money on him or know how to use it. Or for that matter, how to order a bagel and coffee for take-out from a New York deli in English.

Studio Ghibli was founded and is run by the artists and filmmakers who make the films. From the Ghibli filmmakers’ perspectives, how the films are distributed theatrically has always been very important because they were made to be experienced in a certain way.

M: During your time at Ghibli, you received several awards on behalf of Miyazaki, including the Academy Award for Best Animated Feature for Spirited Away. Why do you think that film was particularly successful abroad?

SA: Because it’s a really great film. I think it might have been even more successful if the film hadn’t been ahead of its time and attitudes towards animated films had been different. Back then most people didn’t think of animation as something for children and adults to watch. Children only is what most people thought. Thanks to films like Spirited Away that’s changed now.

M: It must have been pretty challenging to be the lone gaijin at a major Japanese company for so long. How different would your experience be if you had joined the company today, as opposed to the early nineties?

SA: I’m not sure there still are companies like Tokuma Shoten. Yasuyoshi Tokuma was a personage from another era. Tokuma Shoten was a pretty old-fashioned Japanese company. But I’m sure that by now globalization has changed and will continue to change Japanese companies. Koji Hoshino (ex-Studio Ghibli president) and I used to joke that he and I were globalization personified (he spent time working in California). Cross-fertilization between the world’s cultures and businesses has been going on for a while now, and technology has quickened the pace.

I lived in Japan for more than 30 years. It used to be rare for a gaijin to speak Japanese. Is it now? I don’t know, but I don’t think so.

M: In one episode, Harvey Weinstein screams at you over a decision to cut the film Princess Mononoke. What was it like standing up to the then-Miramax-mogul?

SA: Actually it wasn’t that hard. To be honest, it was interesting and a little exciting. I grew up in the New York area and worked for a while in New York. I was used to people yelling when they couldn’t get their way. It might be a New York thing. And I could afford to have a more objective view of it. As I told Harvey, I had no aspirations to work in the film industry in the U.S. I didn’t work for him. There wasn’t really anything he could do to me.

But it happened at a party for the premiere of Princess Mononoke. I had been looking forward to the chance to speak with some of the people in the room that night who had flown in from other places. Instead, my evening at the party ended early.

M: What do you miss the most about working in Tokyo?

M: Lastly, I have to ask — what’s your favorite Ghibli film?

SA: It’s Nausicaa of the Valley of the Wind. I think my answer is partly colored by what I know about what it took to make this film. I already told Miyazaki this, and he was kind enough to make me a drawing of Nausicaa when I retired from the studio. 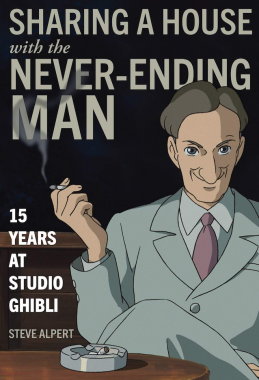 “Sharing a House with the Never-Ending Man: 15 Years at Studio Ghibli” is now available on Amazon and Stone Bridge Press.