Truth in Theatre: An Interview with Sheepdog Theatre

Powerful performances on the Tokyo frontier

While vibrant, Tokyo’s international theatre scene doesn’t have the same cultural force found in the great cities of Europe and America. Sheepdog Theatre, established earlier this year, is aiming to put this right, bringing small-scale, powerful theatre to Tokyo and its international audience. Ahead of its production of Ingmar Bergman’s Academy Award winning “Through A Glass Darkly” Metropolis spoke with Sheepdog’s founder and artistic director Michael Walker about theatre, its place in Japan, and what exactly it is that drives his dynamism.

Metropolis: First things first, how are you feeling about the show?

Michael Walker: Excited. This is the first show Sheepdog Theatre has ever done, and we’re excited to be creating something new and working with so many creative people for the first time. Being involved in this process, it’s one of the reasons I set up this theatre company in the first place – to see where we are now, what progress we’ll make and where we’ll be when the show comes out. It’s exciting, but of course I’m nervous as well. It’s overwhelming starting up a new theatre company and doing a first show in Tokyo, I don’t know know what to expect in terms of audience response or numbers, so a lot of question marks as well.

M: Tokyo doesn’t have the same community theatre scene as somewhere like New York or San Diego, do you think this will affect your direction or practice?

MW: I don’t think it will affect my artistic direction in any way, I’m pretty clear about what I’m interested in. The reason I wanted to set this whole thing up was to make shows I wanted to see myself, small cast, intense themes, you sit down, watch it and it just grabs you. I’m from an acting background and I love that organic collaborative process, I don’t come into something with a preconceived idea of what I want, things come together organically. A city the size of Tokyo, I’m surprised there aren’t more international theatre companies. There’s a big expat community and 13 million people in the city alone, not including the greater area. So there was an opportunity for us to create this off Broadway, off West End type of thing – the type of show I would want to see. A small cast in a small space with powerful relationships, powerful characterizations. I’m not interested in “acting” I want to see real people and real relationships. I want to be able to see those on stage and relate to them as people, rather than the “look at me, look at me”stuff you often see. 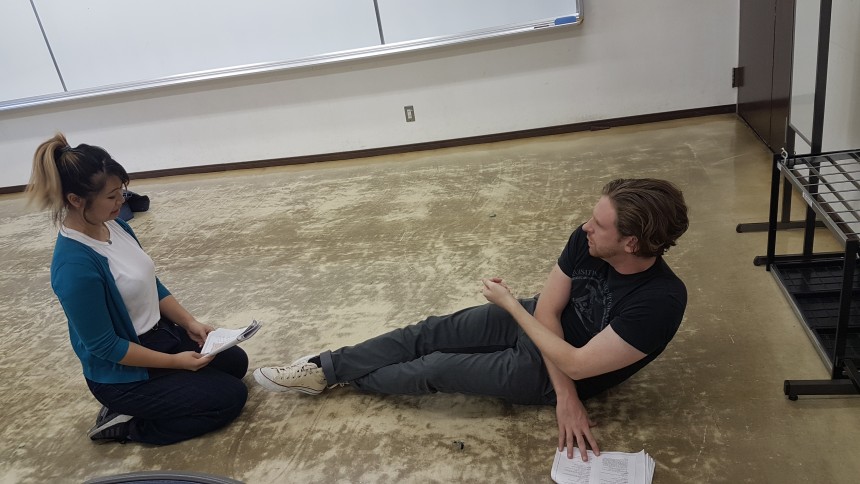 M: What do you think are the challenges that face international theatre in this environment?

MW: Good question. I’ve only been in Tokyo for a short time so I don’t know a lot of people, but surprisingly the amount of international talent in terms of actors and crew is pretty small. Of course you have the Tokyo International Players, who have been incredibly supportive, and Tokyo Theatre for Children, so a lot of people are devoting their time to a theatre company already, so finding people has been difficult. Before our stage manager came in I felt I was doing everything by myself, I’m funding it all myself, and before we start to gather some momentum with this show things are going to be tough. Rehearsal spaces and theatre spaces in Tokyo are expensive and it’s all coming out of your pocket, but I knew that from the beginning. When you can show people something good, then your brand can start to generate support both creatively and financially.

M: You were working with Theatre Iridescence and the International Players in Nagoya, can you tell us a little about that and how you view the importance of stretching across city boundaries for the international theatre scene in Japan?

MW: I think it’s super important. The artistic director of Theatre Iridescence is someone called Aya Kawakami, and the thing I love about her is that she understands the mechanics of theatre, and what she does has an integrity about it. I directed a show for them in June, and it’s a great experience to work with someone you can learn from. We’re talking about continuing that collaboration and working together again, obviously there’s a logistical challenge to that cross-city relationship, but working together was something I enjoyed a lot. She’s built Theatre Iridescence into a big company and created something of real value, I guess that’s what I’m hoping to replicate that – quality theatre. It was a great experience.

M: What is your approach to theatre? You seem to focus on the inter-personality of work and the authenticity of performance. If I might quote ‘It can unite us with something greater than our individual selves’. Let’s talk about that.

MW: I’ve talked about it before but for me theatre is about recognition. It’s about looking at a person or relationship and realizing that I’m not alone. I can see these people deal with something I relate with, something I feel strongly about. Theatre has that ability to impact us in such a strong way. It’s probably the most naturalistic art-form, I love film, but having those performers right there in front of you and the energy they exude – well I just think it can transform you. It can change how you think about a person, a relationship, yourself even. So many people think acting is just pretending, but it’s not, it’s the absolute opposite. Through performance great actors will reveal themselves and their own vulnerabilities to the audience – and we see those vulnerabilities in ourselves, and we just go “wow.” Acting is fundamentally about truth. We wear all these masks when we go through life, so my philosophy of theatre is basically in theatre we see what it really means to be human. For me it’s a very personal thing and a sacred place. If you go in with the intent of showing truth, then I believe that’s revealed in the final product. If something doesn’t resonate with the truth that we’re trying to communicate, then it doesn’t belong in the piece. 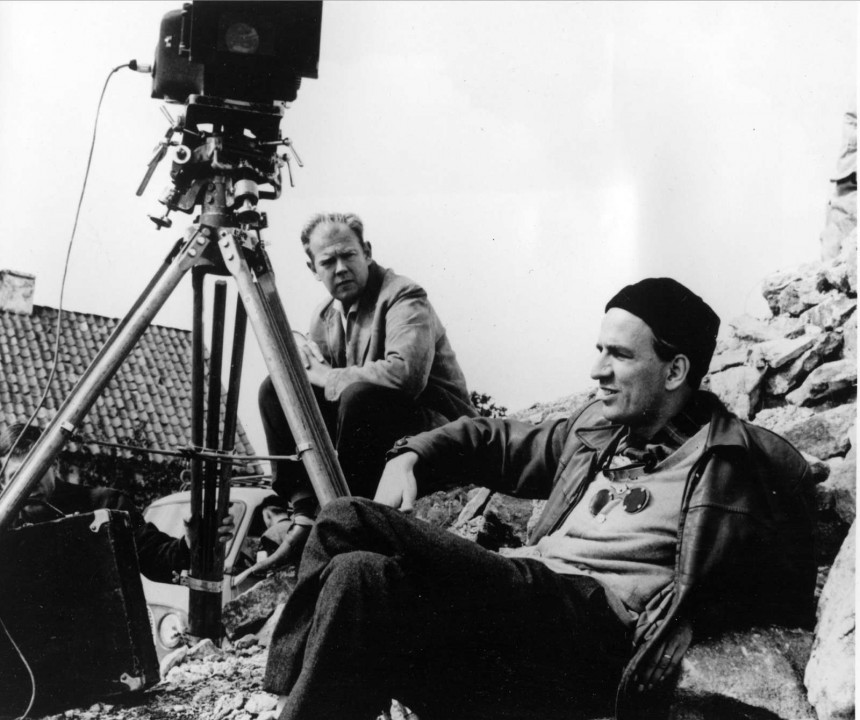 M: “Through A Glass Darkly” is quite a dark and delicate piece, how are you going about dealing with that?

MW: Yeah we’ve had a lot of discussion about that, they are some sensitive themes and quite confronting scenes in there. We’re just trying to find the truth of each moment and stay connected to the original material. This is why I chose the piece, because I knew it would push me as a director and push the actors in their roles and hopefully challenge the audience as well. It’s confronting but rewarding.

In terms of the set, Bergman filmed the piece on Farö, an island off the coast of Sweden, and that barren natural environment helped create a sense of isolation, a sense of being cut off, which is a central theme. The theatre that I’ve chosen, Theatre Shine, is a blackbox theatre and so it’s very barren and we’re not planning to do a lot with the set, so that lends itself to the almost claustrophobic feeling Bergman tried to create. But essentially it’s down to the actors to feel enclosed within each other.

M: What’s next for Sheepdog Theatre?

MW: Right now we’re just trying to make the best show we can make. Everything else comes afterwards and will depend on different circumstances. I want everyone involved to have a rewarding time and I want the audience to have a meaningful and authentic experience in the theater. A feeling that what they’re seeing resonates with real life. I’m also interested in collaborating with other theatre groups, not necessarily limited to Japan. Collaborating with groups who might want to come to Tokyo and touring ourselves, maybe taking something to the Edinburgh Fringe. Tokyo can also be quite a transitory place for many people, so I’m interested in creating a bridge between international and Japanese theatre companies, and see how that Japanese influence shapes us. 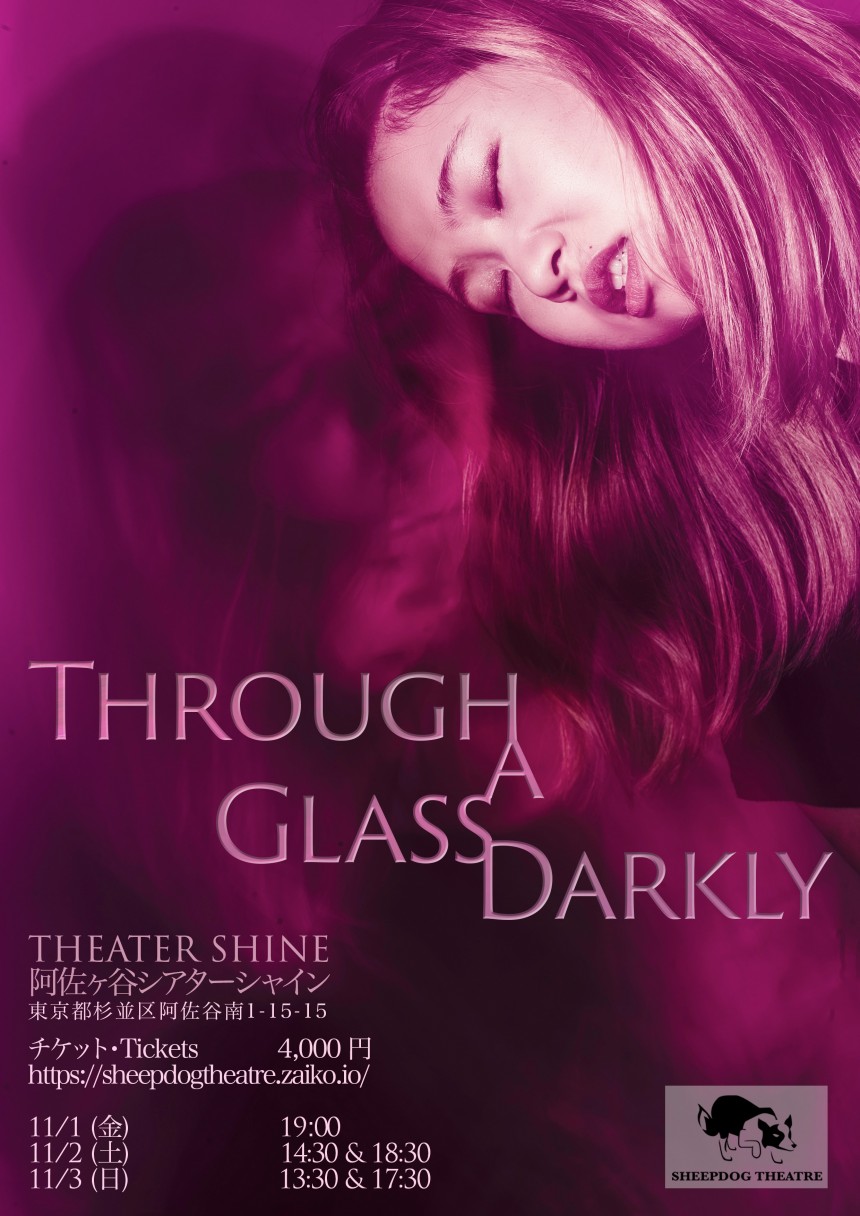 Sheepdog Theatre’s production of “Through A Glass Darkly” will be showing at Asagaya’s Theatre Shine on November 1,2 and 3. Tickets are available on their website.

Through A Glass Darkly

Half English, half Japanese, and (terrifyingly) 100% Norfolk. Kenji is making a life in Tokyo after someone unwisely left the door open.