Memory, loss, displacement and absence are all themes in the latest exhibition at the Mori Art Museum in Roppongi Hills. “Shiota Chiharu: The Soul Trembles” is the largest and most comprehensive exhibition devoted to the Japanese artist and it doesn’t disappoint. Vast, crowd-pleasing and philosophical, the exhibition is one of this year’s highlights in Tokyo’s vibrant art calendar so far.

Berlin-based Shiota is a superb multidisciplinary artist at the top of her game. The quiet and unassuming Osakan displays her extensive, often abstract and thought-provoking oeuvre with such bravado and skill that it astounds visitors as they enter the various exhibition spaces. Rooms crammed with interconnected red yarn; multitudes of hanging boats caught in the tangles; exquisite sculptures in glass and bronze; photographs, textiles and videos astonish and force the viewer to question their relationship with art, with others and, ultimately, with themselves.

Due to the nature of Shiota’s work (often spellbinding, Instagrammable, large-scale installations) it would be misguided to presume they’re devoid of substance. She’s also a very much engaged artist who, although she works with assistants, actually creates these installations with her own hands. The red yarn represents blood and human relationships while her use of black yarn, according to Shiota herself, “symbolizes the black night sky, the universe [and] the eternal black depth of infinity.” In an interview with Designboom she explains her penchant for using thread as a method to create. “Weaving gave me the opportunity to expand and I feel as if I am drawing in the air on a limitless space.” 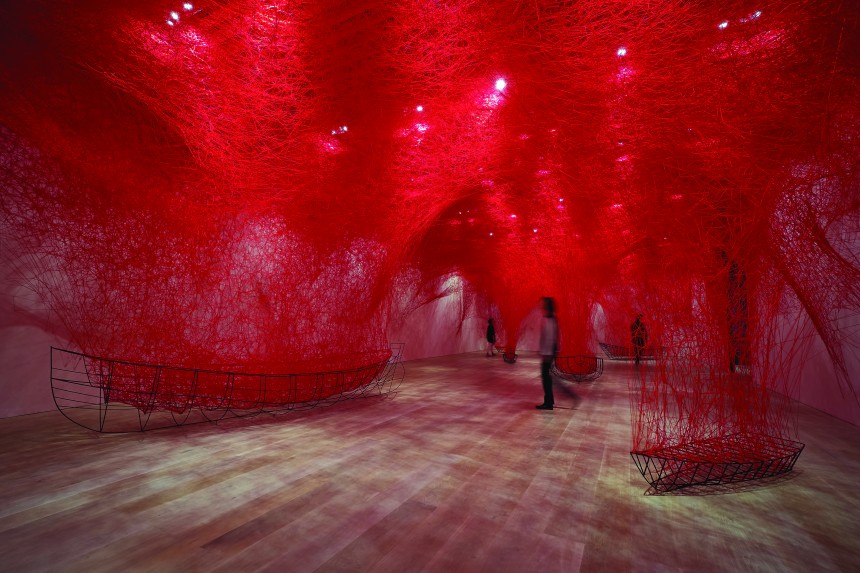 The showstoppers in this show are “Uncertain Journey” which consists of a huge room covered in red strands, “In Silence,” a piano and chairs encompassed by black strands and “Inside Outside” which entails a huge bundle of windows that represents Shiota’s obsession with memory. Every window has had people who have looked through them. Windows also serve as separation — a subject often associated with her adopted city of Berlin — and explores, deftly, the notion that as we walk through the exhibit we are unsure if we are inside or outside. This subject is recurrent throughout Shiota’s work as she deals with her own feelings of displacement as a Japanese artist based in Berlin and being devoid of a true homeland or identity.

The exhibition also deals with the Holocaust, observed in works such as “Accumulation – Searching for the Destination,” which is composed of a huge amount of suitcases lifted into the air with red yarn, and other works which use collections of old shoes also intertwined with the ubiquitous threads. Images of suitcases, bags and shoes raise the themes of horror, dispossession and ultimately transportation to death. While viewing Shiota’s breathtaking work, it’s obvious that her time in Berlin has had a huge impact on her artistic psyche. In fact, the artist who most shares Shiota’s worldview is the renowned Irish writer and playwright Samuel Beckett, who also spent many of his later years in Berlin. Shiota’s breadth of work and artistic philosophy bears much resemblance to Beckett and the Theater of the Absurd — a postwar artistic movement centered around existentialism. The inner desolation that both Beckett and Shiota see is encapsulated in Beckett’s brilliant prose seen in works such as “Malone Dies,” which features the infamous line “Nothing is more real than nothing.” 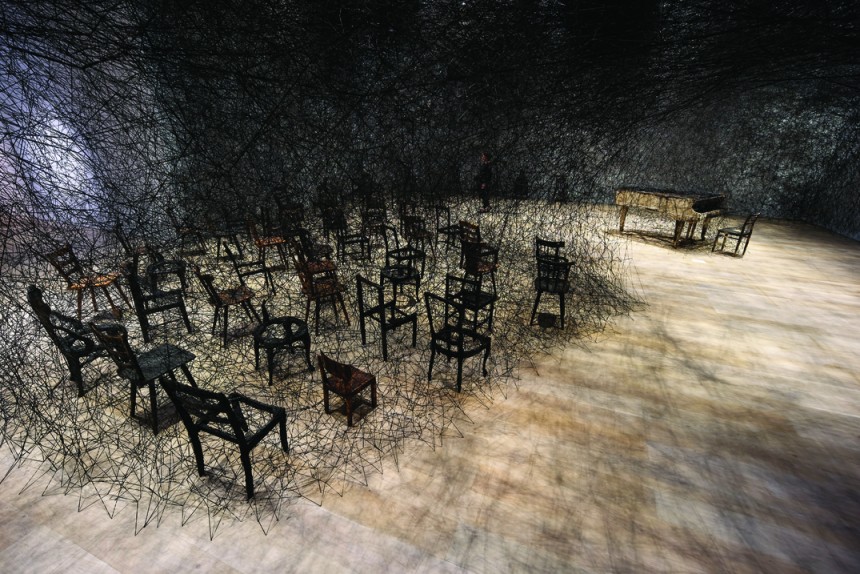 Shiota, in the 1990s, trained with the high priestess of performance art, Marina Abramovic. Shiota’s performances included rolling around a hole in a forest and washing mud from her body, these kinds of experiences remaining central to her progression as an artist. In her 20s, she decided that painting wasn’t enough. She wanted to be a part of the painting, involved as a character in her work, which led her to experiment in performance art and beyond. Indeed, her involvement in actually creating the huge installations for each space in which they are exhibited can be considered as performance itself.

Just when the visitor feels like they understand Shiota, as an artist, they enter the “set design” room. Here, videos of her expansive work with European opera and theater companies repeat on a series of TVs besides scale models and other artifacts. Her hugely impressive work in set design itself would categorize her as one of the most original and innovative artists alive. When you consider, however, that this is just a small additional portion of her artistic output you understand the gargantuan nature of her work as one of the most intriguing and multidisciplinary artists working in the 21st century. The Mori Art Museum, then, has outdone itself with this awe-inspiring and genuinely brilliant exhibition which will stay with viewers for years to come and will surely inspire others to take up her creative mantle.