The Berlin Wall stood for 10,316 days, or just over 28 years. This week marks the same number of days since the Berlin Wall fell. In commemoration of this momentous occasion, the German Embassy has commissioned a mural on the wall that surrounds its consulate in Hiroo. Unveiled on 6th February 2018, the President of Germany, Dr. Frank-Walter Steinmeier, visited this neighborhood in Shibuya to reveal a collaboration between the German graffiti artist Justus Becker and the Tokyo-based Japanese artist Imaone. 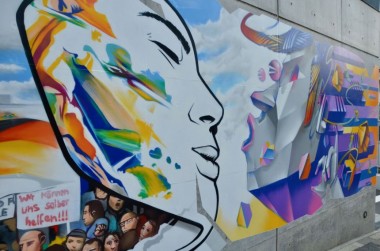 The mural retells the story of the original, historic wall. The Berlin Wall was a symbol of the Cold War and the tensions between Eastern and Western Bloc countries in the years that followed World War II. When the Berlin Wall fell on 9th November 1989, it signalled an end to these divisions, prompted the fall of communism in Eastern Europe, saw the collapse of the Soviet Union, and would eventually lead to the reunification of a then divided Germany.

With a complex social history to draw upon, artists Justus Becker and Imaone took on the daunting task. The mural was curated by Daniel Harris Rosen of the creative agency TokyoDex, and Becker and Imaone were not only asked to create a piece that would reflect the separation of a country, but also one which would call attention to the reunification of East and West. Whereas the Berlin Wall had spurned a slew of fictions about parallel lives on TV and film, the mural encompasses both division and unity.

Ordinarily, Becker (also known as COR) makes large, photo-based murals that are figurative in form and libertarian in cause. By contrast, Imaone is known for spray painting highly stylised, character-based murals on various walls throughout Tokyo. So, how would they combine their artistic styles on the same space?

Stylistically, the finished artwork has separate parts but it comes together with the use of the overarching narrative of an anticipated kiss. Reducing so much into a single gesture is an effective solution. Another visual component that ties the story together is how the segments break apart on one side to merge together with their counterpart on the other. 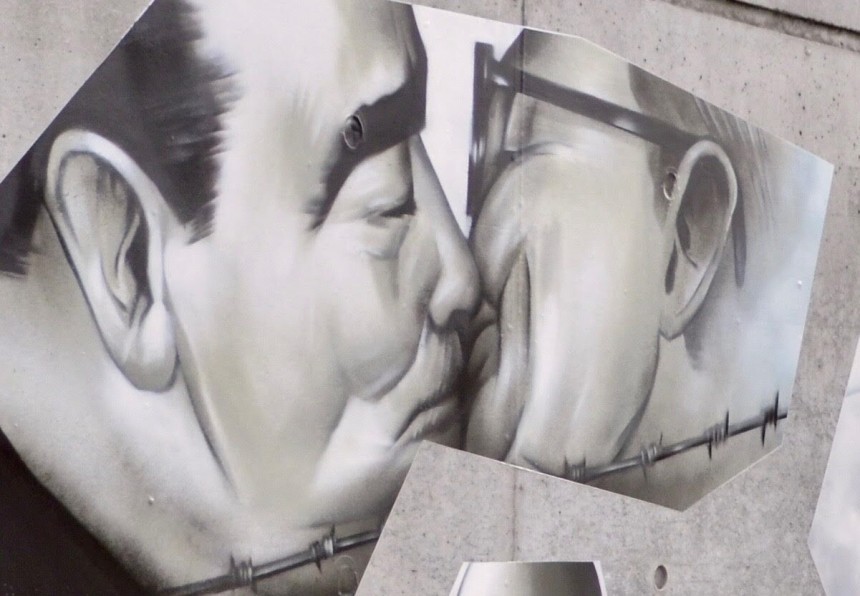 The left-hand side of the mural belongs to Becker’s handiwork. Depicting a character wearing a mask, a number of historical events are summarised on fragments of wall that crumble away beneath. The Brandenburg Gate stands amid signs that celebrate a united fatherland, the space race is shown with astronauts and cosmonauts beside one another, and there is a moment shared between the Soviet leader Leonid Brezhnev and the East Germany President Erich Honecker in what appears to be a passionate kiss on the lips. Despite appearances, this image is based on a fraternal kiss caught on camera in 1979 that remains visible on the Berlin Wall to this day.

On the right-hand side, Imaone depicts the future as blocky, metallic and colourful. His character’s pupils seem to hover in front of their eyes while insect-like icons flutter nearby. It’s a striking vision that solidifies into horizontal slabs before it bends and begins to break up.

Collectively, Becker and Imaone’s mural straddles an ambitious array of issues. Their collaboration has paid off and it sits well here. The past is uphill, the future is around the corner.