A musical smorgasbord from an upcoming chanteuse

“This is like breathing for me; this is my lifework.” Shoko is the kind of artist that assimilates her craft into the core of her state of being, letting it influence and guide her throughout all aspects of life. By weaving dazzling auditory cocoons with strands of shoegaze, indie, drone, electronic and even passing hints of noh, Shoko has become a performing and recording artist who creates truly transcendental material. Her performances are visceral, tunnel-visioned displays of raw emotion and technique that seem to leave emotive embers in their wake. Her live act seems to engulf like quicksand, drawing audience members into an unreal netherworld. 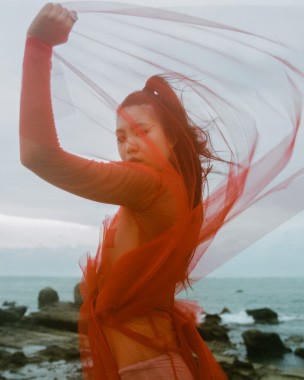 As a child, Shoko grew up around classical music by way of her parents, as well as extended family members, who are professional orchestral musicians. She says that it was frowned upon to listen to any kind of popular music aside from classical for a time, but after the reigns were loosened she enjoyed bands such as The Beatles and U2 before getting into post-punk in her teenage years. The true catalyst that led her to make her own music was finding her aunt’s guitar in a bedroom and realizing she could combine her lifelong love of singing with expression through instrumentation.

Over the years, predominantly male singing methods such as yodeling, opera and khoomi (throat singing) would come to inform the development of Shoko’s unique tone and vocal delivery. Although she has a long list of artistic heroes, she singles out Yayoi Kusama, Ian Curtis and Patti Smith as influential figures in her growth as an artist. When taking in Shoko’s artistic repertoire, there are clear manifestations of Smith’s indelible swagger, Curtis’s brutal honesty and a sort of auditory pointillism reminiscent of Kusama’s work. Shoko explains that her creative process is a fairly straightforward one: “I just sing phrases or make beats at first, then put other sounds on them. These ideas come from my brain naturally. It’s always easy to make some phrases but harder to sort out each sound individually because there are so many.”

Shoko’s self-released SHOKO.Y mixtape opens with a dazed and tantalizing greeting entitled “Fales,” which sounds like it was recorded in a reverb chamber somewhere between the edges of purgatory and the gates of heaven. Her falsetto vocal harmonies drift in and out of two-chord ballads, with acoustic guitar string streaks punctuating her delivery. It’s a gorgeous and psychedelic introduction to an artist who seems to cut through the noise of contemporary music.

“Don’t Take A Kye” is a decidedly more uptempo and bluesy piece that allows Shoko to explore her voice in a lower register, evoking a Daydream Nation-era Kim Gordon performing in a incense-scented whisky bar at 2am. Utilizing MIDI drums and synthesized washes of strings, these well-chosen accompaniments round out Shoko’s vocal and guitar just enough, allowing the song to occupy a perfect space between what might be considered a demo recording and a fully-produced album track. “Same Scenery” is awash with looping pads, cavernous drums and layered vocals that recall a hymn-like confessional. Conversely, the otherworldly “Stone” looks more towards the bleeding edge of 21st century downtempo pop with broken 808 drums, sci-fi synthesizers and a celestial vocal that could trace its lineage back to something Björk might have done in her early career. 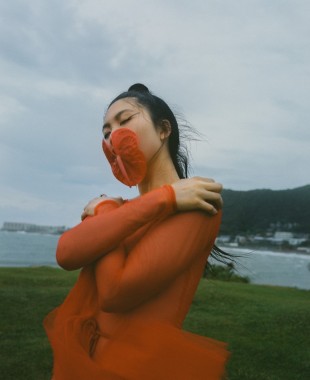 According to Shoko, “‘One Word’ is a song about the stress of miscommunication with people. Usually, I’m making songs with anger or an unbearable feeling in my life when I found them.” She delves deeper into the way songwriting affects her own feelings by explaining, “I think [songs] always make me emotional and this is a really interesting thing. I can be emotional and know what I want to say even if people can’t understand what I’m singing about because of abstract lyrics. I don’t explain a lot about them because I want people to figure out their own answers from each song.”

When considering the current state of affairs in Tokyo’s independent music scene, she has a sobering but overall encouraging take on the plights of upcoming artistic development. “I think there are a lot of unknown independent artists everywhere and they sometimes don’t know what to do after making their own music at home.” She continues, “I’m a little bit sad that there aren’t more performing artists as opposed to people just showing their work online. If they could perform live, these talented people could share their emotions directly with an audience. When I find a really good artist or discover friends who are making amazing music online I always feel like, ‘Just go outside and do your performance.’”

Shoko’s undeniable tenacity for creative expression is infectious and her future is shaping up to consist of continual performances, recording and collaborations. Her new solo material sounds like it will have ethereal elements hardwired into its DNA. “I recorded a few songs in Scotland. We recorded them with natural reverb in a friend’s castle,” she explains. “I was really lucky that I could have a chance like that. I’ll finish mixing in London next month, so finally I can show you guys my songs officially.” Additionally, Shoko is lending her talents on bass and vocals to the band Kuunatic, and on keyboards and vocals to OOKK.