The popularity of sumo tourism programs has increased dramatically over the last decade. While professionals have put massive foreign crowds in Tokyo seats, local teams and amateur stables are struggling just to field enough men to put on a tournament.

Sumo is the world’s oldest continuously-played organized sport. Its modern incarnation, employed today by the Japan Sumo Association, was established in the 17th century, but the athletic tradition comes from time immemorial; supposedly, rituals started over 2,000 years ago and shockingly detailed win-loss records go back centuries.

In a Japan Sports Agency report about which Japanese sports foreign visitors want to experience most during their next trip to the country, 28.5 percent of survey respondents expressed interest in sumo.

Nishiki is a small, picturesque town in Kumamoto Prefecture, just an hour away from Kumamoto City. With a big, barreled chest and a tightly shaved head, Araki’s rugged appearance is immediately betrayed by a sunny disposition and gentle personality.

“It seems there are still places where children’s sumo is organized at village shrines for autumn festivals, but due to the decreasing population of children, the scope of that is declining too,” Araki says.

Even without the population crisis, Japanese children are much more concerned with following in the footsteps of Ichiro Suzuki, the recently retired baseball superstar for the Seattle Mariners, or Shinji Kagawa, a cornerstone player of the Japanese National Soccer Team.

So this begs the question: What makes sumo so much less appealing to these students and why is amateur sumo struggling?

“It’s probably because you do it naked, right?” laughs Toshihiro Agata, a 26-year-old wrestler in the Nishiki Sumo Club and manager for a nearby youth sumo organization. It’s a joke, but one with some serious truth.

Over the last few centuries, what used to be normal and accepted aesthetic and procedural parts of sumo — such as the nudity that Toshihiro mentioned — have become more and more removed from modern Japanese societal norms.

“Sumo is deeply rooted in Japanese tradition for better and worse,” reflects Michael Markofski, an American, and the only local foreigner in the club. Markofski is one of the club’s top contenders and keeps his body tough in the off-season by also playing in a local rugby league.

“Its cultural aspects — the dirt ring, throwing salt before entering — is why my friends back home love seeing it,” he continues. “But it’s also why people are reluctant to participate.”

Other wrestlers in the club gave similar assessments to Markofski.

“Sumo is a religious service,” says Kouji Nakamura, a senior member of the Nishiki sumo community. “The rope that the yokozuna (highest-ranking player) puts on and wraps around himself has the same meaning as those found at Shinto shrines. Therefore, a yokozuna is treated like a kami (god).”

Nakamura, like the rest of the sumo club in Nishiki, takes the sport quite seriously from both physical and spiritual perspectives.

This may be the reason tourists are hankering to see a sumo match and the professional circuit is making a fortune from ticket sales, while small-town and amateur clubs are struggling to maintain membership. 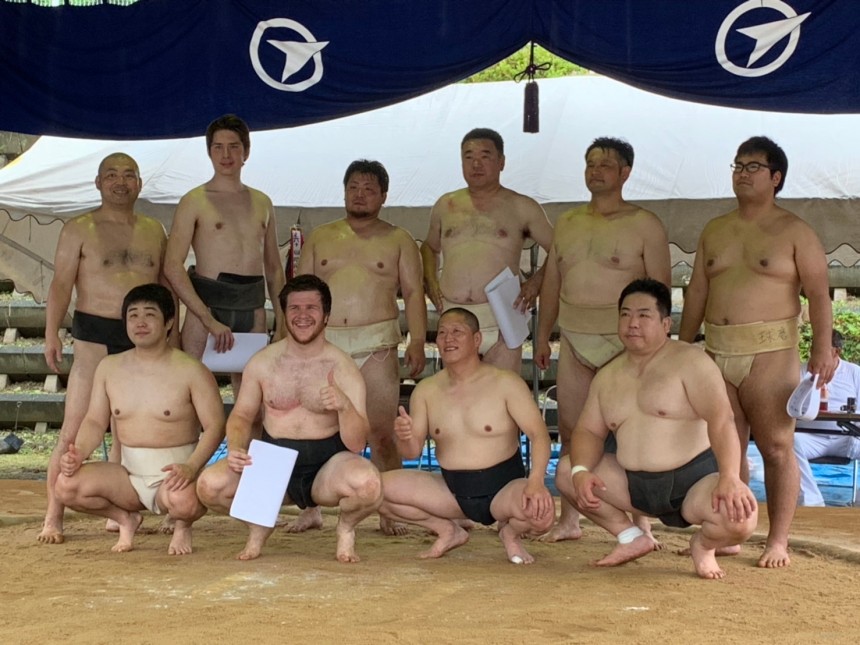 In order to survive and sell tickets, sumo has slowly changed its focus. But for those who are taking the sport seriously and aren’t in a position to make a buck selling tickets to their local matches, it means the mainstream sumo world is leaving them behind.

English commentary of Grand Sumo Tournaments largely lacks any explicit references to the cultural or spiritual gravity of the sport, and many NHK World broadcasts cut the entrance ritual entirely.

“Any sport that carries Shinto traditions will have trouble being popular at the local grassroots and international level since kids and foreigners are more drawn to modern sports,” Markofski affirms.

The Nishiki boys don’t act like a sports team. Nor do they act like a religious or cultural preservation group. Instead, listening to their conversations, one gets the feeling they’re a community organization trying to support their town the best way they know how.

And that service happens to be tossing salt, stomping dirt and throwing each other to the ground in front of a small crowd of their friends, family and neighbors.