Head to the foothills of Fuji for the perfect spring sojourn

The Fujigoko (Fuji Five Lakes) region is a resort area clustered around five historic lakes at the northern foot of Mount Fuji: Kawaguchiko, Saiko, Yamanakako, Shojiko and Motosuko. Of these, Kawaguchiko has by far the most to offer visitors, and is the easiest to access. During the summer months it’s popular as a base for climbers tackling Fuji’s iconic peak, however it also makes an ideal spring destination, thanks to a wealth of attractions and spectacular natural scenery.

The fact that you can’t climb Fuji at this time of year doesn’t mean you can’t admire it. The Five Lakes area is like a giant observation platform for this legendary mountain, with its snow-capped cone casting a constant, genuinely breathtaking figure on the horizon. If you want to get really close you can take a bus to one of the mountain’s 5th stations (about halfway up), but the best views can be found on the northern shores of Kawaguchiko. Be aware that cloudy weather often obscures Fuji from sight, so get up early if you want that perfect snapshot. 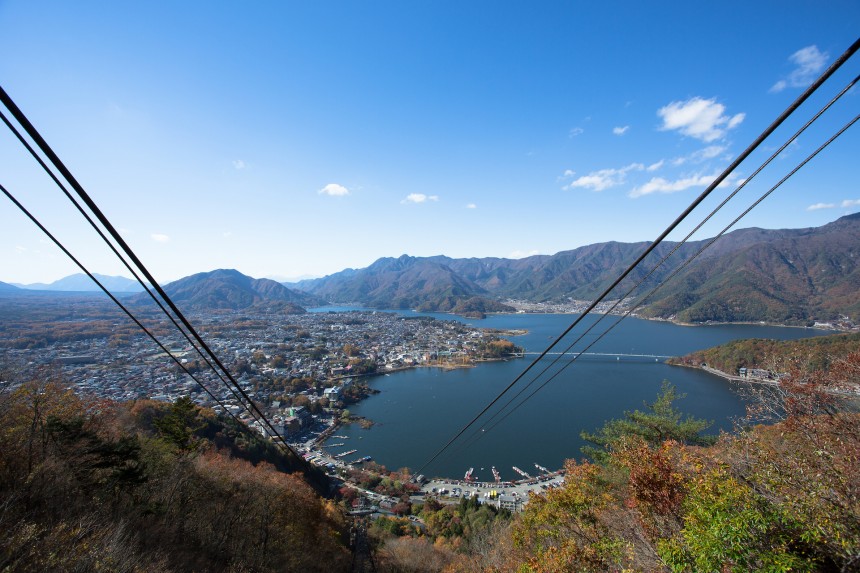 As expected from a lakeside resort, Fujigoko has plenty of outdoor activities on offer, including boating, camping and water sports. Hiking is popular at this time of year, thanks to the mild temperatures, and there are a number of interesting trails to tackle.

One of the most enjoyable and accessible routes leads up Mount Tenjo, on the eastern shore of Kawaguchiko. There’s also a ropeway up to the summit, where you’ll find panoramic views and a tea shop selling special mochi (pounded rice cake) sweets themed after the characters from an old Japanese folk tale that’s set in this area. If you want more of a challenge, continue on to the 1,786m summit of Mount Mitsutoge, after which you can visit one of the many hot spring resorts in the area to relax and recuperate. 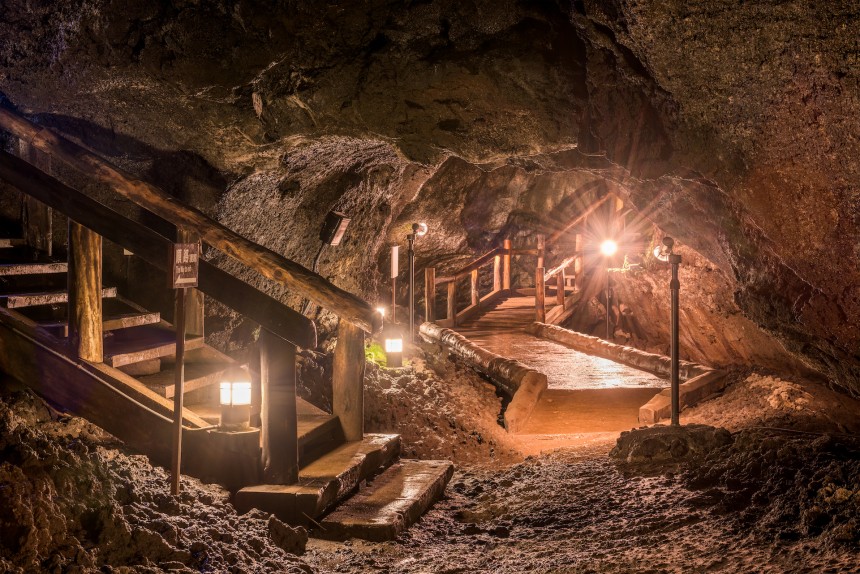 Further west near Lake Saiko, you’ll find three caves — Bat, Ice and Wind — that were created by lava flows from Mount Fuji’s past eruptions and are now open to the public to explore. Hard hats are provided, so just bring your sense of adventure. Close to the caves are some pleasant walking trails running though Aokigahara Jukai, a lush green forest also known as the Sea of Trees. Don’t be discouraged by the forest’s macabre reputation — the paths here are clearly marked, well frequented and beautiful.

If you’re not really the outdoor type, don’t worry. Fujigoko boasts a wide variety of tourist spots, so you’re sure to find something that interests you.

Thrill-seekers and adrenaline junkies should make a beeline for Fuji-Q Highland, a theme park filled with record-breaking roller coasters, including those with the fastest acceleration, steepest drop and most inversions in the world. There’s also a 900-meter-long elaborate haunted hospital attraction and a brand new, high-tech, abandoned mine ride, both of which are guaranteed to get your heart racing. For something a little more educational, stop by one of the numerous museums dotted around Kawaguchiko. From the Itchiku Kubota Art Museum and Gem Museum to the Music Forest and Museum of Art, there’s a surprising range to choose from in this relatively small area.

There are several shrines scattered around the lakes, with two in particular standing out as worthy of a visit. The Arakura Sengen Shrine is home to the stunning five-storied Chureito pagoda. Coupled with the backdrop of Mount Fuji on a clear day and hundreds of blossoming cherry trees in mid-April, this makes for one of the most archetypal images of Japan you can get.

Fujiyoshida Sengen Shrine, on the other hand, has more of a primeval vibe, concealed amid towering trees at the end of an imposing path lined with mossy stone lanterns. It marks the traditional starting point of Mount Fuji’s Yoshida trail, making it an especially interesting location if you’re  thinking of trying the climb on your next visit. 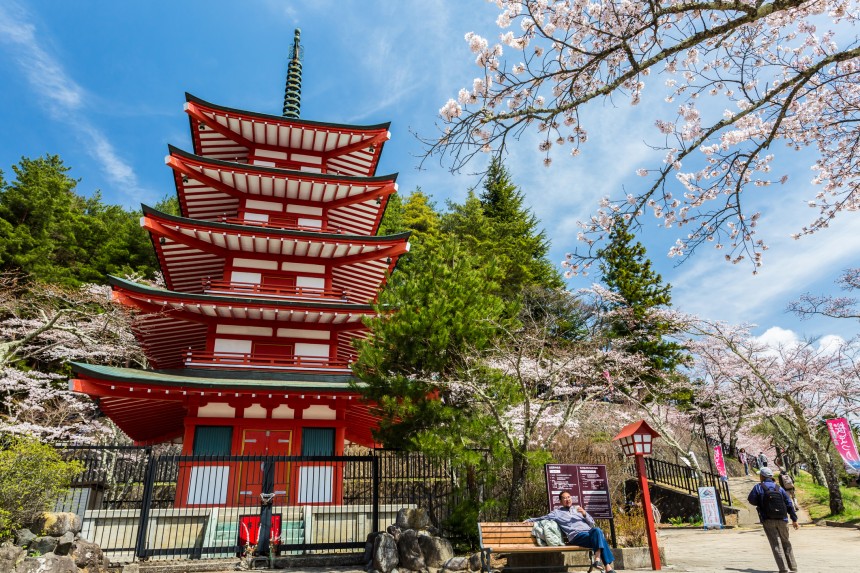 Like most places in Japan, Fujigoko has its own specialty dish that you’ll find proudly served in many local restaurants. Hoto wheat noodles are even thicker than udon, and traditionally served in a miso-based soup topped with seasonal vegetables for a hearty and wholesome meal.

In addition, the purity of the spring water from Mount Fuji is put to good use by local breweries. Drop by Ide Sake Brewery near Kawaguchiko for a tour and tasting, or take the free shuttle bus south to Sylvans microbrewery and restaurant to try their Fujizakura Heights craft beer range. 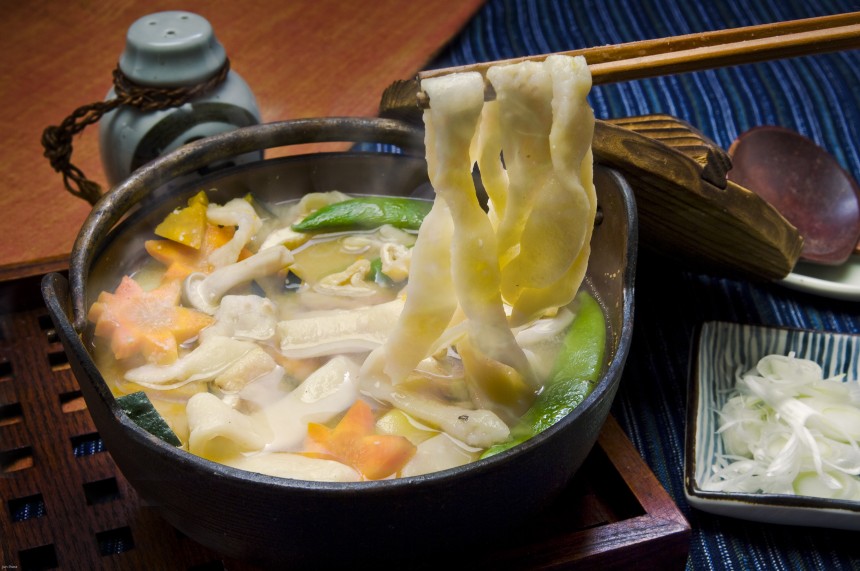 Kawaguchiko Station is accessible from Tokyo in a couple of hours by both train and bus. Once there, hop on one of the three Omni bus routes (blue, red and green) to get between attractions. Two-day unlimited passes are available for ¥1,500. A separate bus runs up to The Fuji Subaru Line 5th Station.