It’s fashion school graduation season in Tokyo: Expect to find the class of 2015 frantically putting the finishing touches on their final collections, braving their first appraisal beyond the walls of their fashion institutions. For most, their graduation exhibition or runway will be the last time they are ever seen as a designer in their own right. Many will go to work for pre-established names as design assistants, patterers and so on. But for the select few who shine, this is where it all begins.

Keep an eye out for the graduation shows from big schools such as Bunka, Esmod and Vantan—and remember, if you’re inspired to walk the path yourself, many of the aforementioned schools now have fashion programs taught in English. 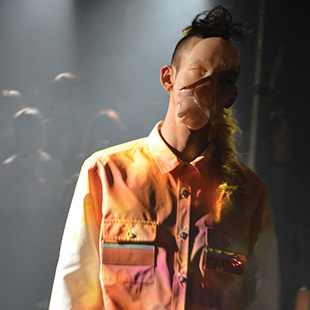 Tokyo Fashion Week might not be until next month, but many of Japan’s more international-focused designers have already shown at Paris and Milan in late January.

The old guard of Tokyo fashion were out in full force. Yohji Yamamoto’s eponymous brand showed that no one understands “ma”—the space between the body and clothes—quite like him. Rei Kawakubo’s Comme des Garçons opts for an exercise in mold-breaking construction, this time dazzling with a technique where conventional garments were constructed in spiraling strips of fabric, leaving even experienced patterers scratching their heads.

Elsewhere, the Tokyo underground was well represented with Tatsuro Horikawa’s brand Julius, whose “Sphere” collection captured hulking silhouettes and a vision of a neo-Tokyo that could have jumped off the pages of a cyberpunk manga. Meanwhile, Masanori Morikawa’s Christian Dada went with a 1970s California vintage-fashion mixtape that looked like it was built for the backstreets of Harajuku—conveniently, where the brand’s flagship is based.

“Avant-garde” is a term thrown around a bit too liberally in fashion, but once in a generation, a designer comes along who personifies it. Yuima Nakazato is one such designer, and though the overall post-gender look may be the toast of the fashion elite, anyone can get behind the technology the fearless designer brings to his self-named brand. In the past, he’s worked with holograms, 3-D-printed panels and laser-cut fur into his designs. But even by his own heady standards, he’s set the bar pretty high in his latest, Spring/Summer 2015, which just hit retail.

Titled “Concrete Jungle Survivor,” the collection takes its calls from the urban landscape of Tokyo rather literally, featuring, as it does, a specially- developed textile made of actual concrete. Beyond the cutting-edge technology that binds stone with cloth, the concrete textile is then given a dose of reality via a coating of graffiti before making its journey to be worn on the streets of Tokyo.

For the intrigued who want to be on the frontline of street fashion, Fake Tokyo in the heart of Shibuya is going to be your best Tokyo stockist.

Win two free tickets to Hamletmachine! The experimental art group OM-2 revives its performance of this postmodernist drama after a decade-long hiatus. Tickets are available for three performances at the Nippori Sunny Hall: March 22 (Thursday) at 7:30pm March 23 (Friday) at…

The Spirits of Fashion

The Here and Now of Tokyo Fashion