A triple-typhoon threat, declining youth population, and weakening interest in Western rock in Japan couldn’t stop the 17th annual Summer Sonic from wrapping up to an epic conclusion in Chiba last Sunday night. The answer to the aforementioned challenges came in the form of Radiohead.

At times, it seemed like the entire weekend festival was a down-bill for Thom Yorke’s indomitably progressive, genre-defying juggernaut. Whether it’s the giant outdoor amphitheater of Fuji Rock or baseball coliseum that is the Chiba Lotte Club’s QVC Marine Field, the band’s moody meanderings seem to breathe and expand in large acoustic spaces in a way they don’t through headphones. 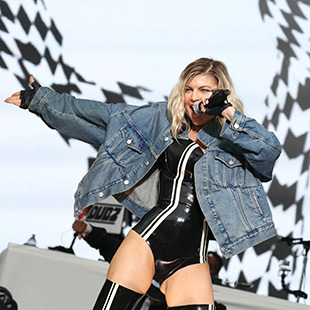 Fergie pumps up the crowd
(©SUMMER SONIC All Rights Reserved)

One of the dozen or so international rock bands that can still pack a 30-thousand-plus stadium, Radiohead led with a five-song sample of their new outing, A Moon Shaped Pool. The orchestral “Burn the Witch” was moderately well received, but it was clear many in the crowd were as yet unfamiliar with the English group’s ninth album, released only two months before Summer Sonic.

Digging deep into their back catalog, Radiohead then proceeded to spark the stadium alight. Sprinkling their set with nods to the domestic crowd in the form of the occasional “dozo,” a self-effacing Yorke, lead guitarist Jonny Greenwood, and the band’s durable rhythm trio pushed the crowd to a cathartic climax with durable paeans to modern alienation including, “The National Anthem” from Kid A and their iconic debut single “Creep.”

With its long hot slogs between Marine Field and the hardened aircraft bunker that is Makuhari Messe convention center, Summer Sonic sometimes demands a lot from its punters for ¥18,000 per day. But over the years promoter Creativeman has softened the punishment with various diversions—ferris wheel and fireworks!—and increasingly ambitious light shows.

Another addition has come in the form of Hostess Club All-Nighter, a Saturday dusk-to-dawn event produced by the eponymous distributor of key rock releases—including A Moon Shaped Pool—and leading independent labels like Beggars. This year’s all-nighter featured sets from J. Mascis’ hoary U.S. indies outfit Dinosaur Jr., showing off their 11th outing Give a Glimpse of What Yer Not, as well as worthy performances from Animal Collective, Savages, Deer Hunter, and British sampling wunderkind Matthew Herbert.

Day one of the Tokyo edition of Summer Sonic had seen sets from the likes of Fergie, At The Drive-In, and Jagga Jazzist, before British techno-pop duo Underworld closed out the proceedings at Marine Field. The duo made their mark in the ’90s with the soundtrack to the film Trainspotters, and have remained ever-popular in Japan, as evinced by their booking for the Budokan in November.

Day two often felt like one long warmup for Radiohead, with an abundance of unabashed nostalgia deep-dives in the shape of sets from The Jacksons, Suede, Mark Ronson, and Flo Rida. But by the time Radiohead had worked their magic and the traditional fireworks display capped the Chiba night, punters could be seen streaming back to Makuhari Station for the long, packed slog back to Tokyo with sated expressions.

Creativeman says over 200,000 people passed through the gates of the festival’s Tokyo and Osaka venues. While that was down about ten percent from 2015, it’s still ample evidence that Summer Sonic will remain Japan’s leading urban rock festival and counterpoint to Fuji Rock’s forest frolic for some time to come.