Bright flavors and slow-cooked meat at this Nakameguro taco bar

Less than a two-minute walk from Nakameguro Station is Tokyo’s newest addition to the Mexican food scene: Taco Fanático. Operated by Global Dining, the first floor riverside restaurant could be described as a taco bar; guests are seated at a counter around a large open kitchen where each taco is made fresh to order. The atmosphere is warm, sociable and relaxed; a flat top grill in the center of the restaurant is the primary focal point. Fresh tortillas cook on one side of the grill while finishing touches are added to a serving of meat on the other. At various stations behind the grill, staff press fresh tortillas and assemble tacos one by one. A skewered block of marinated pork topped with a slab of pineapple slowly rotates on a vertical rotisserie in one corner. Glittering bottles of tequila and mezcal line the orange-lit walls. Space is limited (47 meters, Global Dining’s smallest restaurant), and customers have a front-row seat to all the action.

The menu is composed of 10 tacos presented on four different flavors of corn tortilla (gluten-free), a point which Chef Ricardo Heredia (2014 World Food Championship grand prize winner) says was a compromise. “I didn’t want to alter the tortilla flavors; I’m a corn purist,” he explains. These flavor changes result in different colors of tortillas and an amplification to the visual aspect of the dining experience – perhaps a decision made as part of an effort to capture the attention of diners with an eye for “Instagrammable” meals. The variation in tortilla flavors also results in subtle background flavor changes for each taco, and even if this means the tortillas are “impure,” it does create interest. 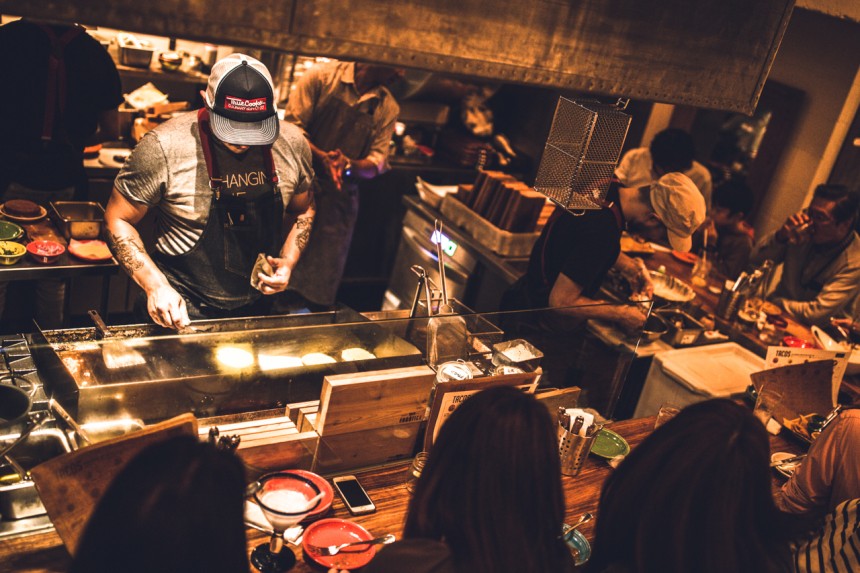 Rich, savory, slow-cooked meats form the base for most of the taco menu. The meats are contrasted with bright, bold toppings. The beef steak taco contains slices of medium-rare hanger steak topped with a fresh salsa verde and a healthy dose of cilantro – a gentle spicy aftertaste may have some guests reaching for a glass of horchata. The Al Pastor taco is composed of marinated pork served on a beet tortilla topped with pineapple – a refreshing balance of sweet and savory. The sole vegan option on the menu is made with seasonal vegetables and a vegan salsa. “That menu item will change along with seasonal ingredients,” explains Chef Heredia, sharing details about flavors. “And our mole takes eight hours to make. Some of the staff were shocked to hear it takes so much time!”

The most obvious “fusion” item on the menu is a tempura shrimp taco (¥350) with chili mayonnaise and avocado on a charcoal tortilla. While the creamy textures are enjoyable against the crispy tempura, the tried-and-true roast meat options are more satisfying. The kakuni pork belly taco (¥350) is a heartier take on fusion – slow cooked pork is served atop a dollop of mashed potatoes – a red onion topping gives the dish some bite.

Other items on the menu are appetizers and salads. The appetizer menu includes many cheese-heavy options and fried items, including the queso fundido, three types of cheese served bubbling hot in a stone bowl alongside fresh tortilla chips (eat while warm). Standards such as chips and salsa, guacamole, jalapeño poppers and cheese nachos are also available. There are three options for dessert: coconut ice cream, Mexican pudding (flan) and gateau chocolat. The flan is topped with a dusting of vanilla bean grounds – it’s a rich, sweet, thick pudding that verges on crème brulee.

On the drinks menu, find a (frozen) margarita with seasonal fruit, a limonada sour (a sour drink with housemade lemonade) and a spicy bloody mary, a cocktail with a “spicy umami” concept (complete with a chili lime salt on the rim). The non-alcoholic options include the Limonada de Jamaica (housemade lemonade paired with hibiscus), fresh grapefruit juice and the aforementioned horchata, which, in a nod to the restaurant’s Japanese location, is made with rice milk. 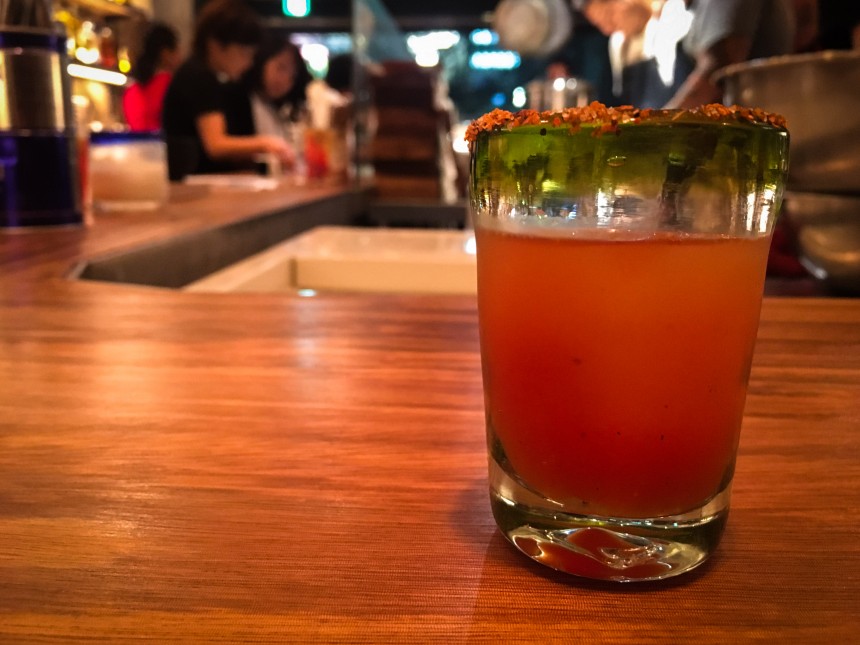 all the seating is at the counter (or standing, behind the counter seats), visiting in groups may be difficult. It makes for an easy location to drop in for a solo bite or for a drink with a friend or two. All visitors should note that the restaurant is Global Dining’s first ever cashless location; all payments are made by card (credit, debit, IC [suica, pasmo, etc.]) or by mobile payment (Nanaco, Apple Pay, Edy, etc.), with other forms of payment planned for inclusion in the future.

Chef Heredia is enthusiastic and optimistic, saying, “in some ways, the team in the kitchen is just learning this kind of food, but I have high hopes once we develop a rhythm for everything.” With late-night availability (open until 2am), a welcoming atmosphere opposite the Meguro River, fresh, well-balanced, quickly prepared tacos, and a world of tequila and mezcal to explore, Taco Fanático offers an introduction to aspects of Mexican cuisine while also providing satisfying, thoughtfully-prepared options differentiated from other Tex-Mex and Mexican restaurants in Tokyo. As each taco is small (two or three bites), guests can comfortably taste several items. Visitors looking for spicy dishes will be disappointed. Expect bright, bold flavors paired with tender meat. 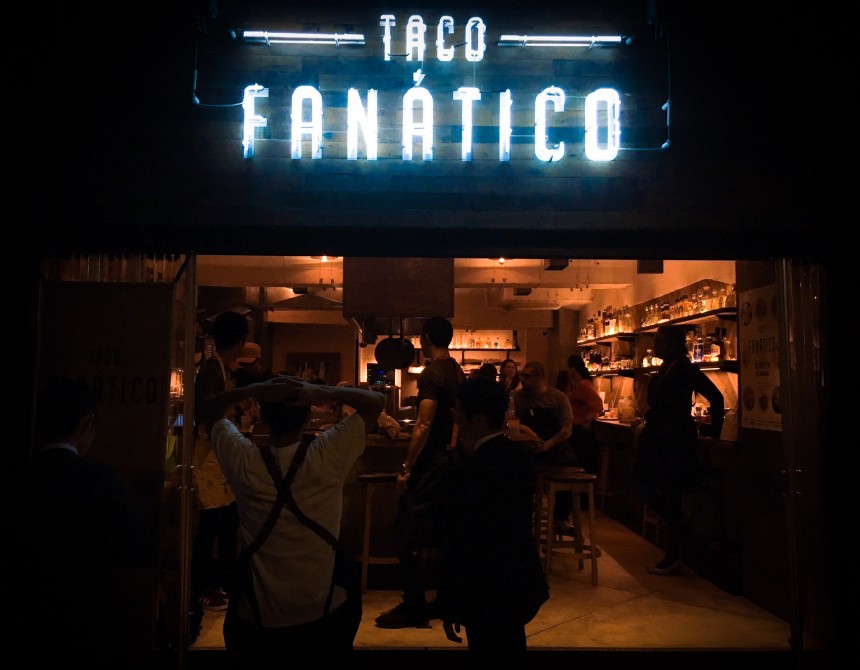 Catch your own fish and let top chefs cook it