It all starts with some soft rock that has a layer of hard rock underneath, and rain. Over the course of thousands or even millions of years, a riverbed will erode that layer of soft rock until it hits the harder stone beneath. Then, over thousands and thousands of years after that, the watercourse steepens until it’s vertical—and the majesty of a waterfall is born.

Experiencing waterfalls in Japan allows you to feel the beauty of nature, get off the beaten trail, and attune yourself to the culture, spirituality, and history all at once. With the borders reopening at long last, Japanese tourists, guides, and even the local government are starting to focus more on this more rural and deeper kind of travel in Japan. And waterfalls are must-visit sites for travelers looking to get back on the trail.

Certain features of Japan’s landscape, either natural or manmade, are instantly synonymous with the country and ever-present: Mountains, cedar forests, shrines, rice fields. These forms surface at every turn of a train ride or a drive through Japan’s countryside, but another one of these features—often overlooked—is the waterfalls, which seem to materialize with every step one takes deeper into the mountain heartland of the country. 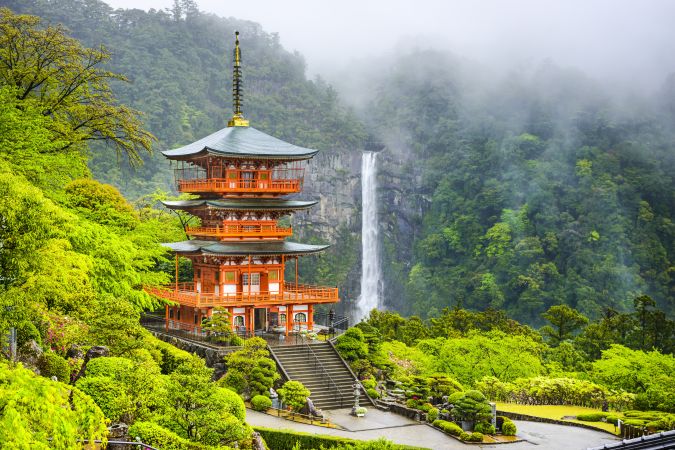 Carved into the Japanese countryside by the steps of ancient Jomon hunter-gatherers, processions of emperors on the sacred pilgrimage to Ise Shrine, feudal daimyo (war lords) visiting the Tokugawa shogun in Edo (the former name of Tokyo), paths chatter with the rush of waterfalls.

The paths on my regular day-hike from Nagoya, now trodden by modern hikers and forest bathers like myself, take me to a completely untouristed station called Kamado on the Chuo line features the seven Ryuugin Falls, which shift from snaking cascades to powering behemoths.

Just an hour further out, old sections of nakasendo, which the daimyo of the rural areas and the Sea of Japan coast used to travel to stay in Edo, remain preserved, largely by chance. In between the charmingly preserved villages of Tsumago-juku and Magome-juku steep paths cross through the woodland landscape, highlighted by teahouses and stores selling chestnut pastries. Down a small hill, in sight and view of this historic trail, two waterfalls batter and surge a small distance apart from each other. Odaki and Medaki, known as the twin male and female waterfalls, simultaneously loud and quiet, magnificent but also a completely ordinary sight on the long trail through the alps to Tokyo.

Encountering chance waterfalls like these always strikes me because it reminds me of the unique geography of Japan as a whole:  That’s right—I’m standing on an island overflowing with water from towering peaks. For me, it’s a way to reconnect with the landscape, with the ground I stand on. Waterfalls also help me connect with distinctly Japanese natural and spiritual phenomena, as they still hold a profound poetic and literary significance. 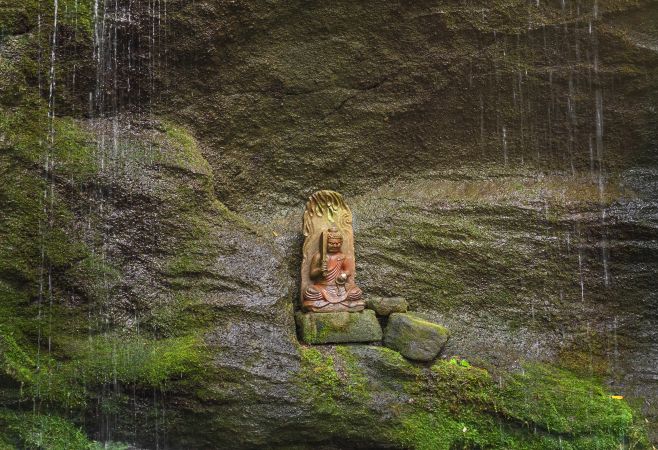 Part of the Nihon-ji Buddhist temple at Nokogiriyama in Chiba

Takigyo, the practice of waterfall meditation, is practiced widely throughout Japan. The objective is to cleanse one’s mind through Buddhist purification rituals, beneath the rough pounding of chilly falls, testing patience and encouraging mental-training and self-discovery. Warriors and ascetic monks have engaged in takigyo since ancient times. Records of the practice even appear in the Kojiki, an early chronicle of myths, legends and hymns, finished as a completed work in the year 712. Waterfalls have also been traditionally used to undergo misogi, or a Shinto ritual of purification by washing the entire body.

They also hold a significant place in Japanese haiku and poetry. Taki (waterfall) is a summer word in haiku because they cool you down in the boiling summer. Famed early 20th century poet Dakotsu Iida in particular wrote a number of renowned haiku about waterfalls. Here’s one particular favorite of mine:

Engaging with waterfalls is a part of what the travel industry is calling “adventure travel,” but it really refers to experiencing nature, history, and culture in depth. For example, walking a historic trail and engaging with the local food, people, and culture rather than traveling by bus tour to all the major sites.

This mode of travel is attractive to travelers in search of a deeper travel experience that moves past superficial sights, but it also brings real benefit to rural communities. The Japan National Tourism Organization provided data based on 2017 USAID research study comparing mass tourism with adventure tourism in Jordan showing that 65 percent of revenue from adventure travel remains in the country, as opposed to just 14 percent of the revenue from mass tourism. As the focus on adventure travel expands, so will awareness of and access to Japan’s beautiful waterfalls.

The best waterfalls in Japan will take you to remote, culture-rich, and beautiful areas of Japan. Here are just a few of the best of the best:

Nachi Falls is a natural and spiritual wonder. It’s the tallest waterfall in Japan, with an uninterrupted drop of 133 meters, born from an evergreen primeval forest. Kumano Nachi Taisha Grand Shrine, one of the holiest shrines in Japan, and one of the sites on the sacred kumano kodo road from Kyoto to Ise Shrine, is nestled in the nearby mountains. Visitors and worshippers can witness the astounding beauty of these falls from up close and below, or from high above at the shrine. The surrounding deep forest of Wakayama Prefecture offers incredible hiking, the scenic seaside and pure white sands of Shirahama Beach, and the rich culture of both Buddhism and Shinto in the sacred heart of Japan. 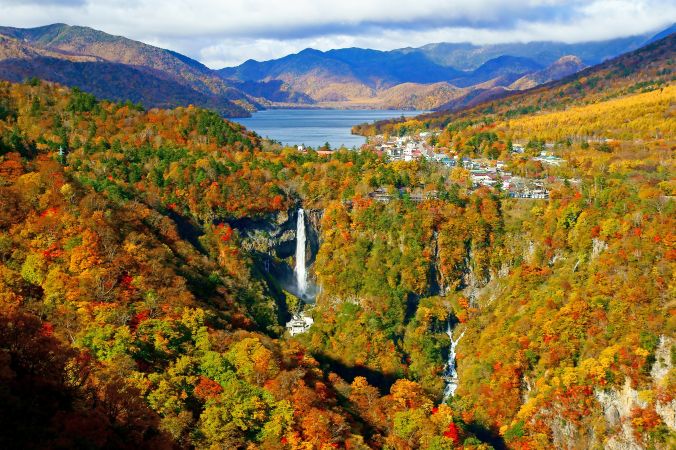 This is another spectacular waterfall, plunging 97 meters off a forested cliff. It’s just a short bus ride from Nikko, a town at the entrance to Nikko National Park and the home of Japan’s most lavishly decorated shrine, the mausoleum of Tokugawa Ieyasu. The local area around Lake Chuzenji features a few other spectacular waterfalls, including the soaring twin cascades of Ryuzu, and another 70 meter fall, Yudaki. It also offers high-altitude cool in the summer among the luxurious early 20th century residences of the British and Italian embassies.

While Nabegataki is not nearly as big as the others on this list, it’s incredibly wide, and startlingly serene. This unique, late-stage waterfall, which took 90,000 years to reach its current form, allows you to walk completely behind it—if you’re willing to get soaked in the process. It’s near the idyllic Kurokawa Onsen in the mountains of Kumamoto Prefecture, not far from the vast caldera of Aso-Kuju National Park.