Crispy on the outside

Despite insects, adverse weather conditions and logistical challenges, eating outdoors just seems to make food taste better. The multi-sensory experience of eating goes into overdrive as we subconsciously attach contextual memories of friends, weekends and warm weather to our grilled prawns and corn on the cob. The art of the barbecue has many variations on the theme throughout the world — in Jamaica it’s jerk chicken cooked in drum barrels, North Carolina has its slowly smoked pork with vinegary BBQ sauce, and in Argentina it’s Asado barbeque with cow carcasses slung to parilla grills, cooked slowly over hot coals. Japan also has its own unique setup and food.

The classic Japanese barbeque is a shichirin, a round, square or rectangular hollow earthen base fitted with a net top. These became popular during the Edo Period as an economical and practical alternative to traditional sunken irori hearths in houses. While shichirin were replaced with gas stoves in homes during the 1950s, they continue to have a place in grill restaurants and barbecue set-ups, as they’re small, lightweight, and impart a prized charcoal-grilled flavor. These days, konro is an umbrella term often used for Japanese barbecues, and encompasses shichirin as well as other portable barbecue varieties like single gas burners and stainless steel tabletop or standing grills.

While gas elements or briquettes are cheap and easy to manage, sumibiyaki (charcoal grilling) is the original method of Japanese barbeque, and still dominates the barbecue scene. The infrared heat emitted by binchotan charcoal cooks the meat on the surface at a high temperature, trapping the umami-rich juices inside. As the heat passes through, the outside becomes crispy while gently cooking the inside. As the juices drip onto the charcoal, the smoky, meaty plumes rise up to infuse the food with a deep, smoky taste.

Barbecues and binchotan charcoal can generally be purchased at homeware stores like Don Quixote and Tokyu Hands, and online at Amazon or Rakuten. 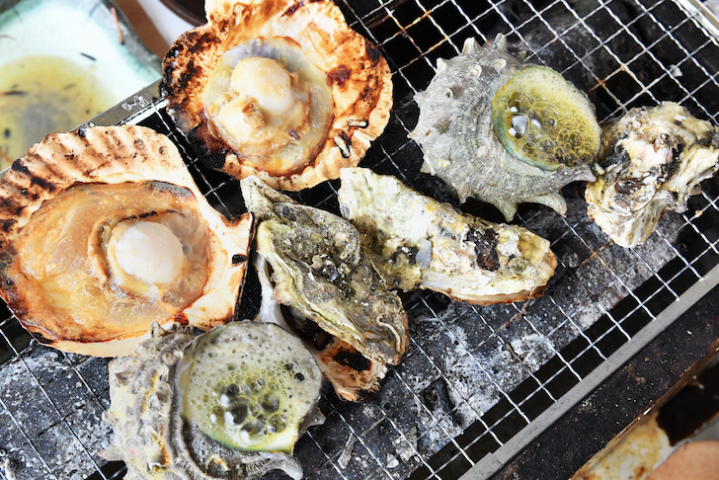 Meat with assorted condiments  – In other countries, it’s popular to marinate meat and seafood in different rich sauces or rubs before grilling. In Japan, it’s more common to cook meat plain. Beef, pork and chicken are the most popular meats. Favorite cuts of beef are harami (skirt steak), cheeks, belly, boneless spare ribs, rosu (sirloin), tongue and offal. Popular pork cuts are spareribs and rosu, and popular chicken cuts include the thighs and wings. Serve grilled meat at a Japanese barbecue with condiments like lemon juice, ponzu, mayonnaise, yuzukosho, wasabi, butter and salt.

Yaki-onigiri – Grill an onigiri on the barbecue until it gets a crispy, chewy exterior. Basting plain or salted onigiri in a little soy sauce, or a mixture of miso paste, mirin, sugar and water or mentsuyu as it cooks is popular. Alternatively, try a DIY rice burger by shaping onigiri into flatter patties, grilling them, then sandwiching in other barbecued ingredients.

Potato with mentaiko mayo – This dish is a yatai favorite, but can easily be recreated in a barbecue setting. Serve grilled or foil-roasted potatoes with a rich sauce of equal parts mayonnaise and mentaiko (cod roe), mixed with a little olive oil and lemon juice.

Soy, sake & butter scallops – Scallops in the shell are relatively easy to buy in Japan from supermarkets. Place them over a grill, add a little sake and butter and, when just about cooked, sprinkle a little soy sauce over them.

Shioyaki-zakana (salt-grilled fish) – Salt-grilling is a classic Japanese preparation technique for fish, where a whole fish is rubbed generously in salt and then grilled over coals. Shioyaki-ayu (sweetfish) are a common sight throughout summer, sold at yatai street food stands and festivals where skewered grilling fish surround pits of coal, ready to be devoured whole straight off the skewer.

Mochi – Mochi (Japanese rice cakes) and barbecue are a match made in heaven. When grilled, they become crispy on the outside and chewy on the inside, and are also a substantial option for vegetarians. 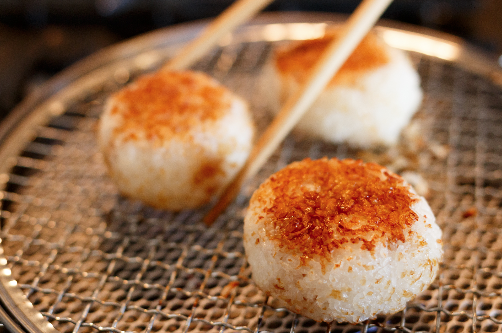 Himono – Himono are Japanese salted and dried fish, a food-preservation custom which goes back to ancient times. These are perfect for barbecuing, as the oily skin becomes crispy and the flesh soft and juicy. Grill skin-side down first, then flip once the flesh changes color a little.

Togarashi & cheese corn – Similar to Mexican elotes, chargrill whole corn cobs, then, just before serving, brush with Kewpie mayonnaise and butter, sprinkle on a heavy-handed amount of powdered or grated parmesan cheese, a dusting of shichimi togarashi, salt and a squeeze of lemon or lime juice.

Fish kama – Kama is the collarbone of a fish, and is generally a meaty, fatty part, so becomes incredibly rich and juicy when barbecued. Hamachi (yellowtail) and tuna kama are easy to get and cheap at supermarkets and fishmongers, and can be grilled with just a little salt and pepper for seasoning.

Foil-wrapped fish and vegetables – Foil-wrapping is a popular cooking technique in Japan, both in the oven and on a stovetop or barbecue grill. Salmon, as well as summer seasonal fish like kisu, karei, mebaru and Japanese mushrooms like shiitake, eringi, shimeji, and enoki, work well as a foil-wrapped parcel combined with butter or olive oil, lemon, pepper and herbs for a succulent parcel.

Tomato-bacon skewers – Known as “tomato beikon kushiyaki” in yakitori joints, these are an easy barbeque number. Take cherry tomatoes, wrap them in bacon, skewer them, sprinkle with a little salt and black pepper, then grill for around 5 minutes.

Yakisoba – This one will need a flat barbque plate but is cheap and cheerful and feeds a crowd. Heat a little fat on the barbecue plate, then add the yakisoba noodles. Saute them a little, then push them to the side. Fry strips of pork belly, then add slices of onions, carrots, peppers and cabbage, meat of your choice, and a sprinkling of tenkasu (tempura crumbs) for a little crunch. Sauté until softened, then mix in with the noodles and yakisoba sauce. Serve as-is, or topped with a little pickled ginger and aonori (powdered seaweed).

Cheese fondue – Cut a round section out of the top of the rind of a wheel of camembert, wrap it in foil, grill until it’s oozy, then grind over some black pepper, add a drizzle of honey, and serve with crusty bread or vegetables and fruit for dipping.

Fruit – Pineapple, mango, peaches and kyoho (Japanese grapes) are all in season over the warmer months in Japan, and can all be thrown onto the barbecue grill. The natural sugars caramelise making them a perfect summertime dessert.