Fuji Rock: An Experience to Behold

Being my first Fuji Rock, I was unaware of the facilities and conveniences that the festival provides. I prepared and packed everything one would need to survive in the wilderness.

Boarding the shinkansen with my oversized backpack and heavy luggage, I was seated with a car full of Fuji Rock regulars, most of whom may have been to the festival over six times. They were fitted out with funky clothes, rubber boots, and a small bag. 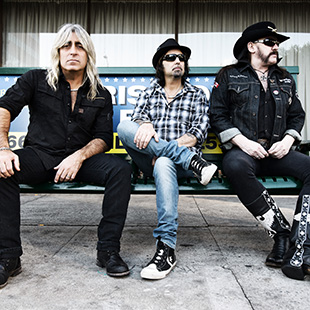 I felt embarrassed, excited, and curious. What brings these fans back year after year?

The reverberations of music bouncing off of the misty mountains made for a mystical first time entrance into the festival. With 13 stages of entertainment to choose from, there is something for everyone. Epic live rock‘n’roll performances, reggae, drum‘n’bass, jazz, world music, ska, drum circles, circus acts, and much much more.

The festival provides a beautiful camping experience. Mind you, the site is quite congested near the entrance with quieter sites further up the mountainside for those willing to endure the hike.

With the high number of attendees, I was impressed at how clean, smooth, and organized everything was. At times the traffic flow became bottlenecked, but with the Japanese ethic of patience in the face of long line-ups, everyone got to where they needed to go.

Motörhead, with experienced frontman Lemmy, brought passion and power to the festival with their heavy uncompromising sound.

Can anything stop Foo Fighters’ lead man Dave Grohl? Certainly not a broken leg. He performed from an elaborate customized throne which included moving lights, a smoke machine, and guitar holsters. During their epic performance, he told stories including an anecdote about how he broke his leg. His comical dialogue had the English-speaking crowd in stitches as his recap of the accident was accompanied by video and pictures, including X-rays. He then displayed sketches of his throne which, thanks to his engineering team, made the entire performance possible.

Taking a break from his throat-shedding primal screams, he walked to stage right in his crutches to have a seat in a more intimate setting, performing some emotionally charged acoustic songs including “There Goes my Hero”, which couldn’t help but remind me of the history that Dave has endured.

Foo Fighters’ performance was very interactive, with Dave often speaking directly to people in the audience and letting them choose what they play next. Overall, their performance was epic, engaging, and emotional.

Confessions of a Fuji Rock Newbie

Going to Fuji Rock as a complete music festival newbie was quite an experience, to say the least. The annual three-day music festival was held this year at Niigata’s Naeba Ski Resort from July 24-26. I attended the second day, which featured headliner Muse, and acts such as deadmau5, Nate Ruess, and Belle and Sebastian, among others.

The first thing that surprised me before I even got to the venue, was the main choice of attire of the festival attendees waiting in line for the shuttle bus at Echigo Yuzawa station. When I picture music festival fashion, I think of flowery headbands and short shorts, but almost everyone heading to Fuji Rock was dressed in hiking gear—if the bus had taken its passengers to the festival’s namesake, Mt. Fuji, instead of the rock festival, everyone would have been dressed for the occasion. 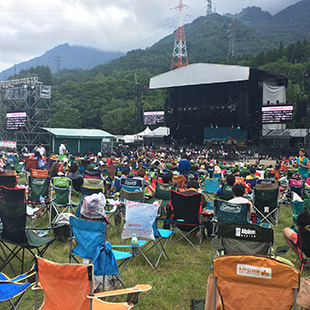 There were also a lot of rain boot-wearers who prepared themselves for the notorious rain that often befalls the festival-goers, although in this regard, this year’s attendees were blessed with good weather.

The choice of hiking gear all made sense when I finally—after a one-and-a-half hour wait to get on the shuttle bus—arrived at Fuji Rock, and found out a lot of walking was to be done.

Naeba Ski Resort’s vast area holds four main music stages, with plenty of interesting spots, like a drum circle tent and “Busker Stop,” where anyone could try their hand at entertaining the Fuji Rock crowd.

Of course, many also chose to set up their chairs in front of the main Green Stage, and stay there for the whole day while they ate, drank, and listened to the many acts that came and go. There really is no one way to enjoy Fuji Rock, which makes the three days seem too short to do it all.

Another fun fact about Fuji Rock is that there are sleeping people—probably alcohol-induced—everywhere. Although many are asleep on camping chairs, some don’t make it in time, and end up sprawled on the side of the path, or anywhere, really. Someone was even sleeping (passed out?) with his legs in the stream flowing through the area, which was always full of people cooling down from the heat. Just goes to show how intense the Fuji Rock experience is!

The musical highlight for me was most definitely Twenty One Pilots, who were just … a great time. The American duo from Columbus, Ohio, comprising singer Tyler Joseph and drummer Josh Dun, performed at Fuji Rock’s White Stage, with songs from their new album Blurryface, as well as past favorites.

At one point, Joseph ran off the stage and onto the top of a trailer parked nearby and, during a performance of “Run and Go”, asked everyone to climb onto the shoulder of the person they were standing next to. Although not everyone took to the challenge, those who did seemed to have all the more fun.

Twenty One Pilots really knew how to entertain, and the Fuji Rock crowd definitely approved. Overheard right after the show ended: “That was legendary.”

Fuji Rock was great fun—great music, great people, and a great vibe. I would definitely go again, and would love to camp out next time.