If music is a big part of your life, you’ve probably imagined your dream music festival at least once or twice. All the bands you’d do anything to see at one ideal location, in your ideal climate, with your closest friends. But as reality sets in, you realize that even if you did pull your favorite acts, there’s still a tonne of other things a festival producer needs to figure out. Food, transportation, accommodation, security, audio equipment and technicians, staging, insurance, and the list goes on. The memory of Fyre Festival lingers too fresh in our minds.

Despite all the challenges that exist in producing the ideal music festival, Yamagata’s Gampeki Music Festival team made it happen. And it wasn’t just the producers that successfully crossed the finish line, they crossed it together with the festival’s neighbors. Gampeki was the first music festival in the rural area of Yamagata, and while many small communities might have had reservations about such a raucous coming to their town, Gampeki received a warm welcome from the locals. “Rapper KID FRESINO was the last act of the day in 2019, and an old guy was watching his performance in tears,” one of the founders, Keitaro Goto, tells Metropolis. “Undoubtedly, he had no idea who the hell KID FRESINO was, but it was such a beautiful moment to see and very rewarding,” he recalls emotionally.

Want to know how they pulled it off? Don’t worry. The festival publicly archived everything they learned so anyone can do the same thing from scratch. Scaling it up or monetizing is not their motivation. Instead, a straightforward reason drove them: rejuvenation of the festival culture.

Goto and Gampeki co-founder, Masaki Ueda, participated in the Harukaze Festival, a renowned free rave event in Yoyogi Park a few years ago, and found it shocking to see how the audience was getting older every year and few younger generations followed. “Although we learned a lot about how to run events, we were the only staff in our twenties. Almost everyone else was over forty and male,” says Ueda. “It’s even the case for Fuji Rock Festival. Expensive tickets exclude people who can’t afford them,” Goto adds, “it’s almost a luxurious activity. We needed information and a place for youth culture.”

Although the festival couldn’t be held during the pandemic, it is returning to its home ground this September for the first time in three years. With “Spectrum” as this year’s theme, the festival welcomes any kind of music fan. “Whether you are into raving and visiting rural places to dance all night, or you are still in the afterglow of summer music festivals, this is a place for everyone,” says Ueda. Rave festival regulars CYK to Korean rapper Omega Sapien—the lineup illustrates the festival’s diversity.

The venue itself, Uriwari Stone Park, symbolizes the festival’s philosophy. Where local miners once broke ground to open a quarry, Gampeki is breaking new ground as a festival and breathing new life into the local community.

Upon the second installment of the Gampeki Music Festival, Metropolis spoke to co-founders Keitaro Goto and Masaki Ueda about this year’s lineup and their goals as a newborn festival. 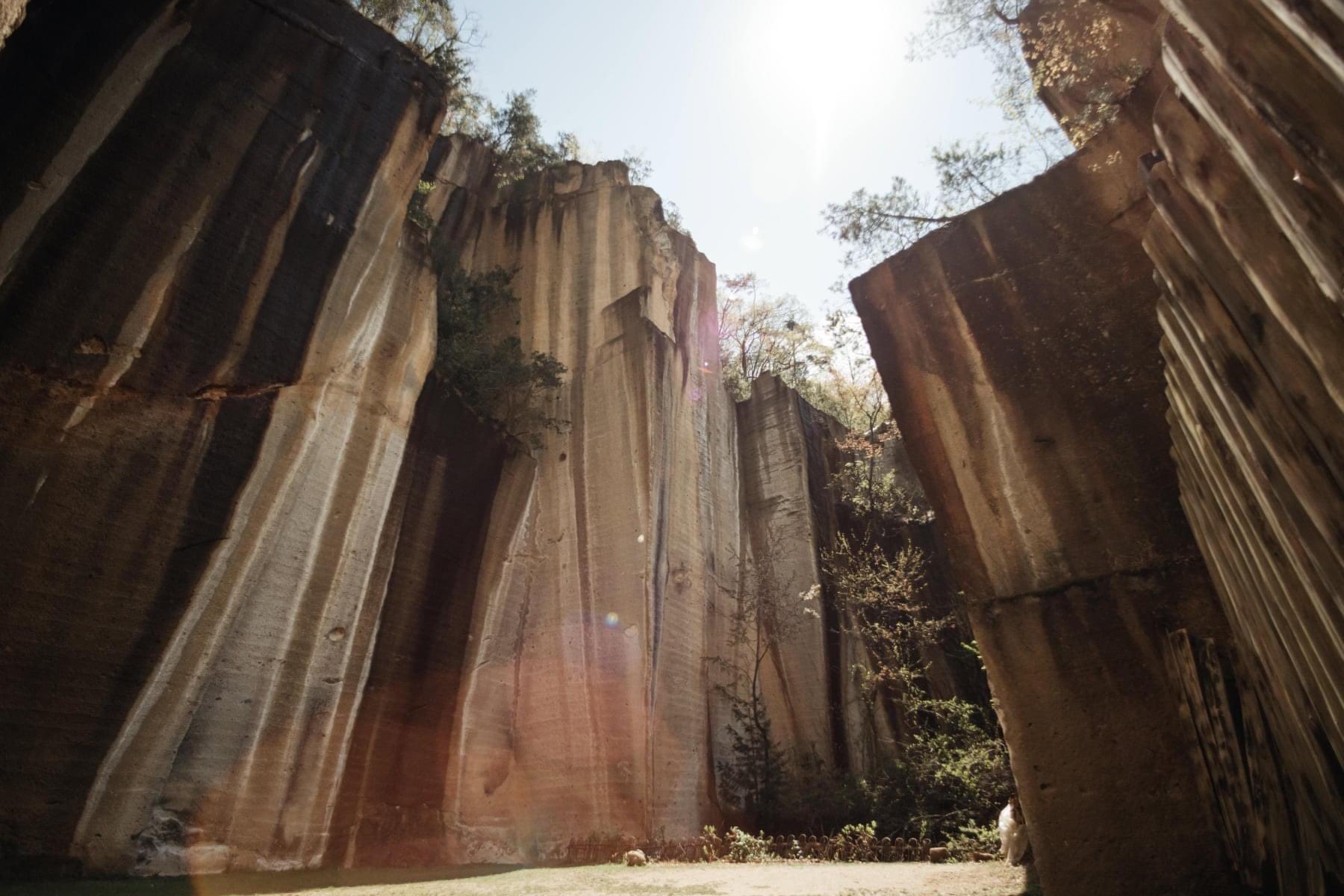 Gampeki Music Festival’s main stage used to be a quarry

Metropolis: How did the Gampeki Music Festival settle in Yamagata?

Keitaro Goto: I moved to Yamagata a few years ago for work. And I often saw local people organizing small rave-esque events for themselves. Since Yamagata has a lot of mountains and nature, it could instantly turn into a rave venue wherever you go with a speaker.

One day, my friends and I drove a small van with a speaker into the middle of the mountain and dove into the river while listening to music. That reminded me of the time I visited my friends in Berlin: taking off my shirt and being a part of nature without realizing a couple of days have passed. I got to do exactly the same thing again in Yamagata. Then I thought, if Yamagata and Berlin are similar, a good music festival can happen here, too. Yamagata also has a solid local music scene, and I met many like-minded people. Then I found out about the venue. Ueda and I used to talk about organizing our own event. These dots started connecting, and we thought this was the place. That was how Gampeki Music Festival came to life.

M: Due to the pandemic, 2020’s Gampeki Music Festival had to be postponed. However, you guys continued to explore possibilities as a festival throughout that period which resulted in alternative events such as “Drive in Ambient” and “Stay in Ambient.” What did you guys learn from this experience?

KT: “Drive in Ambient” was an event where the audience could enjoy ambient music at a parking lot near the mountain of Yamagata. They all stayed in their car with the trunk open so they could feel connected but still socially distanced. We applied the same concept for “Stay in Ambient,” which took place at a hotel instead. Each room played different music.

At the early stages of the pandemic, no one knew what to do or even what was right to do. Many events, which had already been announced before the pandemic, struggled to find the right thing to do. That said, we also knew how many staff were involved in the event industry, and they ended up in a challenging financial situation due to postponed events.

However, each member had their own job, and we didn’t financially depend on the festival, which enabled us to challenge ourselves. When starting out, our aim was to try organizing a festival, build knowledge and meet like-minded people by sharing the know-how we learned from the experience. If that’s our aim, why don’t we try to find alternative ways of creating events during such a difficult time? And everyone else didn’t even know where to start yet. So it felt like the right thing to do. We had freedom in that we didn’t have much to consider, unlike other “proper” festivals. We might have ended up losing some money, but that was it. It all happened quickly, from coming up with this idea to making it happen. Looking back, it was one of our strengths that we are a group of people who genuinely love music and know how to run events. What we did at the beginning of the pandemic suited our initial aim of this festival, too. 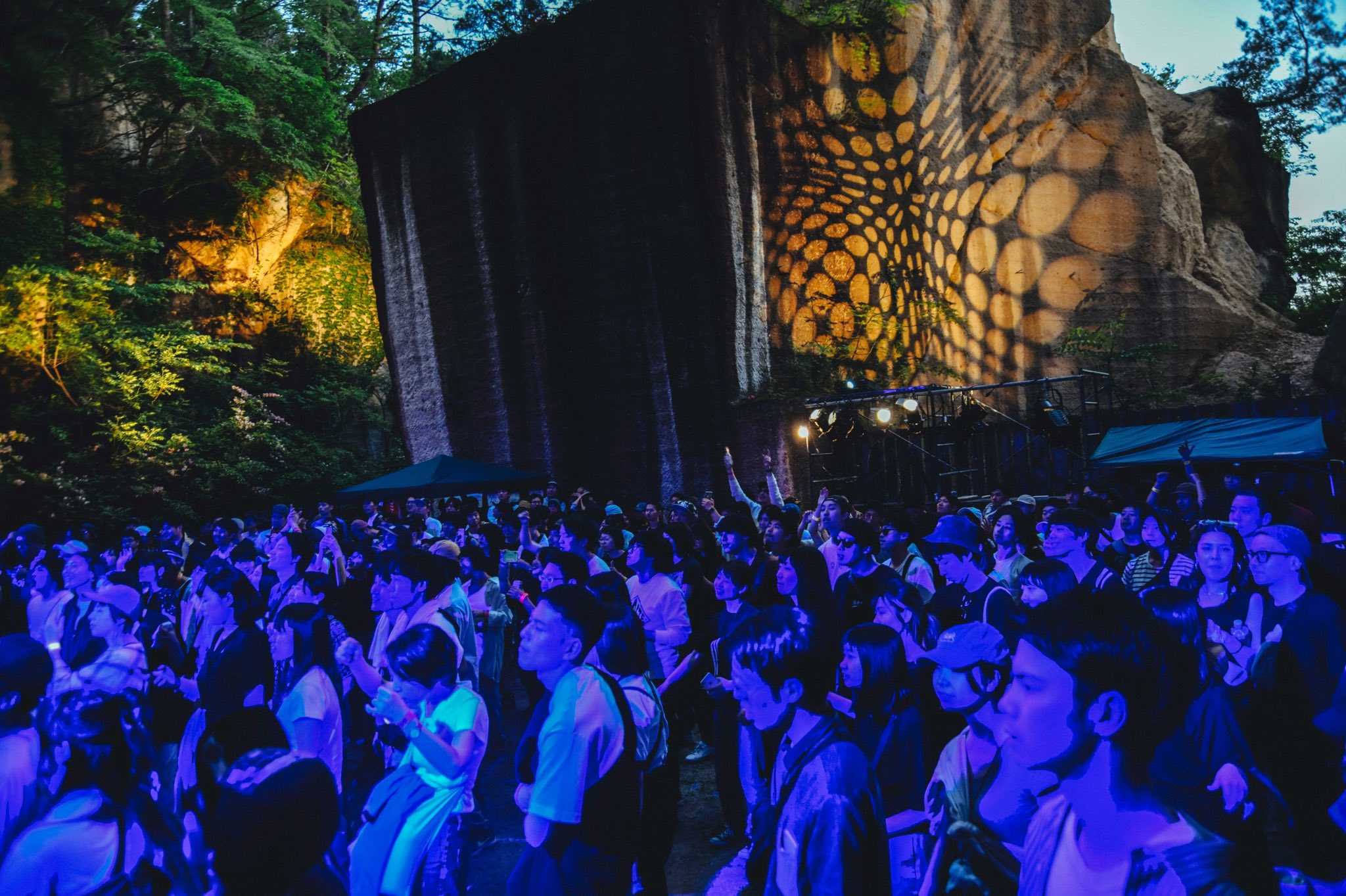 M: Could you tell us about this year’s theme, “Spectrum”?

Masaki Ueda: A lot has happened around music festivals over the past two years while Gampeki Music Festival had to pause. A huge divide emerged between us, and music festivals seemed to symbolize it. Those who chose to attend festivals, those who thought it was wrong, or those who couldn’t even go because they worked at places like hospitals. And now, looking outside the country, there’s a lot of conflict between nations. So our festival is starting over this year, and there would be no better theme than Spectrum to overcome those divisions. We will all be there again for solidarity.

This idea is also reflected in the lineup. We booked some international artists as well as domestic artists. We believe the sense of solidarity between Asian countries is more important than ever. We’re proud that ena mori and Omega Sapien are taking part.

M: How did you guys come to have ena mori and Omega Sapien? Any messages behind this lineup?

KT: When it comes to “international acts,” I think many people still think of western artists. But there are many great artists from Asia who we just don’t know yet. ena mori was the only artist with a Japanese background who was nominated for The 25 best Asian albums of 2020 by NME Asia. So how could we not want to see great artists like her?

Also, it wasn’t easy to know what kind of music young people actually listen to as there’s little ongoing cultural movement at nightclubs or venues. So, we asked our young staff, who are still in their early twenties and thirties. It turns out that K-POP was the only familiar genre of music to listen to regardless of age, generation, and different types of people. And some of our staff were fans of Omega Sapien, who’s from South Korea and has lived in Japan. So we thought he would be a perfect fit.

M:  You can’t talk about the current rave scene without CYK, a young DJ collective, performing at Rainbow Disco Club or nightclubs such as Mitsuki. While ena mori and さらさ (Salasa) are from pop music fields. On top of that, the venue is in a hidden place, which seems to add a rave atmosphere. So this festival seems to blend these two cultures together.

KT: That’s definitely one of the messages we would like to deliver through this festival. We hope our festival will be a gateway for both cultures. Whether you prefer raves or rock festivals, anyone can enjoy what they like and experience the other. Weirdly, Gampeki’s atmosphere is far too welcoming as a rave, and overhearing the strong Yamagata dialect almost seems out of place in such aesthetic surroundings.

MU: The side stage aims to showcase Tohoku’s rave scene, which is another thing we’re proud of. You would expect to hear pop music and walk out of the venue at the end of the day thinking, “it was such a good rave,” or vice versa. There have been many local rave events in Yamagata even before we started. So we never doubted its affinity. Rave events are easy and handy to organize but could also be scary for beginners. On the other hand, it’s not just die-hard music fans who attend music festivals now. That’s why we believe blending these different cultures is possible. It’s young, edgy, and cool but still open to everyone. 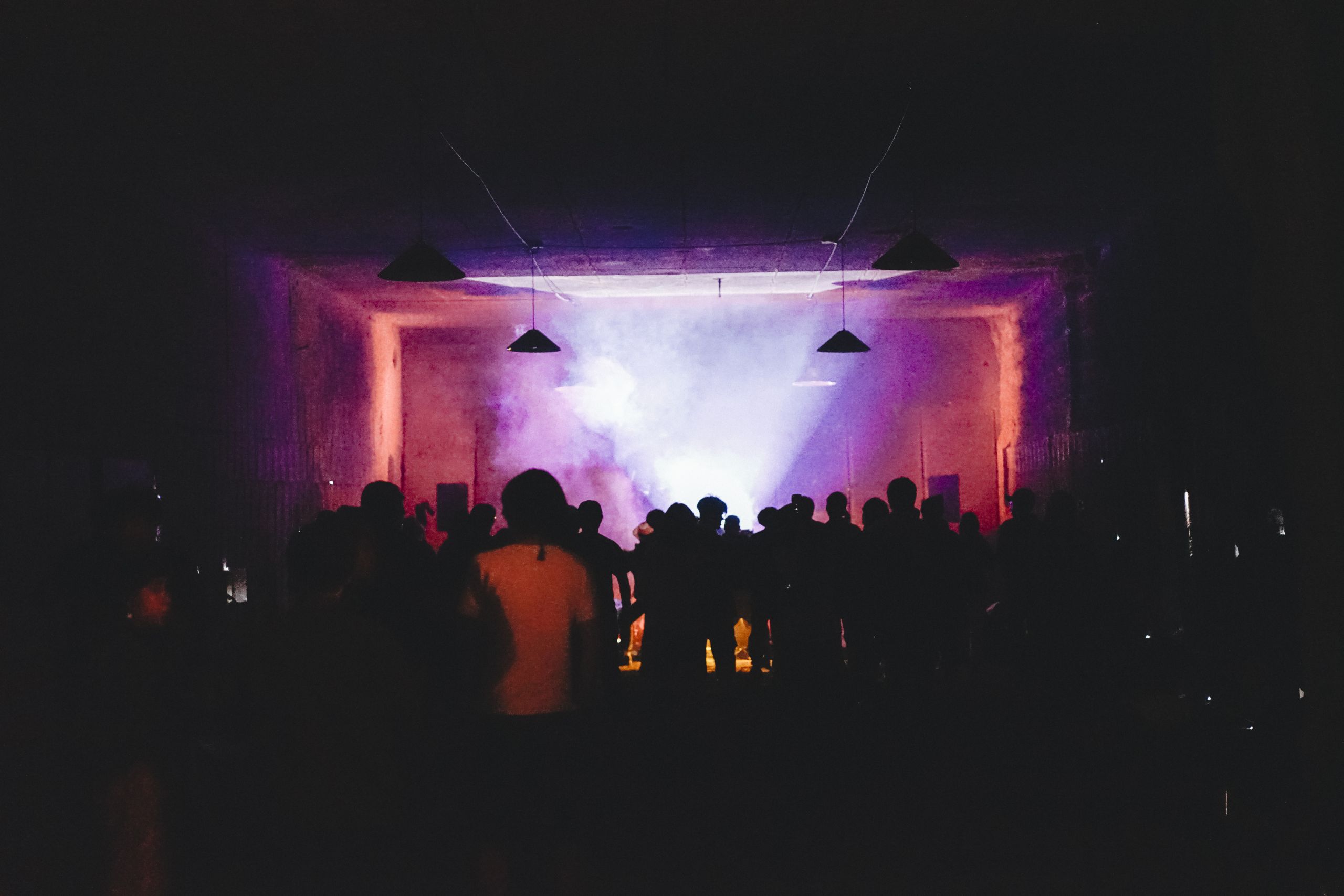 M: What’s next after this festival?

KT: Many local student staff are taking initiative to run the event. And the ratio of gender is well balanced, which I think is good to represent youth culture. I’m pretty sure there’s no festival like ours. I’m proud of that and seeing how university students and local seniors engage with each other through organizing the festival. That said, there are some things to consider as a result of the way the Gampeki community has developed over the years.

MU: It’s hard to be an independent organization and keep everyone on the same page. The original members wanted to create a whole new event and community, which happened to be Gampeki Music Festival. On the other hand, some new staff wanted to participate in this festival rather than resonate with our aim.

Although our initial aim was to subvert festival culture, sometimes it feels like we are getting on the other side. By its third time, you would know almost everything you need to build a festival. And after that, it’s just repeating. But, admittedly, we are getting into the next phase as a community, both in a good and bad way. And we’re facing new issues caused by that.

On top of that, we are a non-profit, so making enough money to keep going is also a challenge. Not everyone takes financial responsibility, so the level of risk each takes is different. We’re thinking of what we can do after this year, and the Gampeki Music festival may not be forever. So please don’t miss out on the great lineup we’re proud of this year! 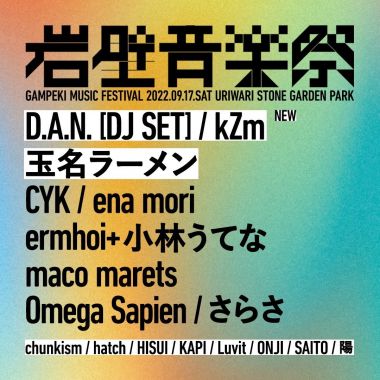