A guide to some of Tokyo’s most unusual eateries 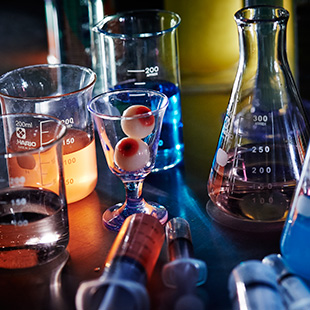 Would you like your drink with eyes?
(Photo courtesy of Haunted Restaurant)

If spooky is your thing, take a trip to Haunted Restaurant, a ghost-themed restaurant located just three minutes from JR Hachioji Station.

The premise is that you’re visiting a haunted mansion inhabited with friendly ghosts who love to entertain guests—so be prepared to expect the unexpected.

There’s also an alcoholic all-you-can-drink option (¥1,200), and for an extra ¥300, you can even order as many of Haunted’s original cocktails as you want. These fun cocktails come served in syringes, test tubes, and beakers, making the drinking experience that much more exciting. The creatively-named “Saiketsu Shokoratie” (“Blood-gathering Chocolatier”) and “Kansen Deadwalker” (“Infectious Deadwalker”) cocktails (¥750) come with a Godiva chocolate cocktail and berry cocktail in syringes, which you must then pour onto a beaker of marshmallows and cotton candy, respectively.

Food options include french fries, fried chicken, pasta, beef stew, and more dishes that can be shared by many.

As the unbearably hot Japanese summer begins, Haunted Restaurant might be the perfect place to cool down in an entertaining, shiver-inducing atmosphere. 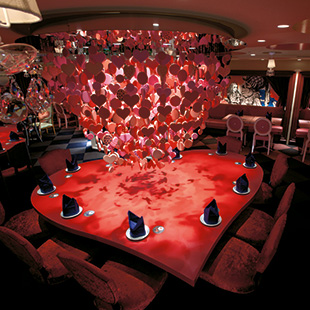 Mad enough for the Hatter
(Alice in a Labyrinth, Ginza)

At one point or another, we’ve all probably read or seen Alice in Wonderland. Lewis Carroll’s weird and quirky story, which Disney has adapted into both an animated musical and a live-action film, has captured the imaginations of many children around the world. But who would’ve ever thought that one day, they would be able to have dinner with Alice and her friends—at least outside of Disneyland?

Alice’s Fantasy Restaurant, as the name suggests, is a small chain of Alice in Wonderland-themed eateries with five locations around Tokyo—along with one in Osaka and another in Nagoya—each with its own Alice-inspired twist.

The restaurants are decorated with extravagant chandeliers, bright colors, giant playing cards, hearts, and a variety of artwork from the film. Waitresses dressed as Alice, as well as waiters in tuxedos, will guide the visitor through a strange world, which in Ginza includes a giant teacup and large book-shaped doors.

With prices ranging from ¥2,500 to ¥4,500, the restaurant won’t leave a huge dent in one’s wallet, and it’s well worth the money for those who love the story.

The menus, which come replete with pop-up pictures, contain all kinds of interesting food. Every meal, such as the spaghetti ragù resembling the grinny Cheshire, has some bit of the theme to it. Many of their cocktails and drinks are also based on characters from the story, such as the “The Queen of Hearts,” “The Cards Soldier,” and “The Cheshire Cat.”

Due to the popularity of each restaurant, the chances of getting a table are improved with a reservation, which can be made online. 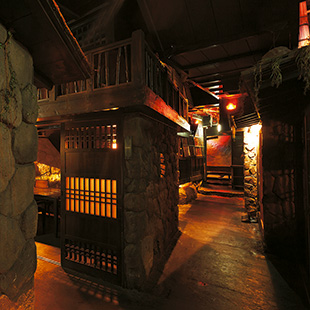 Looks like the ninja business isn’t doing so well—they’re part-timing as waiters. Ninja Akasaka is the only restaurant where the feudal mercenaries will serve guests food. This shogun-themed restaurant was designed to resemble a Japanese castle, and ninjas guide diners through small corridors, narrow passageways, waterfalls, bridges, and secret doorways to show them to their tables. The dimly-lit hallways create an eerie ambience, making patrons feel like they’re being pursued.

When seated, make sure to keep both eyes open. Ninjas will sneak up on guests when they least expect it, to take orders, check up, or to hand over the check. It’s definitely not the type of place to dine and dash, except for those who want to be pursued by highly-trained assassins.

Don’t be surprised if ninja magicians perform card and coin tricks during dinner. These performances are sure to leave dining companions entertained while enjoying their meal.

The menu, presented in the form of a scroll, contains many peculiar ninja-themed foods like the shuriken (throwing stars) grissini, the ninja-style cream puff, and the ninja-style roast lamb with Korean flavoring. The peculiar dishes are found in the many large courses on offer, including the Shinobi Course (¥6,800), the Yamato Spirit Course (¥7,000), and the Hanzo Course (¥10,000).

Ninja Akasaka is well-known by many, especially among foreigners living in Japan. In fact, 40 percent of their customers are foreign, and so they also serve different types of food from France, Italy, and China, alongside along their Japanese fare.

Although a bit pricey, with dinners costing anywhere from ¥10,000 to ¥15,000, it’s all worth it if for those who want a one-of-a-kind ninja experience. 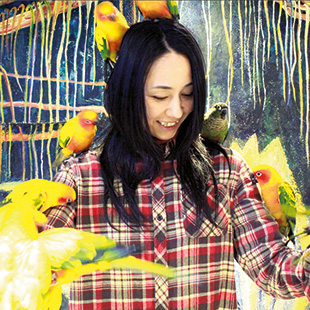 It’s usually considered rude to stare at someone while they eat, but does the same thing apply to birds?

Tori no Iru Café is an avian-themed café that’s home to a large variety of birds from around the world. In Japanese, the name literally translates to “a café where there are birds.” According to their website, Tori no Iru Café has 30 different types of exotic birds, including parrots, parakeets, owls, and hawks.

Most of the birds inside the café aren’t free to fly around, but there is a parrot room where customers can go in and interact with some of the birds. It costs ¥1,500 per hour, and those who want to stay longer can do so for an additional ¥300 per 15 minutes. As a sanitary precaution for both the customers and the birds, everyone must apply hand sanitizer before interacting with the feathered staff. For protection from bird bombers, rain ponchos are also a must before entering.

While Tori no Iru Café encourages its patrons to enjoy their visit, safety is still their number one priority. Guests should watch their step, not bring valuable jewelry into the room with the birds, and avoid flash photography. When interacting with the birds of prey, it is dangerous and strictly forbidden to poke the birds around their face. Moreover, it’s important to be gentle with these birds and to slowly stroke their back from the neck down.

Tori no Iru Café has two locations, one near Kiba Station in Koto and the other in Taito near Asakusa Station, and it’s a great place to go for those on a budget. Priced between ¥500 and ¥1,100, everything on the menu is fairly inexpensive. 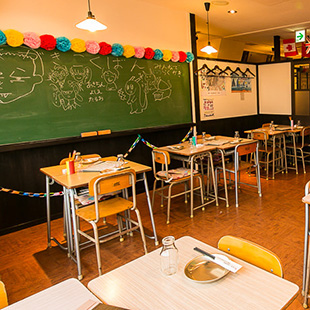 Catering to those who want to relive their childhoods and simultaneously get absolutely wasted, 6-Nen 4-Kumi (“Sixth Grade, Group Four”) is a national chain of izakayas that are themed after Japanese elementary schools.

While many Tokyo establishments are merely “inspired” by their themes, this quirky bar is wholly dedicated to its motif.

The entrance reveals a stack of shoe racks where, in actual schools, students would change out of their outdoor shoes and don either sneakers or slippers. Nearby, there are stacks of randoseru (backpacks)—an elementary school necessity—and cute yellow caps, should patrons desire a drunken photo op worthy of flagging on Facebook as inappropriate.

The staff, dressed as school nurses and P.E. and math teachers, guide guests down hallways past drinking rooms, each with their own vibe: some are classrooms and music rooms; others cafeterias and the principal’s office. Every room comes with its own paraphernalia, be it school supplies, chalkboards, music instruments, or toys. In lieu of guest books, the bar is equipped with school notebooks for visitors to write comments or draw pictures of clouds and sunflowers—or of no-no body parts.

The food selection comprises cafeteria staples and Japanese kid-favorites, such as Napolitan spaghetti, omelet rice, and onigiri—many of which are served with little flags, in colorful plastic trays and containers. Among the desserts is the “oppai ice,” an ice cream served in a balloon with the tip snipped off, making the whole eating process rather suggestive—though this apparently used to be a common after-school treat.

The drinks menu is extensive with over a hundred offerings, including highballs incorporating “Gari Gari-kun” popsicles, alcohol-infused fruit milkshakes, and espresso cocktails. But the star of the menu is the “Rika no Obenkyo” (“chemistry studies”), a mix-it-yourself set with fruit liqueurs in test tubes. The drinks, just like the food, aren’t anything to write home about, taste-wise; but it’s all about the novelty here.

For the Japan-raised, 6-Nen is a trip down memory lane. For those that pursued primary education elsewhere, this bar is simply a trip. 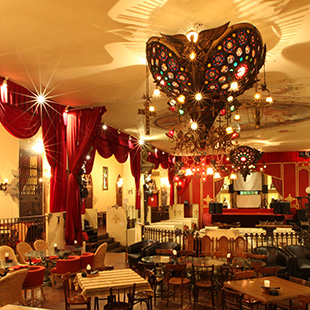 This ain’t no church
(Photo courtesy of Christon Café)

Shinjuku is no stranger to the quirky, the offbeat, and the downright bizarre. From its eighth-floor base, Christon Café overlooks all the madness sprawled throughout Yasukuni Dori—all the while reinforcing the street’s oddities.

Located a short stroll from Kabukicho, Christon Café is a gothic restaurant with an interior that resembles that of a (highly glammed-up) cathedral with a touch of Renaissance-era Europe. Religious effects and symbols fill the space, ranging from statues of saints to crosses hanging from chandeliers; which the establishment balances out with gargoyles and medieval knights.

That Christon occasionally hosts bondage and S&M parties should indicate that it serves not as an ode to religion or spirituality, but rather caters to the gothic and Lolita demographic that’s widespread in Japan. And also those who want to break free from the monotony of family restaurants.

The dining area on the main floor is spacious and often lively with chatter and the clinking of utensils, but privacy can also be had in the secluded booths on the semi-dimly-lit second level.

Much like the décor, the menu is on the diverse side as well, with delicious pizzas, pastas, tacos, and salads; as well as an array of Hungarian, Japanese, and French meat dishes—because there has to be blood somewhere.

The desserts are where things get creative, with options bearing such names as the “Megami no Ice Brulée” (“The Goddess’ Ice Cream Brulée”), “Tenshi ga Kononda Tiramisu” (“The Tiramisu Favored by Angels”), “Shikkoku no Yuwaku” (“Jet-black Temptation”), and “Shukufuku—Iyesu no Yakiin” (“Blessing: The Mark of Jesus”)—which is a cheesecake shaped as a cross. Sounds about right.

Christon’s original cocktails are the highlight, and appear to all be designed to sate the sweet-toothed. Of these, the Rose & Mix cocktail—which comes garnished with a rosebud and an LED-lit ice cube—and the Deathscyth Hell—a dark, bloody red—are the only truly gothic drinks on the list. However, the rest of the drinks selection is bountiful, offering up spirits aplenty.

While Christon Café’s theme is on the extravagant side, the vibe is notably relaxed and sets the tone for an evening of mingling, romance, or discussing safe words.