The Story of Ginger

From the Southeast Asian tropics to the plates of Japan

A soft pink hill of pickled ginger, often nestled beside a green plastic leaf, is as signature to traditional Japanese cuisine as are the small seafood-topped pillows of rice it accompanies—sushi.

Both the mature, brown-skinned ginger root shōga and the tender, pink-skinned young root shin-shōga are common in Japanese cuisine, chopped and grated into a wide variety of marinades and dishes from pork shōgayaki to chicken meatballs. Ginger is also an important ingredient in many types of tsukemono (Japanese pickles), from the pink, vinegar-pickled ginger gari eaten to cleanse the palate between different types of sushi, to beni shōga, a bright red ginger pickle that often sits on top of everyday dishes like yakisoba, okonomiyaki and curry rice. 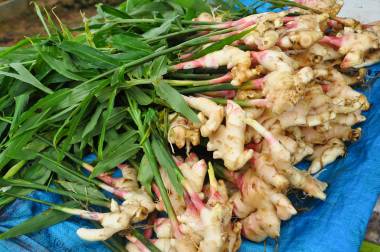 Not many would guess that this knobbly, aromatic root had to cross continents and take help from monks to become such an indispensable part of the Japanese food landscape.

While the history of sushi reaches over a millennium backwards, the cultivation and use of ginger is even more ancient. As a species, it is thought to originate from the tropics of Southeast Asia, where the lantern-like flowers of its wild relatives brighten up the steamy forests. Botanically, it belongs to the vast family of Zingiberales, to which cardamom, galangal, turmeric and other familiar culinary species also belong. Even bananas and plantains are distant relatives to ginger. Ginger also has a botanical cousin called myōga with mildly ginger-flavored, soft purple flower buds that are used in cooking. The buds can be barbequed on skewers, or sliced thinly and served as a fragrant garnish in foods.

But of all these, the humble ginger may have the longest history in human cultivation. Not only is it unknown in the wild, ginger can also—unlike its relatives—only be cultivated by dividing the root and not by growing it from seeds. Archaeological finds from settlements of the early inhabitants of India and China indicate that they cultivated and used ginger as long as 7,000 years ago.

The first written records of ginger appear in China some two and a half millennia ago. These early texts are said to be written by Shennong, “Divine Farmer”, who is recognized as the father of traditional Chinese medicine. In order to evaluate herbs and describe their suitability as remedies, he is said to have tasted tens of different herbs daily. He miraculously survived the process to author the legendary Shennong Bencao Jing, the first book about herbal medicine in China. In it, ginger is noted for its healing properties—a strengthening herb that is capable of maintaining health and wellbeing. 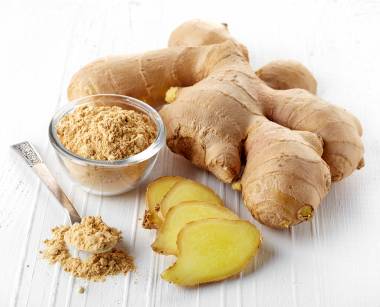 One Chinese proverb goes, “food and medicine share the same roots.” Ginger’s medicinal qualities added another advantage to using the spicy and aromatic root. It became a staple in Chinese cuisine, prepared and consumed in a remarkable number of ways: ginger wine and ginger-flavored tea; honeyed ginger, chopped or grated in sauces and marinades; and even as pickled condiment. The great Chinese philosopher and teacher Confucius himself demanded that ginger was never to be removed from the table during his every meal.

Ginger arrived on the shores of Japan from China and Korea during the early first millennium, when cultural contacts between the countries brought knowledge of Chinese traditional medicine and use of herbs for healing. Later, during the Nara Period (710-794 CE), as Buddhism spread throughout the islands, Chinese traditional medicine went hand-in-hand with its teachings. Buddhist monks used herbal medicine to treat locals while teaching them about Buddha—an excellent way to create respect, spread knowledge and gather followers for both fields.

When ginger found its way to Japanese food plates is uncertain, but its connection to medicine prevailed. To this day, herbs and vegetables that are used to garnish Japanese foods are called yakumi, which means “condiment” but also “medicinal flavor.” The word is thought to have derived from the herb-filled mixtures used since ancient times by practitioners of Chinese medicine. An ideal yakumi garnish is not just pretty to look at but also good for the health, a combination for which ginger may be the poster child.

Nowadays, ginger drinks are common home remedies used year-round. Shōgayu is a ginger tea with a soothingly soupy consistency used as a home remedy to treat the common cold, as the spicy root is believed to warm up the body in chilly weather. During the humid summers, a sweet, cold ginger drink called hiyashiame is thought to help with tiredness caused by the heat. Another sweet treat is candied ginger, shōga no sato zuke that is sometimes taken against travel and morning sickness—or just as a fast pick-me-up on the road.

With such a significant role to play on the culinary and home remedy scene, it is no surprise that ginger features even in other areas of Japanese culture. Anime fans can follow the long-published Inuyasha manga series by Rumiko Takahashi, where the prickly Shōga has a side role as an old female insect demon who is engaged to the aptly named Myōga. Shōga chases her unwilling fiancé across the country, trying to make him settle down and marry her.

The spiritually inclined may also be interested in Shōga Matsuri, or Ginger Root Festivals, that are held every September—for example, at the Shiba Daijingu Shrine in central Tokyo, and at Ninomiya Shrine in Akiruno. During the festivals, portable mikoshi shrines are carried around in order to honor Shinto gods, and open-air stalls are filled with fresh ginger roots, with stall-holders shouting “protects against evils” or “if you eat ginger, you’ll be free from colds” to festival-goers and potential customers—a perfect combination of religious devotion and herbal medicine merged together.

So next time, while picking at the tiny pink hill of pickled ginger beside your sushi, spare a thought for the long journey the humble root took, from the steamy tropics of Southeast Asia across the continent, over the sea in the medicine trunks of Buddhist monks, to becoming an indispensable part of both Japanese cuisine and culture.