Not too far from any station center, big or small, an unassuming kebab shop lies with quiet anticipation, ready to feed the hungry and the exhausted at any moment of the day. Whether you’ve tied off one-too-many of those izakaya beers before the last train rears its sobering head, or you’ve got naught but a 500 yen coin in your pocket, nothing dulls the hunger and soaks up the suds with the efficiency of your local kebab sandwich.

Filled to the brim with spit-roasted, well-spiced chicken or beef — lamb if you’re really lucky — with cabbage and tomato layered in for textural variety, the kebab’s existence as an antagonist to traditional Japanese cuisine is exactly what has driven its frequency. Or maybe, it’s just ‘cuz they’re really good. As foreign as your Mcdonald’s Big Mac — though at the same price point and significantly healthier — I’ve come to ask who exactly are the workers behind this Tokyo kebab paradise?

As I set up my recording contraptions surrounded by kaleidoscopic mosaic lamps, Vural graciously sets down a glass of cranberry juice for me with a smile on his face. We’re in Vural’s shop: Koenji’s Lale Turkish Restaurant And Bar.

It’s a cozy Turkish foodery as warm as its owner and named after the Turkish word for tulip, “a famous flower found all over my home country,” says Vural. I thank him for the rare refreshment — cranberry juice is not an often-found beverage in Tokyo — and lament that more people, including myself, haven’t taken advantage of the beautiful dining room of his fine establishment.

“I was able to renovate about two years ago. Customers can eat, drink and have fun here every day,” he explains. But Vural admits that about 70 to 80 percent of his business comes straight through the kebab stand window. These renovations came after 10 years of hard work in Japan, and unfortunately, couldn’t have finished at a worse time, with COVID-19 dissolving the chances of having more dine-in customers.

“I have one or two staff that sometimes help, but I’m generally working every single day,” Vural says without a trace of disheartenment. Having been a customer of his for nearly half his tenure in Japan, I can vouch for that statement — Vural was the only one I have ever been served by whenever I dropped by Lale. Some kebab shops do find enough success to expand, like the locally famous Star Kebab — which serves Middle Eastern delights to kebab otaku at three different locations in the city. However, that sort of expansion bittersweetly requires the constant man[1]hours on the part of Vural and the multitudes of other hard workers.

Vural is chipper and assures me that he has plenty of time to visit cafes and different restaurants. “And yes, of course, I get eight hours of sleep a day,” he laughs. So why here, where the total population of Turkish people in Japan is 6,087 (as of June 2021) — that’s approximately 0.004% of Japan’s entire population? Why not America or a European country a bit closer to Turkey? Vural explains that there are pocket communities of Turkish immigrants who breathe life into many of these shops — something of a relief when you consider that these shops are often small and isolated.

“I came to Japan because I could,” says Vural, “after being a chef my whole life in Turkey. These are generally the same as kebabs you’d find at home; I don’t alter the recipes for local tastes. I’ve been cooking this way all my life, after all.” He recommends the Iskender Plate by the way.

While never compromising his Turkish origins, he has learned to speak Japanese pretty well entirely through self-study, and back-and-forthing with his customers over the last decade. He’s even picked up survival English over the past decade too, from serving the many drunken or otherwise curious Westerners roaming the rowdy streets of Koenji.

In all that time, Vural has been home only twice. I ask where he finds his motivation and the simple reply “nothing in particular” slips his lips with a wry smile. “It’s just what I have to do.” Though he doesn’t have a wife or kids yet, he does have parents who are back home in Turkey. Due to the price of airline tickets, they are still unable to visit him. Although COVID-19 further reduced the likelihood for international residents to reunite with their families, the beautiful remodeling, new part-time help and mobile take-out boom have left Vural in a hopeful position for the future.

Moral of the story? Always support your local kebab spot. Here are a few of our favorites around Tokyo: 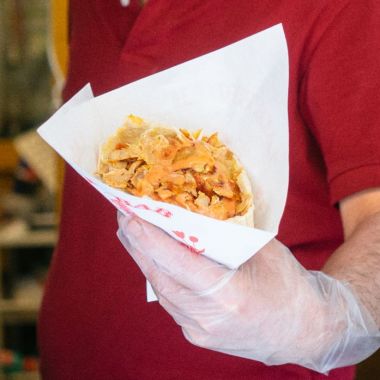 Star Kebab
The lskender Sandwich, comes on French bread in both beef and chicken.
All around Akihabara

Asian Dining MEALS
The standard chicken kebab sandwich, they do them big and delicious.
6-16-9 Nishishijuku, Shinjuku-ku

Lale: Turkish Restaurant & Bar
The chicken kebab wrap on the go, the Iskender Plate if you’re dining in.
3-22-2 Koenjikita, Suginami-ku

Curry & Naan
The chicken kebab naan ‘sand.’ Not all locations have these, but kebab-style chicken in naan bread is a revolution.
All over Tokyo