Okonomiyaki, bread and vintage galore in the post-earthquake shotengai

Located in the Togoshi district of Shinagawa and fed by two separate train lines, Togoshi Ginza is stitched into the seams of the city. There’s more than just a humming energy about this place, there’s an air of authenticity that beats through the streets. Home to decades-old specialized shops and a wonderfully working-class food scene, it’s an area that knows its worth to the heritage of downtown Tokyo.

The main shopping street, spanning a length of 1.3 kilometres, is far from modern. Cut in half by the rails of the Ikegami Line, without neon lights, loud advertising, and with miraculously buried cables instead of Tokyo’s usual tangle of overhead wires, Togoshi Ginza has managed to retain a classic Japanese shopping district atmosphere without any pretence. And it’s popular. There’s so many people packed into this sliver of a street on a Saturday that it makes you wonder how you’ve been left out of the secret for so long. 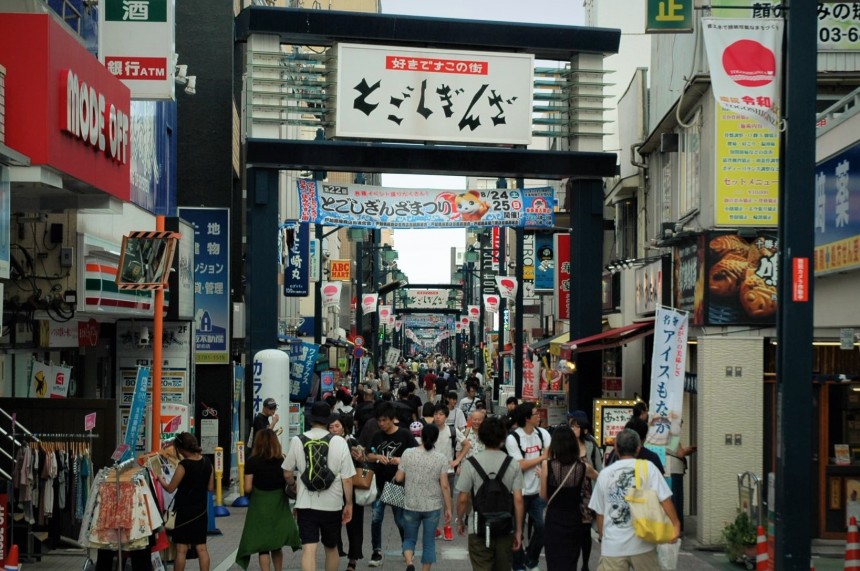 After the Great Kanto Earthquake of 1923, Togoshi Ginza found itself at the heart of a new project to stimulate trade in the wake of the devastation, with merchants setting up shop close to the manufacturing district of Osaki. The following years saw the opening of Togoshi Ginza Station, which in turn, served as an anchor point for more businesses to base themselves around.

The name “Ginza” is in fact a post-earthquake addition. Being built on a slope meant the area was historically plagued with bad drainage and flooding. Taking advantage of the quake, locals lugged bricks left from the ruined buildings of Ginza and used them to line the street. Along with the building materials, they also added the name “Ginza” to Togoshi in the hope it would bring the commercial success of the bricks’ hometown.

It worked and Togoshi Ginza prospered as an area that the served hard-working locals with amenities and food. While the bursting of the bubble economy in the 90s but pressure on this previously thriving neighborhood, through a combination of clever planning and marketing the district has done more than just survive in recent years. 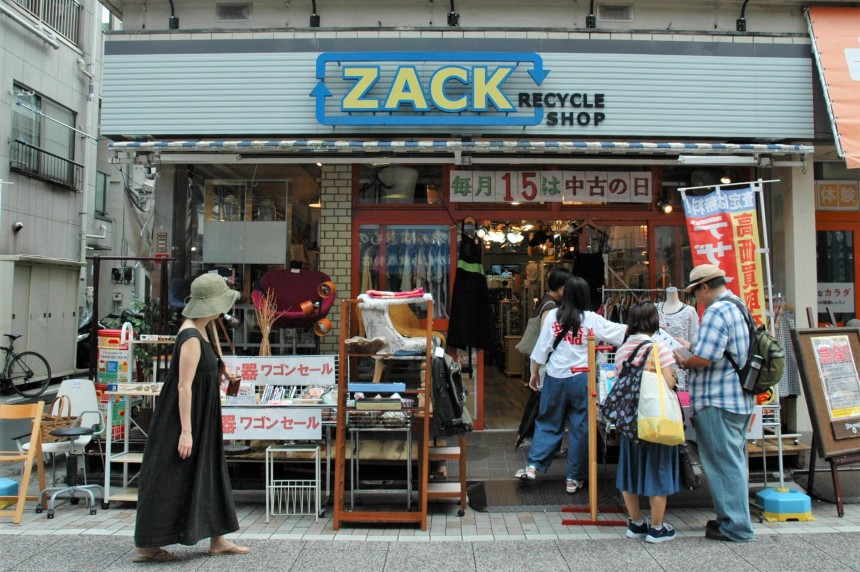 Togoshi Ginza has seen something of a resurgence in recent years. Some have flocked to the district’s chic Showa era shotengai (traditional japanese shopping arcade), while others are drawn to live here long-term for its good transport connections, parks and quality of life. The area’s continuing success is immediately apparent. Walk the brimming streets, cross the bisecting Daini-Kaihin Expressway, and enter a world of undiscovered eateries and an unpretentious treasure trove of independent stores.

One of the numerous eating options in the area of note is Okonomiyaki Yū (お好み焼き 遊), an unfussy grass-roots teppan shop. Don’t let the rough-around-the-edges aesthetic of this place fool you. Sit yourself down on one of the heavy wooden chairs, gaze at the walls plastered with peeling posters, adverts for products from bygone eras, and prepare yourself for a treat. The Hiroshima-style okonomiyaki (Japanese savory pancake) is served up steaming with a deep, rich taste, but the omusoba is the star. This fresh, fluffy yellow omelette wrapped around thick, succulent soba slathered in sauce is so good it’ll make you wish you ordered two. 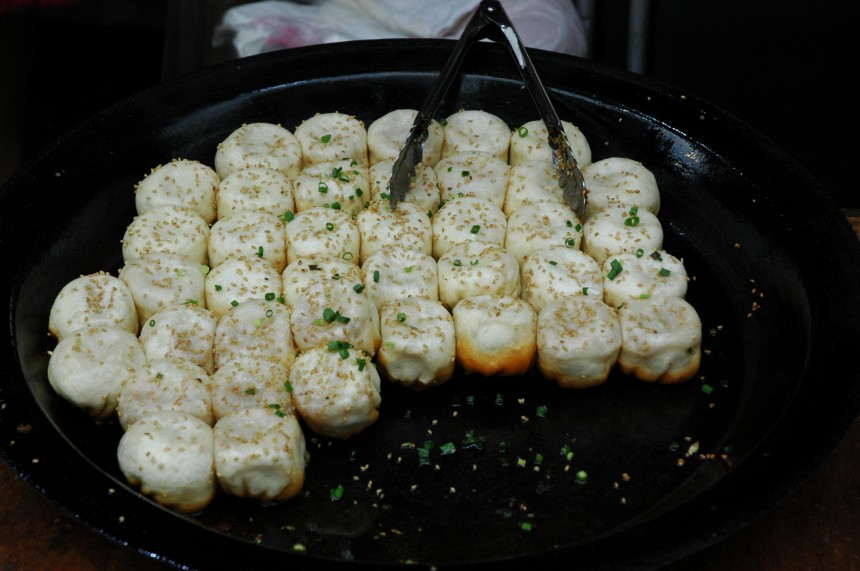 Bakeries play no small part in the array of fresh snacks on offer in the area, but the tiny Beicon is easily overlooked. All the products here are made with 100 precent rice flour, everything from chiffon cakes to plain bread. This doesn’t just make them gluten-free, it makes them unbelievably delicious: soft, bouncy and chewy. The baguette, with a slight mochi moistness to it, offers so much more depth of flavour and texture than any of its more european competitors. The warm, chatty staff complement the homemade quality of the bread on offer here.

After all of the eating and strolling along the shotengai, take a side-step to the solitude of the nearby Togoshi Hachiman Shrine. Located down a quiet backstreet, the unassuming centuries-old shrine grounds provides an unexpected place of relaxation and contemplation. With sofas set around the grounds, tables of tea, small snacks and books to flick through, it’s a family-friendly place to sit under the shade of the trees and reflect on the shifting world around you.

Fans of vintage will enjoy popping in and out of the selection of second hand shops that dot the district. Without the air of being carefully curated, the thrift store finds lack the price tag that comes with many other vintage shops in the city. Instead there’s often a simple selection of used kimonos, handbags, curious clocks and cute crockery: Zack Togoshi, for instance, is the perfect spot for unearthing hidden gems. For something a little more ordered, but in the same vintage vein, visit Seo Shouten. This polished shop of curiosities stocks new and upcycled items you never thought you needed but suddenly do; you can even pick up wood and fittings for your own DIY projects. 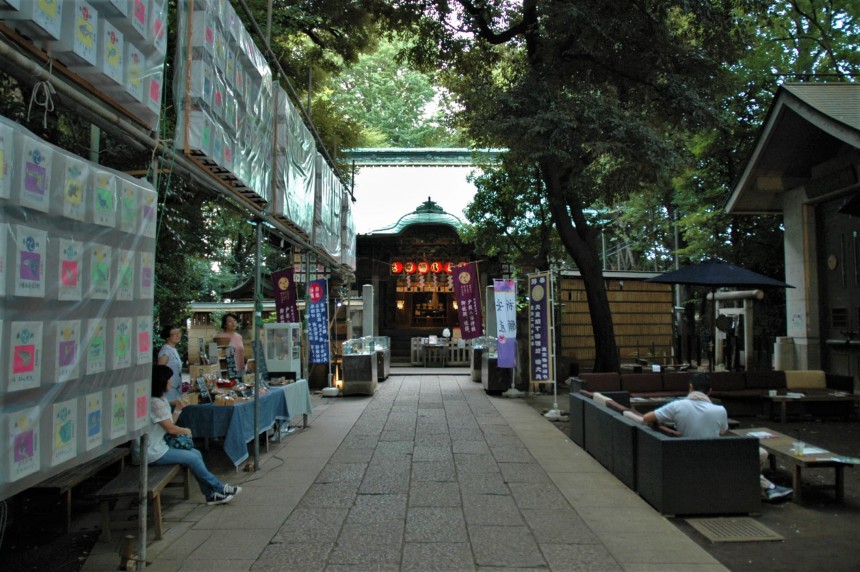 When it comes to specialization, however, it’s the lovely old lady selling traditional footwear that wins the prize. Inside her dark, tiny shop, Japanese slippers (zōri) and wooden sandals (geta) patiently await their customers. It’s a wonder how long she must have sat in her shop and seen the changing face of the world, but the statement of famous signatures on the walls speaks volumes about its fame. It’s one of many old-fashioned shops that remain open for business on this storied shopping street, alongside long-established korokke (croquette) stalls and unagi (grilled eel) vendors.

At first Togoshi Ginza doesn’t seem much different from any local area in Tokyo. The downtown neighborhood trickles along with a steady stream of people just like many others. But as the symphonic background music tinkles over the public address system, and the shopping street stretches out into the distance, Togoshi Ginza remains, and it’s magic takes over.