Okonomiyaki for the Soul

“Are you sure this is the right place?” inquired my skeptical companion. She wasn’t alone in her doubt; despite having followed the GPS to the dot, I was nearly convinced that my phone had led us astray from our dinner plans. 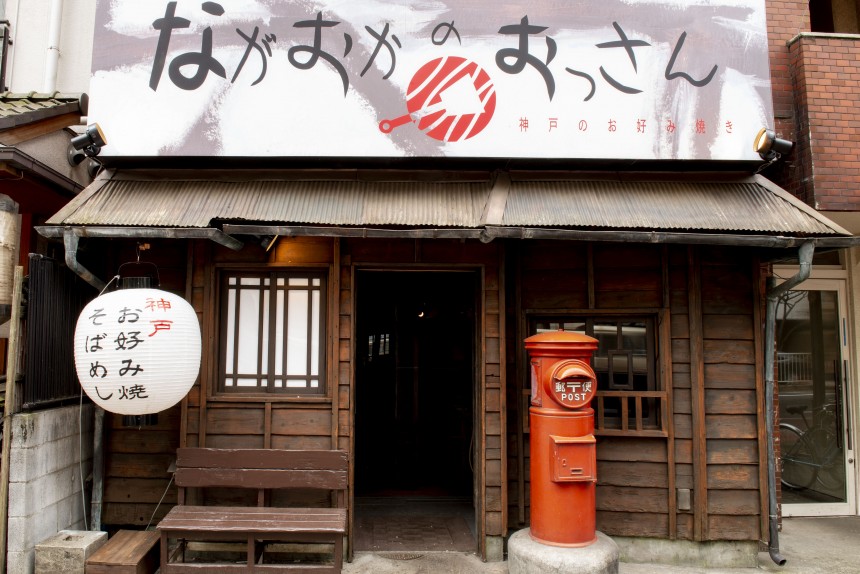 We’re at the outskirts of the Hiroo neighborhood, where the end of the street greets Ebisu district, on the hunt for a new teppanyaki (iron griddle-fried cuisine) restaurant which opened in the chic locale last week. In front of us stands a short, dingy shack with opaque windows and rusted sheets lining the walls of the edifice. It’s not the first place you would imagine for a grand restaurant opening, but if the sign plastered across the veneer is any indication, we’ve arrived at our destination. Peering through the thin film of dust which had settled onto the sign, you can faintly make out the lettering ‘Nagaoka no Osan’, or Uncle Nagaoka.

Indeed, Nagaoka no Osan appears as though it’s seen better days. However, upon stepping across the threshold, the sight which welcomed us was anything but shabby; designed by Hungarian artist Sándor Zelenák, the interior features an intriguing mix of post-World War II Showa era nostalgia and abstract modernism. In between rustic wooden beams, the dark mahogany walls serve as a backdrop to a handful of expressive, almost calligraphic, monochromatic artworks, giving a contemporary panache to the otherwise homely restaurant. In the back, away from the countertop facing the main stage, guests may choose to dine in a private six-seater room overlooking the Shibuya River. And amidst this visual collision of cultural styles is the shokunin (craftsman) himself, Uncle Saku Nagaoka, standing proudly behind two wide iron teppanyaki sheets. 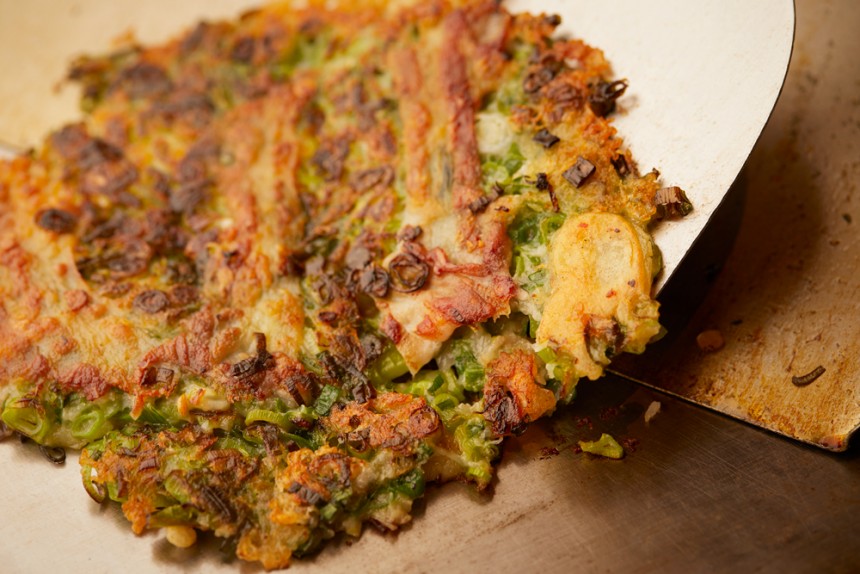 An unassuming man with kind eyes and salt-pepper flecked hair, Nagaoka made his debut into the teppanyaki world rather later in his career; the Kobe-native risked a major career shift after three decades from salaryman to teppanyaki shokunin, without any formal training. When asked why, he simply shrugged and said “[he] liked okonomiyaki so [he] figured why not?” Growing up in Kobe, Nagaoka elaborated that one would be hard pressed to find a neighborhood without at least one teppanyaki joint. “For me, a vital part of my high school memories was rooted in enjoying freshly flipped okonomiyaki (savory pancakes) with my friends, while soaking in the radiating warmth from the open grill nearby. Becoming an okonomiyaki shokunin was not completely unheard of in Kobe because it’s something that has become so enmeshed into our cultural fabric. In a way, I feel as though this is the path I was always supposed to take.” 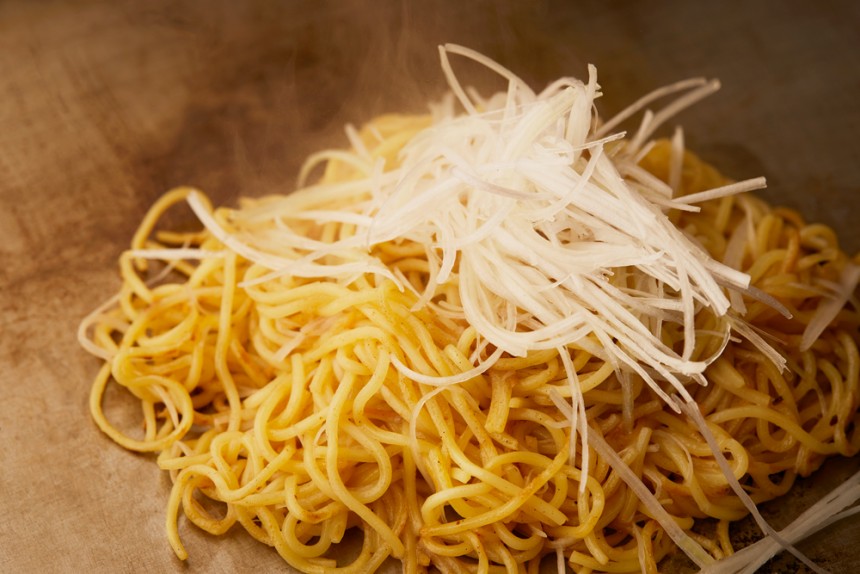 Starting with the basics of dashi-making and knife-sharpening, the hotplate connoisseur built his way up within Kobe’s teppanyaki scene. His first store, Saku Saku in Kobe, became a resounding success. After twenty years or so, Nagaoka opened up shop in Hiroo, making this his second store in Tokyo following his private kitchen Nagaoka Sakumo in Nishiazabu.

Nagaoka’s simple, yet direct approach to life has definitely carried over to his approach towards cooking as well. Dishes like ‘Nagaoka no Okonomiyaki’ (¥1,000) and ‘Negi Yaki’ (¥1,200) are light to the taste while packed with deep, earthy flavours from the shredded vegetables. The secret, he revealed, lies in the flour — or lack thereof; the base layer of Naoagoka’s okonomiyaki features trace amounts of flour and is instead held together by a mixture of minced potatoes, meat, vegetables and konnyaku (yam) infused with katsuo-dashi. The addition of konnyaku, Nagaoka explains, was inspired by his memories of dining at Kansai-style teppanyaki joints which offered a bucket of oden (one-pot stew) next to the grill. 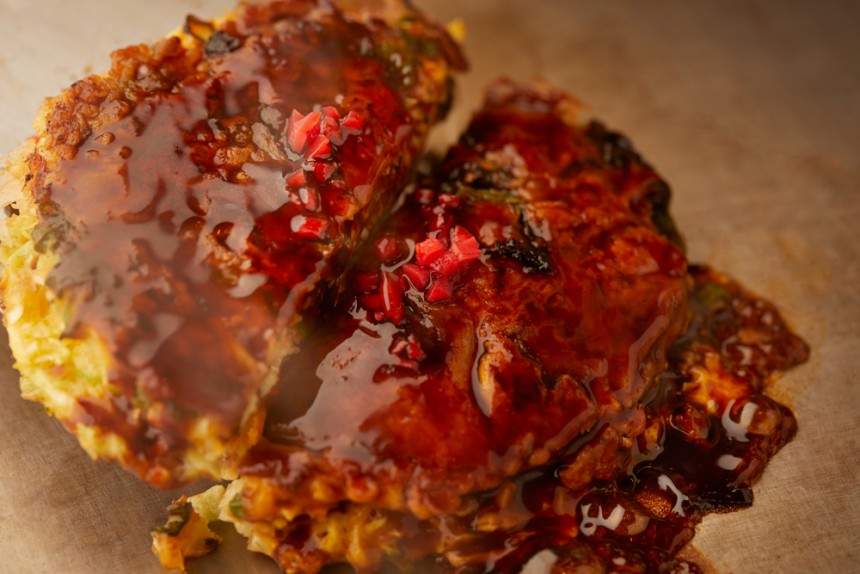 The result is a juicy, texture-heavy dish with crisp, charred edges which manages to tease your appetite, without reaching that point where you feel as though you’ve eaten like a wild bear in preparation for never-ending winter in Northern Canada. Nagaoka purposely aims to create a lighter version of okonomiyaki (specifically two-thirds lighter than regular pancakes), to encourage diners to continue dining at their leisure. For the culinarily adventurous (and perhaps sensory masochists), Nagaoka recommends pairing okonomiyaki with his special homemade spicy sauce — an international blend of Italian peperoncino, Japanese sansho and Thai spices. While this sensitive writer may have blinked back a few tears, the sauce was admittedly instrumental in unlocking another dimension of the savory pancake.

From the dramatic pull of yakisoba noodles into the air, to the way in which the restaurant became engulfed by accentuated sizzles and zaps emitted from the browning raw ingredients, there is a theatrical flair to Nagaoka’s cooking style. As spectators of this performance, most guests are given front row seats to Nagaoka’s orchestra, invited to observe how the conductor tastefully balances the entire ensemble while allowing solo ingredients to shine at different moments. 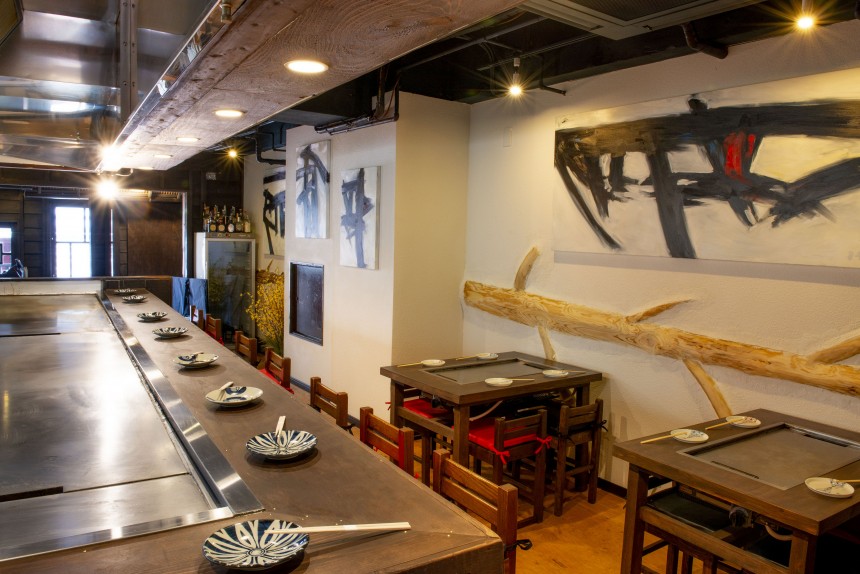 And as a true host, the shokunin couldn’t help but check if the food was up to par; all throughout the night we were constantly reminded to “let him know if anything needed seasoning” or “retouched if it was too bland.” This urge to satisfy our needs perhaps speaks to not only his pride as a craftsman, but his paternal concern to nourish both our stomachs and our souls. As the night drew near to the end, Nagaoka went around to each guest, giving his personal thanks and tying up loose ends of conversations he had throughout the night. When our turn came around, he bid us goodbye with a little parting wisdom as a souvenir: “Tell your readers to come find out what real Japanese soul food is for themselves.”