Traditional Japanese fashion was thrust to the fore this Tokyo Fashion Week, with heavy metal band X-Japan’s frontman Yoshiki Hayashi being given the coveted headliner spot for his new kimono venture Yoshikimono. Those expecting a restrained show in line with Yoshiki’s recent penchant for classical music—which culminated in him even penning a song for the tenth anniversary of Emperor Akihito’s enthronement—were partially correct. The man himself took to the runway behind a hanya mask before playing a highly accomplished piano accompaniment to the show itself—on his own bespoke piano no less. The kimono fashion, on the other hand, harked back to the visual-kei glam metal excess of the 1980s, where the man first made his name. 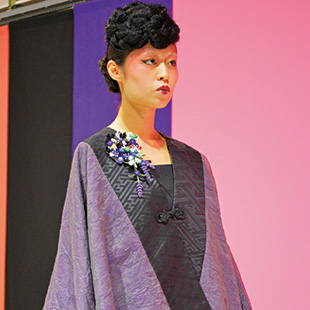 The staples of X-Japan’s stage costumes were out in force, with punk studs turning up on obi belts, lashings of lace, S&M dog-collars, and chains binding the body. Even on the kimono themselves, leopard print, skull, and Chrome Hearts luxury gothic imagery turned up in spades. These were balanced by nods to more traditional Japanese floral motifs, which all built to a sense that Yoshiki was trying—and succeeding—to help a non-Japanese audience connect with the kimono. References like layering a studded black-leather belt on top of an obi belt hammered the point home, although the shiny patent boots, fishnets, and metal-studded bras the models were styled with might have shifted the balance out of the comfort zone of his domestic fans, who were doing a fine job of representing the brand at the venue.

Still, it must be remembered that this was a show not preaching to the converted, but rather trying to reach a new audience who ordinarily would never dream of donning a kimono. Thanks to the headliner status of the Mercedes Benz-sponsored venue, all eyes were on the show. And whatever you made of it, there is no doubt he put the kimono back in the fashion spotlight.

Those yearning for a somewhat more modest way to keep tradition in fashion had plenty of options to choose from, not least Takeshi Kunitomo’s brand Gouk, known by many as part of the H.Naoto stable of subcultural brands. Gouk’s usual strategy to keep young people interested in traditional Japanese fashion is to play to anime and manga fans by building pop-cultural references into the gothic wa mix. This time, however, Kunitomo marked his first-ever showing on the Tokyo Fashion Week schedule with a high-fashion direction, experimenting with a more refined base, and paying literal homage to traditional Japanese fashion by using real antique textiles, many over 70 years old.

The show was packed with on-trend methods for building tradition into ensembles, sheer embroidered textiles were right in line with current Harajuku trends, and yuzen dyeing was deployed for the prints. Even in the styling, Gouk offered new tweaks to age-old classics, building the notoriously tiny traditional Japanese handbags to a scale you could get an iPad in, and styling some looks with Western-style shoes while still providing sandals for those who want them.