The innovators come out at Tokyo Fashion Week

Beta testing seemed to be over for the Tokyo New Age group of fashion designers. Critics of their output last season wanted to see more commercial fashion from the group instead of showpieces that fashion fans might rate highly, but would be a tough sale outside the industry. That said, all things are relative, and the designers packed a punch as they answered with their first-ever fashion week on the official Mercedes-Benz-sponsored Tokyo Fashion Week schedule. 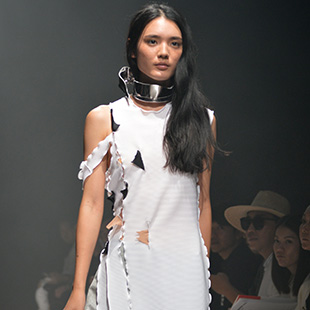 Kicking things off was Soshi Otsuki, whose razor-sharp paneling seemed to be placed at the fore to show that they’re not just good at grabbing people’s attention, but also at backing it up with patterning and technical cutting.

Next, Akiko Aoki’s output graced the catwalk with a showing tailormade to counter accusations that Japanese designers can’t move beyond the kawaii aesthetic currently dominating women’s fashion. Her collection was altogether adult, but still designed with Japanese sensibilities in mind—going so far as to frame the traditional hakama pleated trousers with high slits on the thigh, adding a shade of sensuality to a conservative fashion classic.

Arguably stealing the show at the halfway point was Keisuke Yoshida, whose “Growing Pains” collection became the social media hit of the week with its depictions of the awkwardness of puberty hitting a real nerve with Japanese youth as well as those who … well, just didn’t get it.

In particular, the first look—which paired unfashionable spectacles with a plaid shirt and outdated gothic-print T-shirts still worn by otaku in Akihabara—was tricky for many who thought the designer might have been mocking the subject matter. But the intent was far from that, instead trying to capture the aesthetic of awkwardness. 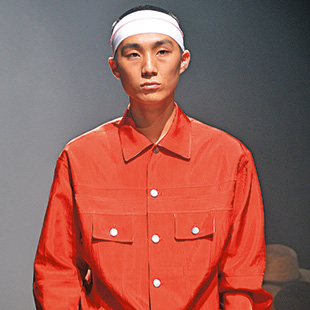 Other great looks included oversized school uniforms with well-judged too-long sleeves paired with sloppy jackets, all worn by scowling models who perfectly captured the petulance of teenage years. At the end of the day, this was fashion designed to push back boundaries, and the fact that fashion is becoming open to more and more aesthetics is probably a good sign that a new age is on the way.

Ryota Murakami continued the show with a nostalgic revisiting of clothes his mother was trying to throw away, again questioning the need of fashion to be in vogue. The idea of clothes being out-of-date—in his mother’s case, deemed only worthy of the bin—was itself blasted with a deliberately iconic collection teeming with warmth.

Finally, Kotoha Yokozawa reminded the audience that they’re all about pushing boundaries with a deliberately shocking collection. It was probably in line with the group’s previous seasons, in that the barely-there leather wraps the models wore are unlikely to be reproduced on the streets of Tokyo. Still, the ease with which the young designer brought out a different side of femininity in her cast of Japanese models using only scraps of leather, marks her out as one to watch.