They take your money and call it culture. The ability of corporate interests to hijack cultural customs and human relationships for profit has subjugated Japanese society. Genuine shows of affection and goodwill have been replaced by emotionless submission to marketers telling you what to buy for whom.

Sounds like a radical conspiracy theory? Perhaps. But let’s be honest, it’s what we often feel about Halloween, Christmas, and all the other holidays that have been overly commercialized in Japan. Whether it be exploiting Santa Claus and the Jack-o’-lantern for marketing campaigns or inventing completely new customs like the Christmas Fried Chicken, corporations seem to be highly skilled at milking money out of these holidays.

However, there is one day that outdoes all the others in commercialization. That’s White Day, the day when men who received Valentine’s Day chocolates are supposed to give back white-themed presents. What makes White Day stand out above the rest is that it’s not merely being exploited for making money; the day itself was invented by the Japanese sweets industry. How was it possible for companies to create an entirely new cultural practice that went on to become a nationwide phenomenon?

The practice of exchanging gifts on Valentine’s Day is said to have been introduced to Japan in the 1930s. Once it entered the Japanese mainstream, it soon developed a unique set of customs that made it distinct from what Valentine’s Day was everywhere else. One such custom was that only women gave chocolates on the day, and men became mere recipients of presents. This presented a problem for sweets companies, which would rather double their revenue by having both men and women purchase their goods.

In the late 1960s, small businesses started marketing their sweets by calling on consumers to “return the favors” for their Valentine’s Day presents. This caught the attention of some larger corporations, who also began to advocate for giving back presents. Confectionery chain Fujiya started selling candies and marshmallows as presents to give back, calling them “Return Valentine.” Fujiya then teamed up with marshmallow maker Eiwa Confectionery in 1973 to sell specialized marshmallows on March 14. 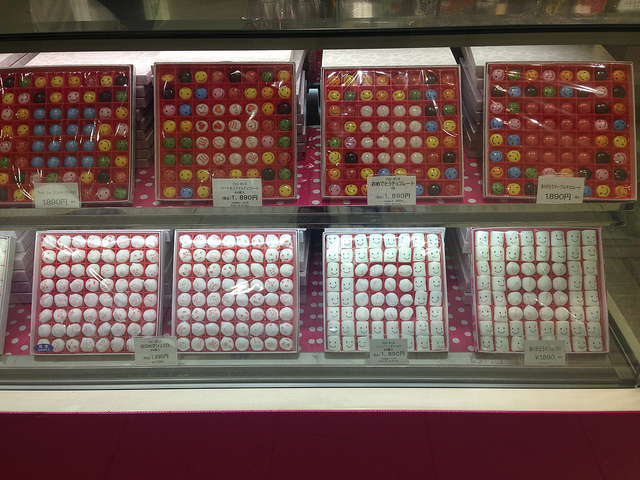 Around the same time, Japanese traditional confectionery maker Ishimura Manseido was in financial troubles. Looking for a way out, President Zengo Ishimura was flipping through a girls’ magazine when he came across an article that lamented the unfairness of only women having to give chocolates on Valentine’s Day. Seeing this as an opportunity, his company soon started planning a campaign to get men to give back sweets. After discussing with retailers, they soon decided on March 14, when business was slowest, as the day to start marketing the new event. The event was named “White Day” after the color of marshmallows, Manseido’s flagship product.

While the idea to give back marshmallows caught the interests of some, White Day wasn’t an immediate success. The day was still a mere PR campaign for the few sweets makers that had adopted the idea, and it was nowhere close to attaining nationwide recognition.

This all changed when presidents of several major manufacturers came together at the Japanese National Confectionery Industry Association to boost sales of candy. They began their first campaign to promote giving back sweets in 1980, with the catchphrase “White Day to answer love.” After annual marketing initiatives at locations like Ginza, the cultural capital of Tokyo at the time, the custom gradually took hold of Japanese society, developing into what we know as White Day today.