She’s known for two of the most infectious pop hits on the planet: “Call Me Maybe” and “I Really Like You,” and it’s not hard to put the upbeat songs together with the singer once you sit down for a chat with Carly Rae Jepsen. The Canadian chanteuse just has a way of lighting up a room with her energy and smile.

The singer came to Tokyo as part of a promotional tour for her new album, E·Mo·Tion, and it didn’t take Jepsen long to get into the vibe of a city she says allows her to “be [her]self.”

“That is always the most amazing part of coming to Japan. Even when I feel I have been away for a while, there is always such a warm welcome and surprise to see people waiting there with signs and cards,” she explained. “It melts my heart.” 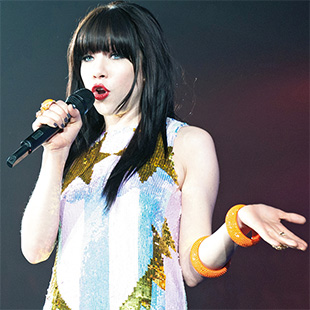 Jepsen has been melting fans’ hearts since 2012 when her runaway hit “Call Me Maybe” catapulted her to the top of the music charts.

The song garnered an astounding 700 million YouTube views and topped the charts in 17 countries. Jepsen said she never intended to release the song as the first single from what would eventually be her Kiss album, but the response from her musical team changed her mind.

“I am always conscious of writing the strongest lyrics that I can, but I would be lying if I would say that I know which song is best for radio, or which song works as a single. Half the time, I pick wrong, and to be honest with you, on ‘Call Me Maybe’ … I did not want that to be the first single. I would not have voted for it until I saw reaction from people like my family and friends.

“I can tell you that, on the week that I sent that song in, I was getting calls at midnight from my publisher and my manager saying, where have you been hiding this one?”

It didn’t hurt having pop sensation Justin Bieber and his then-girlfriend Selena Gomez share the song with their fans via Twitter. In fact, Bieber thought so much of Jepsen that he had her meet his manager, Scooter Braun, who signed Jepsen to his label.

“If there are two people that I owe a lot of my success to, it’s definitely Scooter and Justin. They have definitely come through for me in many ways,” the singer says.

It turned out Braun had a few more tricks up his sleeve when the singer decided on “I Really Like You” as one of the first singles from E·Mo·Tion, and she wanted a unique video.

“We received about 14 different video treatments, and they were all very sweet—but they were almost a little too sweet. I wanted something funny,” she explained. After some brainstorming with Braun, they came up with a plan to have a character play the lead and perform the entire song instead of Jepsen, with her making a cameo at the end.

“We started dreaming up a list of probable characters to do this. While Scooter was at dinner with Tom Hanks, who is a friend of his, he mentioned that he had this artist and she had been after several celebrities to be in her video.”

Jepsen said Tom asked Braun, “Well, what about me?” Braun phoned her with the news.

“I got the phone call about two days before Christmas. I was visiting my parents, and I think I woke up the entire house because I was just screaming. I was so happy and shocked that this was happening!”

Jepsen said she also wanted to take a different approach in putting out E·Mo·Tion. She deliberately took more time to produce the album to give herself time to absorb her success, rather than fall slave to it.

“There would have been [more pressure] if I came out with music right away, which is why I kind of made the decision to delay. I think that the audience and the listener can be more forgiving of that, of you—to give you a breath and some space and to come back with a decisive change.”

Music isn’t her only passion; Jepsen has a love for fashion, although many of her friends question her wardrobe choices.

“That’s the thing I love about Japan: there are no rules. You get to wear what your heart wants. I think that’s where I get to be the most honest version of myself, when I am in Japan. I can just let it go!”