I moved to Japan at age 39 – a year after quitting my full-time lawyering job, with no definite job prospects in the country and with no close friends. Unlike most people, it was not the temples, the manga culture, or the delicious Japanese food that drew me to this foreign land. I was instead fascinated with the often-underrated beauty of Japan’s nature and the countless hiking trails that it offered.

During the three years that I have been living in Japan, each hiking experience, often solo, made me feel more connected to the country. I not only found nature’s beautiful landscape welcoming but the friendly hiking culture has encouraged me to develop a personal connection with Japan’s soil. Year after year, these are the three destinations in Japan that I always count on. From mesmerizing scenery to easily-formed trail camaraderie, all aspects somehow feel unique to Japan. 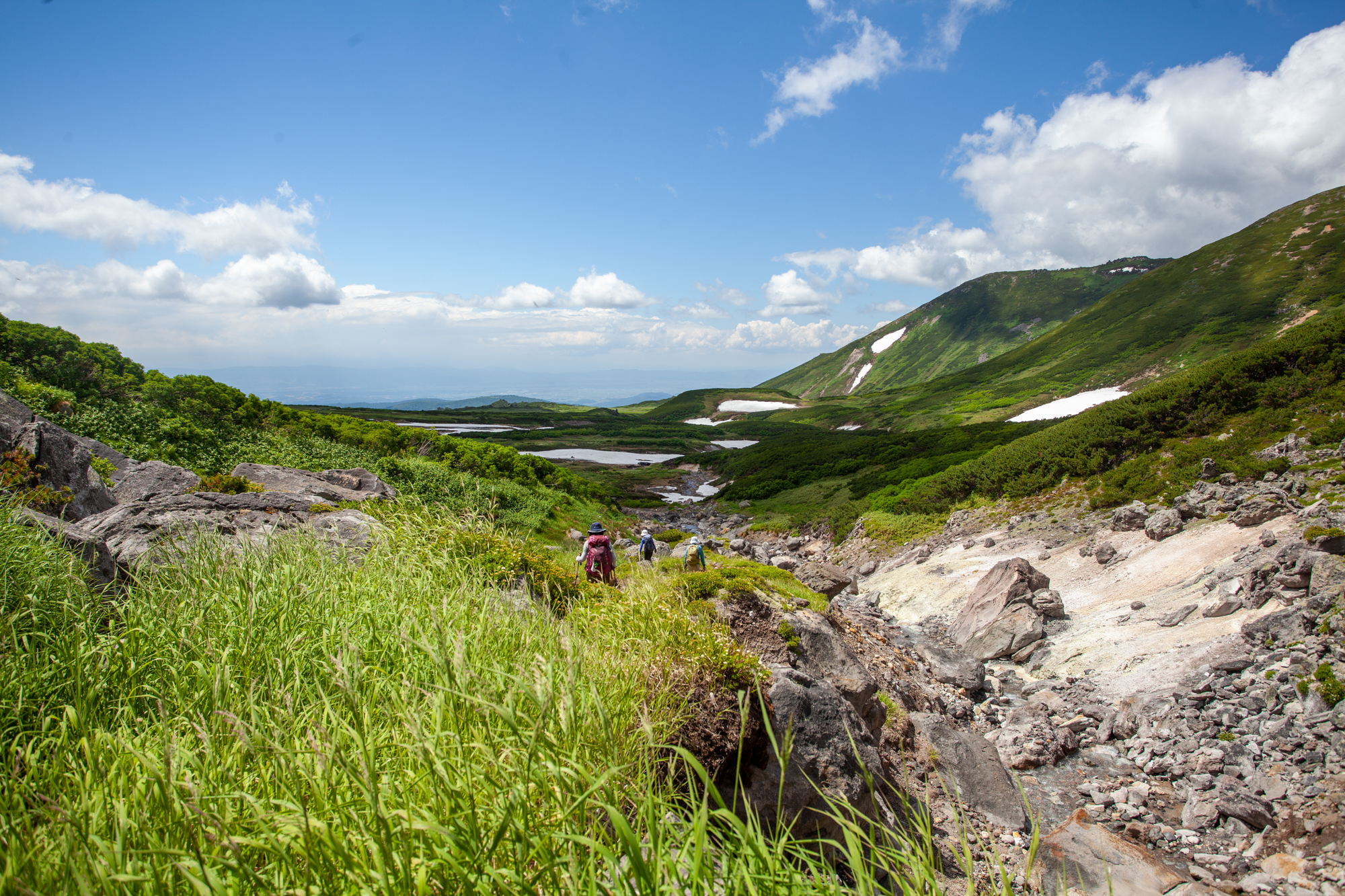 Daisetsuzan National Park is one of the wildest places in Japan

Daisetsuzan, the largest national park in Japan, sits in the middle of the northernmost and wildest island of Hokkaido, Japan, occupying a land area of 2,268-kilometer square. The park is home to numerous trails to explore on day hikes or week-long traverses, pleasing both beginners and advanced hikers alike. Mountain scenery encompasses the active volcano Mount Asahidake, which is also the highest mountain in Hokkaido, flower fields roll endlessly along the mountain-base slopes in summer, and wildlife including grizzly bears thrive. It is also a region that attracts hundreds of solo hikers during the peak summer season (late July-August) who are more than eager to keep each other company and look out for each other. During my solo summer trip to the park, it was not my bear bell but the friendly company of other hikers that gave me the comfort to explore the trails occupied by alpine flowers without being discouraged by the wildlife to which the park is home.

When another hiker had warned us about a bear sighting on my solo hike, it took merely a few seconds to share a moment of connection with two fellow hikers. Luckily, we never encountered a bear on the Asahidake and Nakadake loop route but, had a delightful day chatting with one another throughout.  On another solo hike, I tagged along with an elderly couple after they had noticed that I was wandering into bear-dense territory. Little did I know that (until I overheard their phone call) the couple changed their plans and extended their hike just for me so that I would not have to hike alone in bear territory.

Despite the delightful sense of remoteness that it passes on to its visitors, Daisetsuzan is easily accessible with a direct bus from Asahikawa Airport. In addition, two cable cars are provided to take trekkers all the way up to the main two trailheads — departing from Asahidake Onsen and Sounkyo Onsen. Both of these are tranquil onsen towns, making excellent bases for visitors to the park. 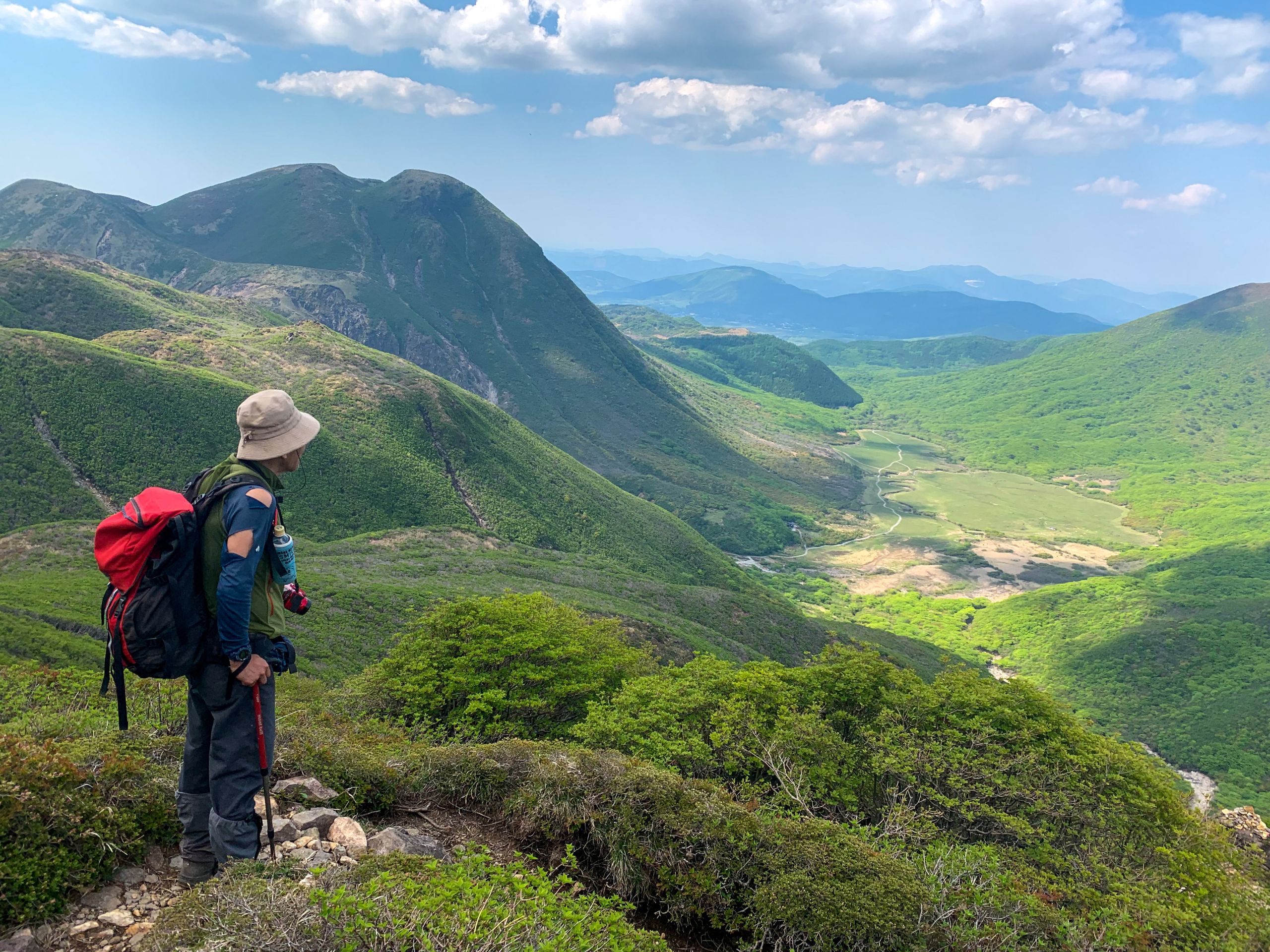 Kyushu, sitting on the opposite end of Japan, is fortunately not home to any bears (last sighting reported in 1987) but is home to many mountains. It is a magical island where hiking trails often demand relatively less effort but still reward those who visit to see the graceful scenery.

As a fairly popular destination in Japan, Kyushu is well-served both by an extensive rail network and sight-seeing buses that also stop at many of the main trailheads on the island. Despite numerous visits to Kyushu, it took me a few years to discover the Kuju mountain range sitting in the northern part of Aso-Kuju National Park. With diverse sceneries, an excellent visitor center, dozens of trails, and a mountain-top onsen that can only be reached by hiking, Kuju is a hiker’s heaven like no other.

Like Daisetsuzan, Kuju has numerous trails involving challenging peaks and easy, flat marshland terrain. With a Heidiland-like scenery with bloomed azaleas, Kuju attracts a number of hikers in late May and early June. Hikers can also spend the night in the Hokkein Onsen, only accessible by hiking, where freshly cooked food, clean rooms, and an onsen awaits. This is the perfect place to mingle with other hikers and exchange trail stories, often in the company of a cold beer.

During my recent May visit to Kuju in search of the azaleas, a fellow hiker from Niigata prefecture and I might have shared an unwise amount of beer to celebrate our safe arrival at Hokkein Onsen. Earlier in the day, we found each other at the trailhead looking down the steep – and understandably empty – trail in a rather perplexed state. We for hours dreadfully negotiated one of the most challenging and highly “unrecommended” routes in Kuju mountain range (Naka-Dake to Hokkein Onsen via Shirakuchi route) finally making our way to the hot onsen and cold beer – a feat that would likely not be possible if it was not for the emotional support that we, as two complete strangers, extended to each other. 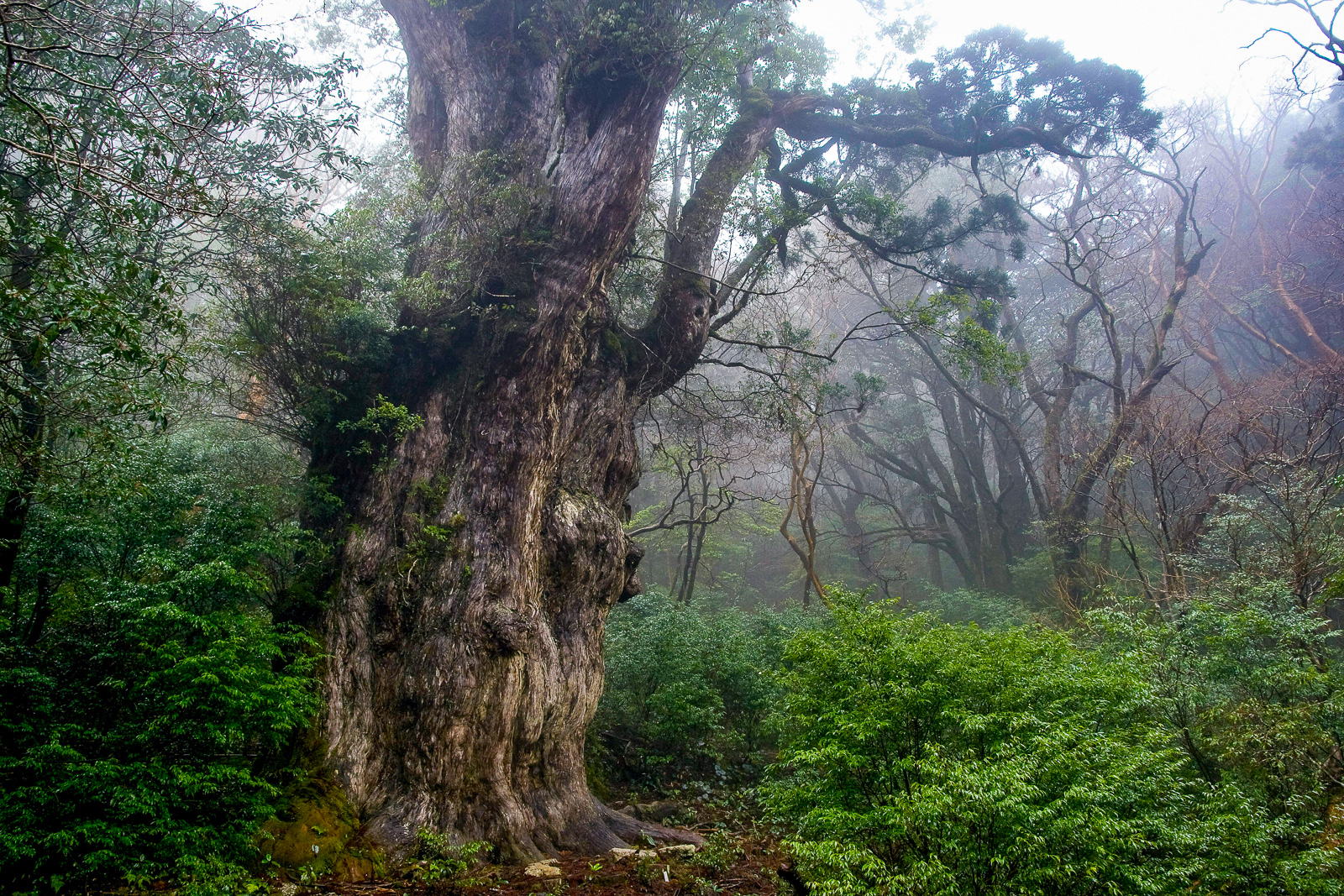 Jomon Sugi, Japan’s oldest tree, is estimated to be between 2000 and 7000 years old. | Credit: touristinjapan.com

Yakushima Island located off the coast of Kagoshima in Kyushu is one of the most well-known hiking regions of Japan. Shiratani Unsuikyo, one of the most popular hiking routes on the island, is believed to have inspired Hayao Mizaki’s Princess Mononoke, released in 1997. This put the island on the radar of not only hikers but also Miyazaki fans all over the world.

Yakushima Island, one of UNESCO World Heritage Sites, has been able to preserve its forests for thousands of years, holding Jomon Sugi, Japan’s oldest tree. Because the island is home to countless trails, explorers will never get bored enjoying a more off-the-beaten-track experience once they wander off the main tracks.

Another alternative to popular routes – which ended up being one of my most rewarding experiences in Yakushima  –  is to explore the island with a road walk that circles the entire circumference of this perfectly heart-shaped island.

I did the walk a few years ago in three days. Trading the forests with a road walk gave me the opportunity to better appreciate the local life on the island and explore often overlooked communities such as Kurio or Nagata, where the seaside scenery can easily compete with the majestic beauty of the island’s forests.

While I did the walk alone, I was pleasantly surprised to be greeted by two other visitors to the island waving and cheering me at the end of my walk. I found out that they – in the comfort of the bus – saw me multiple times during my three-day walk and thought that I deserved a celebratory beer.

These are only three of the many regions of Japan where astonishing sceneries and friendly hikers are ready to welcome new explorers. I would recommend to anyone exploring Japan for its culture to branch out and give the lush landscape a chance. You would be surprised by how much you can learn about this country by exploring its mountains.

Burcu Basar, originally from Istanbul, Turkey, is doing her PhD in Japan in an area that miraculously combines her profession—law—and her passion—national parks. She lives in Tokyo but can often be found in various national parks all over Japan. Follow her journey at bizarrejourneys.com.