The Abduction of Sazae-san

How the beloved Japanese animation was hijacked from the original comic

If there’s something nearly every Japanese person knows, it’s the first two lines of the Sazae-san cartoon opening:

A stray cat stole a fish.

The cheerful Sazae-san is chasing it barefoot. 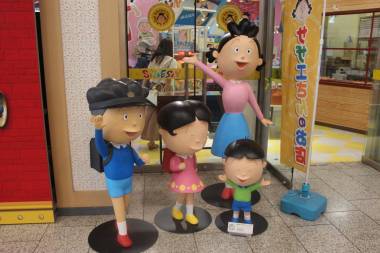 Although virtually unheard of in the West, Sazae-san is possibly the most famous cartoon in all of Japan, and definitely the longest-running animated series in the world—according to the Guinness World Records. The series first aired in 1969 and today stands at over 7,500 episodes. It tells the story of the eponymous Sazae Fuguta, a young housewife who lives in Tokyo with her husband, parents, siblings and child. What she doesn’t do, though, is go chasing stray cats without any shoes on.

At least not anymore.

When the show first started, Sazae was much closer to the character in the intro song or—more importantly—in the comic strip by Machiko Hasegawa, which the cartoon was based on. Much like Hasegawa herself, the early incarnation of Sazae was an independent woman who paid little attention to social norms and generally did whatever she wanted. For example, one early Sazae-san strip shows her buying boxed lunches at the train station because she didn’t feel like cooking dinner for her family that day. She’d also play pranks on her relatives, and even smack the taste out of her younger brother’s or husband’s mouths whenever they angered her.

It might not seem like a big deal, but those things are almost the exact opposite of the dutiful, hardworking Sazae you see on TV nowadays. Sadly, most Japanese people have never seen the flawed, authentic woman that the cartoon opening is alluding to. They only know the flawless housewife version thanks to episodes like the one that aired on the 20th of November 2016, where the absolutely worst thing that Sazae does is put too much delicious, homemade food in her husband’s lunch box. We can only hope the courts went easy on her.

There’s a reason why the show and the comic strayed so far apart.

After years of the Sazae-san cartoon always being there for them every Sunday evening, many viewers started seeing the show as the one constant in their lives amongst a rapidly changing world that understandably scared them a little. It also helped that the animated Sazae and her family live in a nostalgic, timeless utopia without cell phones or computers, where people still regularly wear kimonos, and children who don’t do their homework are considered dangerous delinquents.

It didn’t take too long for audiences to forget all about Sazae-san’s social satire, and demand the sweet oblivion of nostalgia from it. This resulted in episodes where, say, Katsuo (Sazae’s 11-year-old brother) gets super excited about the sweater vest/jacket combo that his mom bought for him. You wouldn’t think that something could be too saccharine and bland at the same time, but there you go.

It’s a real shame, too, because many of the original Sazae-san strips could actually be, well, exciting. Sadly, gone are the days when Sazae would get mugged, or when her neighbor (who raised his children while his wife worked; another thing the cartoon will never show) would deal with a grifter trying to con him out of his money. And you definitely won’t see the cartoon deal with such dark topics as suicide. In one of the most memorable Sazae-san comic strips ever, Sazae spots a dejected female student who’s just failed her school entrance exams, and follows her home to make sure that she doesn’t kill herself on the way.

This isn’t to say that the people of Japan are opposed to the Sazae-san cartoon tackling more mature topics. It’s just that they would probably be very confused if it ever happened, because that’s just not the show they grew up with. To be fair, though, perhaps it’s good that the animated series took some liberties with its source material. For example, they completely ignored the comic’s final volume where Sazae dreams that her entire family is captured and almost eaten by spear-chucking, dark-skinned cannibals. That probably won’t go too well these days.