Though many fans of Aldous Harding seem determined to unravel meaning from the cryptic lyrics, stylistic choices in the music videos and layers of sound in her surreal songs, seeking answers in interviews with the New Zealand-born musician is a futile exercise. Harding doesn’t neatly pinpoint reasons for her choices or actions — or even claim to have any. As Metropolis caught up with her ahead of her upcoming Japan debut this December, her answers — like her music — were carefully crafted, hovering between playful wit and raw honesty. And, as she paused, restarted and reworded, were charged with that same elusiveness that shrouds her art.

Metropolis: A lot of your music’s lyrics are quite poetic. Are there any particular poets or other songwriters that you admire? Do you think you take any inspiration from them?

Aldous Harding: I admire lots of people for being who they are or what they are, but I can’t make a direct line from what they do and what I do in any way. I just can’t. And if I tried to go through and cut through the grease of what’s happening right now, we’d be here for a long time. I couldn’t even begin to give you an example — and that’s the truth.

M: In an interview with FaceCulture, you mentioned that before you discovered your music career, you wanted to teach English in Japan. What was it about Japan that sparked this idea?

AH: I grew up for a while on an organic farm where we would have people come and work on the farm from different countries and cultures, and we would have a lot of Japanese people come. They would always bring little gifts and they were very open. I just found them incredibly open and kind. I think Japanese culture is incredibly interesting and beautiful and I suppose that I wanted to be inside of that. When you come from a place like New Zealand that’s so far away from anywhere else there’s a desperation to — It’s like anywhere really, anywhere else feels pretty exciting. Of course, I watched a lot of Japanese cartoons and things, and there were things that I saw that I still think about when I’m eating– like things just stick in your mind. I also wanted to do something academic because I come from such a creative family, but it turns out that I don’t have — as you may have guessed — the focus for retaining and then sharing information. Yeah, I don’t know, but I think you’ll find a lot of people are sort of mesmerized by your world [Japan] and what it’s really like.

M: So how does it feel to have this chance to now be playing a gig here in Japan? 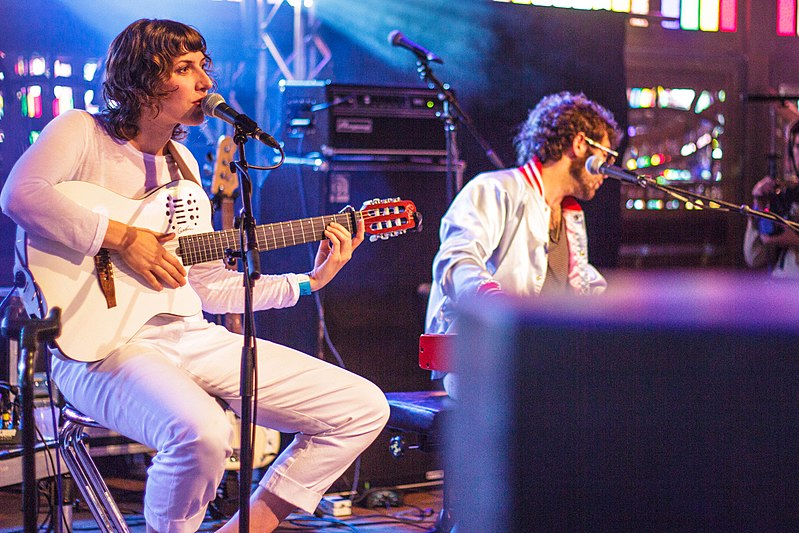 M: Watching your live performances is really captivating. What do you like about performance and how do you get yourself into such a focused zone beforehand?

AH: I’m always focused. This [music] is one of the only things I’ve been able to apply any kind of focus and useful neurosis to. I’m always focused, but what I like about performing has changed. I know you wouldn’t think it, but I’m quite a bit shier than I was before. And in being more open I’ve opened myself up to other things. I also think allowing myself to be more accessible and more sensitive comes with its own comfortability, success and happiness. It never really takes over, it just changes feet like a horse that shifts its weight and picks up one foot and puts the other down. So, when some things become easier other things arrive to meet it. Do you know what I mean? And so the things I enjoyed before I don’t have so much now. But the thing that I enjoy at the moment is that here’s an unremarkable person doing remarkable things purely from their own will and effort.

M: Does that make you a remarkable person?

AH: I don’t know, but I guess if that is true, then that’s what I like, that anybody can do it. And now that I hear myself say that, it’s sort of what Designer is. Anything can be a designer of worth.

M: I can understand that. So if you don’t need to spend time focusing before performing, how do you usually spend time before a show? Do you explore new places when touring?

AH: If time allows it I like to. When people ask you what I enjoy doing — and I think you’ll understand this: the difference between what I enjoy doing and what I actually do are very different. So, for example, people say, “How do you — What do you enjoy doing?” Okay, well I sit down with takeaway food and I watch a film. Right? But I don’t necessarily leave that action feeling fulfilled and calmer than before. That’s just what I do because it’s habit or it’s what I think will make me feel better. What actually will make me feel better — and what I ultimately enjoy more — is moving around and seeing new places and meeting interesting people. That’s when I feel fulfilled. But it’s not what I do very often, and I couldn’t tell you why. And I think we’re all like that. So, before a show, I intentionally fall into those habits still, and I will sit in my dressing room and iron my clothes and yes, stay in my bubble I suppose. It’s not necessarily the best thing but it’s just what I do — and also smoke a lot of cigarettes around the corner on my own. 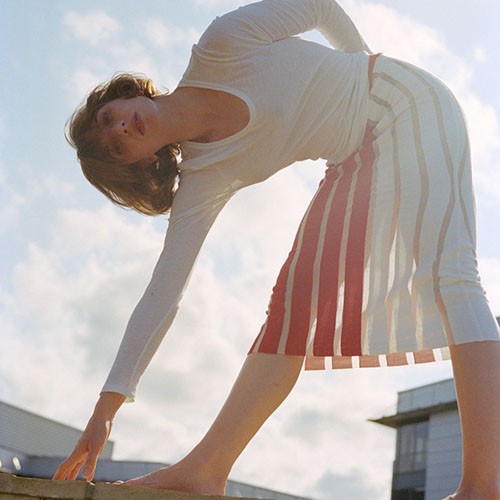 M: I think a lot of people feel that way. What have you learned since you started your music career?

AH: Jesus. It’s a big one. Well, it’s the more I learn the more it opens up things to be learned in its place. I think it’s hard to accept it and hard to learn anything when I don’t really know the point. I don’t mean that in a nihilistic kind of way, it’s just I don’t really know the point. Is the point to feel good? To be happy as much of the time as I can? If that’s the point then I’ve learned that I’ve got to look after myself as opposed to — but even then, if I neglect the creativity to look after myself then the artist suffers in me. And then if I spend too much time nurturing the creativity then the woman suffers in me. And I know that they are one and the same, but you know what I mean? Trying to stay sensitive and poetic sometimes means that the part of you that just needs to be normal can’t thrive, and vice versa. So, I think the biggest thing I’ve learned is to not judge yourself. Don’t judge yourself because that’s too much pressure and not everybody performs well under pressure. That’s what I’ve learned. Not everybody needs to feel like somebody, you know?

AH: It’s both. It’s like when you’re creating something with somebody else and you’ve let them in. It’s sort of like a child, and you try to be on the same page and you try to each inject the things that you know and the things that you think are going to help or work. But it’s like with a baby: when it’s yours you know if it’s too hot or it’s hungry or angry — it’s a very specific intuition, so you just sort of figure it out. You can’t really know — like parenthood I imagine — you can’t really know what to do until you do it, and someone will say something and you’ll go and try again. Go fish. Sometimes it makes sense to you. And I trust John [Parish.] I think he knows me musically better than anybody. It’s because I’ve given him that chance. And I don’t look back really because what would that do? I’ve made that decision. There’s a partnership and I trust that and we just do it together. That works.