Embedded in a mound of dirt, leaves and moss, two naked bodies — or, at the very least, human-like forms of spine and flesh — emerge from slumber and crawl toward each other at excruciating speeds in the dark. When the dancers meet, they remain silent as their stomachs, backs and arms intertwine. The scene is a creation myth, or it’s a love story.

The mysterious works of husband-and-wife dance duo Eiko Otake and Koma Otake span over four decades and several countries. Since meeting in 1971, the duo has showcased its eerily primal and exquisite, butoh-inspired dances at various notable venues, garnering international praise. In 2013, longtime fan and Pulitzer Prize-winning American poet Forrest Gander published Eiko & Koma. The 20 poems in Gander’s book render the duo’s performances into literature through an unusual and precise feat of ekphrasis. 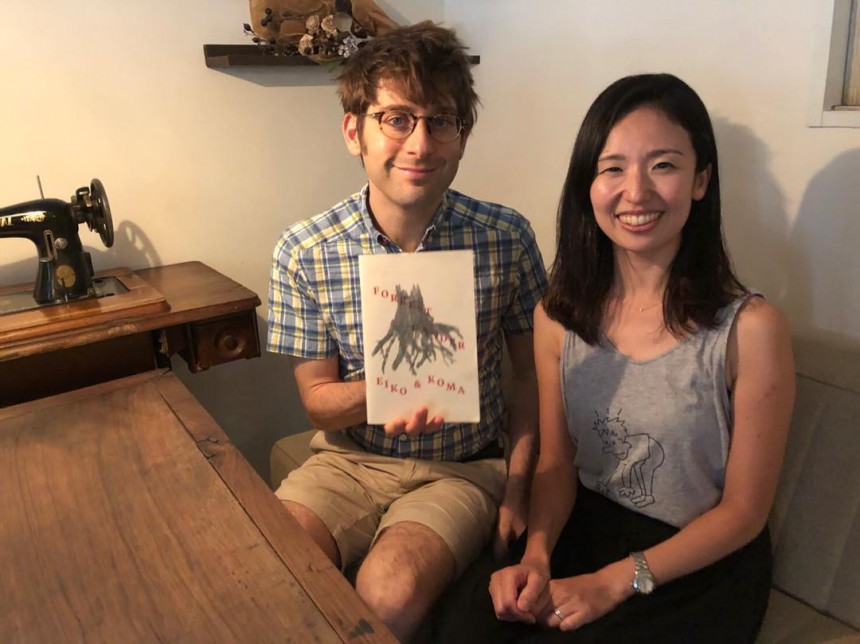 Owing to its bilingual nature, Awai’s edition is a particularly playful read. With motion, stillness and the human body as core subjects, the poems are naturally visual. “Faithfulness” spirals down three pages, with stanzas shifting left to right like vertebrae in a veering spine. Gander’s records of movement, as minute as a dilating nostril or a flexing toe, are meticulous, imaginative and in constant flux: “… four buttocks a / madrigal pear shifting / equilibrium of force / as he disencoils her.” Each translation impeccably mirrors Gander’s original form, the syntax expertly rearranged to preserve not only meaning, but shape. Side by side, the English and Japanese poems appear as two synchronized bodies engaged in a quiet, linguistic duet.

Just as dance operates through the corporeal, Eiko & Koma wields language to convey philosophies beyond the body. Like a camera zooming in and out of an otherworldly stage, the poet extracts hours and milliseconds from performances whose silent, spasmodic and animal activities are at once purely physical and transcendent — a “feral pas de deus” as Gander calls it. “Breath” is one of the book’s most powerful pieces. Based on a performance of the same name at New York’s Whitney Museum of American Art in 1998, the poem contemplates the awakening of two bodies within an Edenic terrain pared down to leaf and dirt: “Early draft of the world. Or / has all that came before / made them / its repository?” 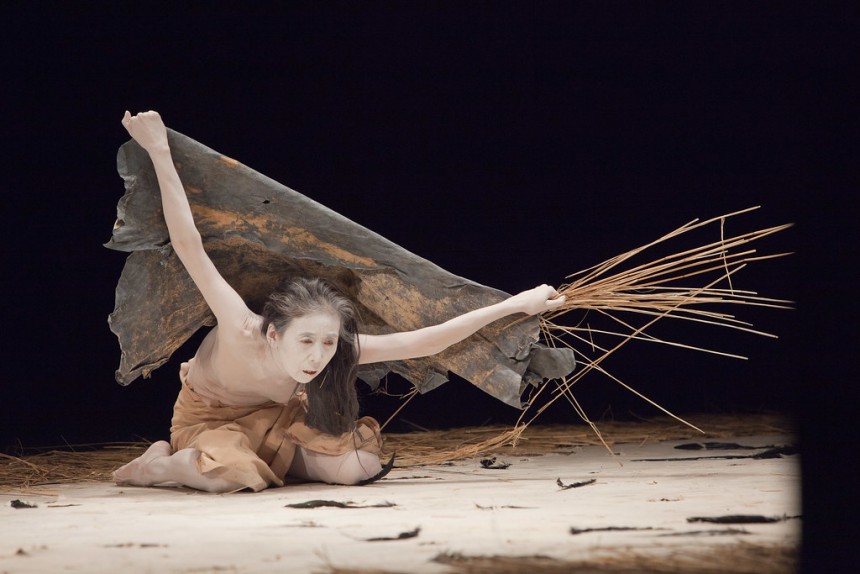 Themes of genesis, consciousness and love emerge through Gander’s evocative renderings of two bodies unaware of ego, gawking and naked, coming together and breaking apart in a sort of strange, primordial tango. In the first poem of Four Quartets, T.S. Eliot describes dance as representative of timelessness and the sublime when he says, “At the still point of the turning world. Neither flesh nor fleshless; / Neither from nor towards; at the still point, there the dance is.” A similar pause exists in Gander’s “Entanglement” when he writes, “Two figures and / the caesura of / longing. Bound by what is / unwritten …”

Like Eliot’s “still point,” Gander’s “caesura” reveals itself in the corporeal and its immeasurable contents, expressed at once and synchronized between a pair of humans whose motions bring to light the internal and unknowable, and whose sacred bond continuously exceeds their physicality.

Awai’s English-Japanese edition of Eiko & Koma is available on Amazon. To celebrate the release, Awai will hold a free event at the National Museum of Modern Art in Tokyo on August 24, from 6pm to 7:30pm. Eiko Otake and Gander will appear for a rare performance, and both translators will be present for a reading.